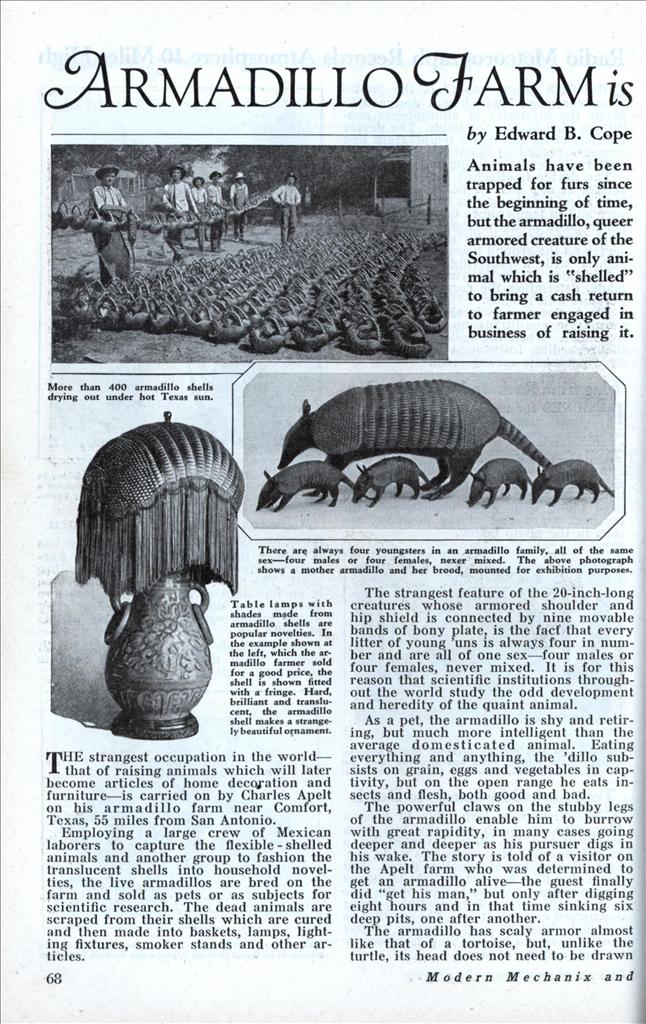 by Edward B. Cope

Animals have been trapped for furs since the beginning of time, but the armadillo, queer armored creature of the Southwest, is only animal which is “shelled” to bring a cash return to farmer engaged in business of raising it.

THE strangest occupation in the world— that of raising animals which will later become articles of home decoration and furniture—is carried on by Charles Apelt on his armadillo farm near Comfort, Texas, 55 miles from San Antonio.

Employing a large crew of Mexican laborers to capture the flexible – shelled animals and another group to fashion the translucent shells into household novelties, the live armadillos are bred on the farm and sold as pets or as subjects for scientific research. The dead animals are scraped from their shells which are cured and then made into baskets, lamps, lighting fixtures, smoker stands and other articles.

The strangest feature of the 20-inch-long creatures whose armored shoulder and hip shield is connected by nine movable bands of bony plate, is the fact that every litter of young ‘uns is always four in number and are all of one sex—four males or four females, never mixed. It is for this reason that scientific institutions throughout the world study the odd development and heredity of the quaint animal.

As a pet, the armadillo is shy and retiring, but much more intelligent than the average domesticated animal. Eating everything and anything, the ‘dillo subsists on grain, eggs and vegetables in captivity, but on the open range he eats insects and flesh, both good and bad.

The powerful claws on the stubby legs of the armadillo enable him to burrow with great rapidity, in many cases going deeper and deeper as his pursuer digs in his wake. The story is told of a visitor on the Apelt farm who was determined to get an armadillo alive—the guest finally did “get his man,” but only after digging eight hours and in that time sinking six deep pits, one after another.

The armadillo has scaly armor almost like that of a tortoise, but, unlike the turtle, its head does not need to be drawn into the shell because the armor covers the ‘dillo right down to the nose. Compared with the turtle, the armadillo is the “flying tank” of the animal kingdom. The only mammal with bony plates, the armadillo—which is the diminutive for “armed” in Spanish—is found from Central America up on through Old Mexico to southwest Texas, especially in the hill country of the Lone Star State. The armored creature is principally a night rover who lives in a burrow several feet underground, except in captivity, as on the Apelt armadillo farm, where they are housed in well-ventilated sheds. The animal races quickly across the fields on its strong claws and with its exceptionally acute hearing makes it a difficult quarry for its hunters.

“Bring ’em back alive—if possible,” Mr. Apelt instructs his 50 Mexican hunters shortly before the group scours the moonlit highlands of southwest Texas for their bony-plated quarry. A half dozen specially trained dogs accompany the “expedition.” After an armadillo is held at bay, a hunter will rush up and strike the solid ball of bony plates a blow on the head and then will put the stunned animal in gunny sacks.

When the hunters return to the Apelt farm—usually the morning following the drive—the dead armadillos are immediately skinned, or, more specifically, “shelled”; the wounded animals are killed, while others are stuffed, kept for breeding purposes or sent to laboratories.