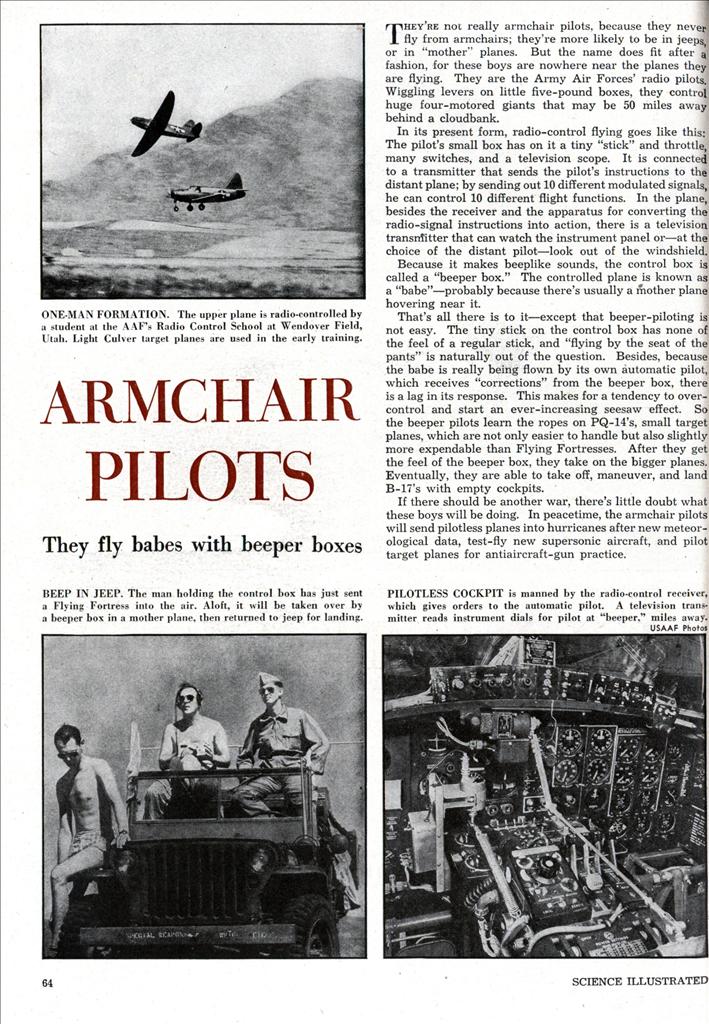 They fly babes with beeper boxes They’re not really armchair pilots, because they never fly from armchairs; they’re more likely to be in jeeps, or in “mother” planes. But the name does fit after a fashion, for these boys are nowhere near the planes they are flying. They are the Army Air Forces’ radio pilots. Wiggling levers on little five-pound boxes, they control huge four-motored giants that may be 50 miles away behind a cloudbank.

In its present form, radio-control flying goes like this: The pilot’s small box has on it a tiny “stick” and throttle, many switches, and a television scope. It is connected to a transmitter that sends the pilot’s instructions to the distant plane; by sending out 10 different modulated signals, he can control 10 different flight functions. In the plane, besides the receiver and the apparatus for converting the radio-signal instructions into action, there is a television transmitter that can watch the instrument panel or—at the choice of the distant pilot—look out of the windshield.

Because it makes beeplike sounds, the control box is called a “beeper box.” The controlled plane is known as a “babe”—probably because there’s usually a mother plane hovering near it.

That’s all there is to it—except that beeper-piloting is not easy. The tiny stick on the control box has none of the feel of a regular stick, and “flying by the seat of the pants” is naturally out of the question. Besides, because the babe is really being flown by its own automatic pilot, which receives “corrections” from the beeper box, there is a lag in its response. This makes for a tendency to over-control and start an ever-increasing seesaw effect. So the beeper pilots learn the ropes on PQ-14’s, small target planes, which are not only easier to handle but also slightly more expendable than Flying Fortresses. After they get the feel of the beeper box, they take on the bigger planes. Eventually, they are able to take off, maneuver, and land B-17’s with empty cockpits.

If there should be another war, there’s little doubt what these boys will be doing. In peacetime, the armchair pilots will send pilotless planes into hurricanes after new meteorological data, test-fly new supersonic aircraft, and pilot target planes for antiaircraft-gun practice.