Interesting article about all of the communications demands (radio, telegraph, crypto, etc) of an army division during WWII. 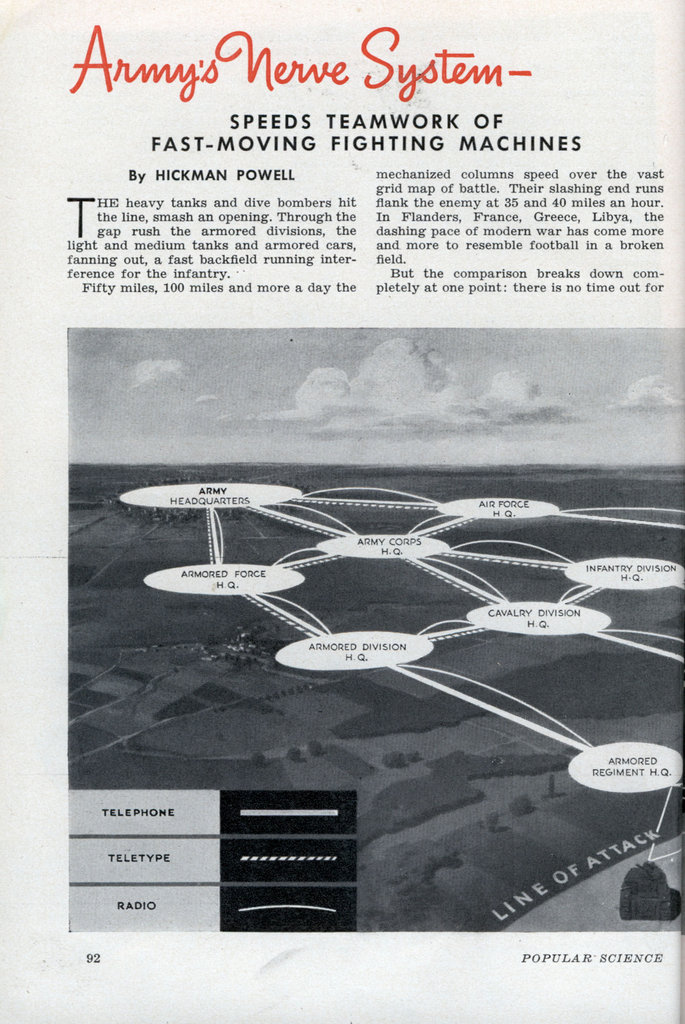 THE heavy tanks and dive bombers hit the line, smash an opening. Through the gap rush the armored divisions, the light and medium tanks and armored cars, fanning out, a fast backfield running interference for the infantry.

Fifty miles, 100 miles and more a day the mechanized columns speed over the vast grid map of battle. Their slashing end runs flank the enemy at 35 and 40 miles an hour. In Flanders, France, Greece, Libya, the dashing pace of modern war has come more and more to resemble football in a broken field.

But the comparison breaks down completely at one point: there is no time out for a huddle between plays. Signal communications, the army’s nerve system, must be maintained at breakneck speed continuously. Observation planes, bombers, scout cars, tanks, artillery, infantry must remain in quick, instant contact with the high command; otherwise an integrated, intelligent striking force becomes a disjointed rabble. The marvels accomplished by the German Army in the last two years have set our political orators shouting for tanks, planes, gunsâ€”a cry with which everybody agrees. But every military man knows that the real marvel of the German assault has not been merely its preponderance in engines of war, but also the precise coordination with which this vast amount of equipment and manpower was used.

The Germans learned their lesson in 1914. Entering the first World War with a primitive signal corps comprising only nine battalions of telegraph troops, they failed to carry out their original assault according to plan, largely because their communications broke down. No such fault developed in 1940, though lines of communication were stretched far beyond what seemed their breaking point. That army’s nerve system extended to its very fingertips, as exemplified in the attack on Fort Eben Eael. The sudden fall of that stronghold was one of the shocking mysteries of the attack on Flanders, but it became less mysterious when word came through that the assaulting engineers, tanks, and air force were in contact by radio throughout the attack with parachute troops landed inside the fortifications. Even with this intensive use of radio, wire channels were not neglected. Right behind the tank columns came the signal trucks, unrolling their telephone and telegraph wire.

Today the Signal Corps of the U. S. Army, under Major General Joseph O. Mouborgne, is engaged in an expansion program big and complex enough to wrinkle the brow of any industrialist. America’s vast prospective motorized and mechanized Army must be provided with a communications system of multiplicity and complexity undreamed of in the World War. For every time you double the speed and mobility of a military outfit you multiply its communications problem. And the new miracles of radioâ€”used only when more secret message channels are not available, must be superimposed on all the old, sure methodsâ€”telegraph, telephone, pyrotechnics, messengers, and pigeons.

Some notion of the task involved may be obtained by merely glancing at the radio equipment of a single armored division. The United States armored division is at present composed of approximately the following forces, all carried by armored vehicles:

A headquarters (in three echelons, which in operation may be separated by as much as 60 miles); 1 reconnaissance battalion; 1 armored brigade of three tank regiments, two light and one medium; 1 infantry regiment; 1 battalion of field artillery (four batteries); 1 battalion of engineers; 1 signal company; and service elements.

To perform its mission, and make it instantaneously responsive to commands while operating at high speed, this aggregation of striking power has basic signal equipment of about 700 radio sets, not counting those of cooperating observation planes and dive bombers. Each commanding officer is connected with his subordinates, and cooperating units of infantry, artillery, and air force maintain liaison, through a system of nets tuned to separate radio frequencies.

The number of nets required for this system is a total of at least 41, plus a number of ultra-short wave channels for short-range voice transmitters within infantry and artillery units. Remember that this is just for one division, a relatively small part of a modern field army. Take an armored corps of several divisions, follow it up with motorized divisions and divisions of foot soldiers; then put a hostile army in the same field, also using radio; and you have an air traffic problem which makes the difficulties of the F.C.C. with wave lengths seem like child’s play.

Only the most rigid control and precise calibration of instruments prevents this system from becoming a mere babble of waves in a jammed atmosphere. Most of the sets operate as silent receivers, authorized to transmit only in emergencies. Even so, the whole matter takes on a complex precision which is almost beyond the imagination of those of us accustomed only to the fuzzy tuning of our home radio sets. The frequencies used, and the techniques of avoiding confusion, are among the closely guarded secrets of the Signal Corps. But one method which seems sure to make forward leaps is frequency modulation, the new staticless form of radio. FM not only adds new channels; it also eliminates the interference set up by the ignition of thousands of near-by gas engines.

As thus shown in the Armored Force, and also in the air squadrons, the instruments of communication tend today to come more and more into the hands of the combat soldier, intensifying the Signal Corps’ role as a body of specialists superimposed on the Army’s basic organization. The most striking example of this is the tiny voice transmitter, powered with dry cells, known as the “walkie-talkie.” Carried in a pack, this little radio telephone weighs only 25 pounds, half a soldier’s ordinary load.

Obviously adapted to such melodramatic uses as those of parachute troops or small reconnoitering parties, the “walkie-talkie” has far more basic value. The artillery, for instance, has responsibility for maintaining liaison with the infantry it is supporting; and in the World War more artillerymen were shot in repairing telephone lines to the trenches than in any other way. Today such losses would be unnecessary. When the wires go out, the radio takes over.

Twenty years ago, when the infantry first asked for the development of a radio which one man could easily carry, the idea was an utter technical impossibility. But years of research by the Signal Corps laboratories, as well as by industrial designers who worked out the little spot-news broadcasters used by the radio chains, have developed devices of amazing simplicity.

Today the walkie-talkie is standard equipment for front-line troops, and is but the smallest of a whole family of instruments grading up to the heavy fixed-station transmitters, all specially and ruggedly designed for rough usage in the field. In the World War, a radio station was a heavy affair with a gas engine and hundreds of pounds of equipment. Today, a front-line transmitter with range of several miles is hardly twice the weight of a walkie-talkie, its antenna is a small loop, and its power is provided by a tiny generator turned by hand cranks.

The signal service of a field army includes two signal battalions and several specialized companies; an army corps has one signal battalion; and each division has a signal company attached to headquarters. These units, broken down into specialized platoons and small teams, are capable of a great variety of simultaneous operations.

Ordinarily the Signal Corps amounts to about three percent of the Army, but under the pressure of the last few months it has expanded even more rapidly than the military establishment as a whole. Last spring it amounted to 35,000 men and 1,300 officers, exclusive of National Guard units, and its training post at Fort Monmouth, N. J., had multiplied from a strength of only 800 to nearly 12,000.

Here signal technicians are being turned out by mass production. The Signal School gave specialized three-month courses during the last year to more than 3,000 enlisted men and officers, and is scheduled to put through at least 6,000 more during the year just beginning. For newly inducted men a Replacement Training Center was opened in March, and in the next three months gave basic training to nearly 6,000 as linemen, radio, teletype, and telegraph operators.

Fairly competent operators, for radio, telegraph, and teletype, can be turned out in three months; and they speed up with further practice. Accuracy is the primary thing, for a military message has no sense to guide a man in sending it. Except when an armored column is moving so fast that secrecy is no object, and radio can be “in the clear,” military messages are sent in code (with groups of letters substituted for other meanings) or in cipher (with letters substituted for those of the actual message so as to make an apparently incoherent jumble). The typical military message is a sequence of five-letter “words” which are merely mixtures of letters with no apparent meanings. The Signal Corps has mechanical devices which speed up the process of mixing and unmixing the cipher, but that is no help to the operator, who must be continually transmitting a letter-perfect stream of alphabet soup.

The ingenuity of cryptography is exceeded only by the art of cryptanalysis, the solving of the secret ciphers of the enemy. This whole field is one of the special concerns of the Signal Corps, not only as to maintaining the security of its own messages, but also breaking down and reading the codes of the enemy. The enemy is supposed to be so good at this kind of puzzling that any code can be broken down in from six hours to three days at the most. In enciphering messages it is routine, in addition to changing the key frequently, to change the method of jumbling the letters, after every five words.

Attached to each field army is a radio intelligence company, capable of operating many stations on a 24-hour basis to intercept enemy messages, and also a number of radio direction-finding stations over a front of 35 miles. A radio direction finder, with a loop antenna rotating on a vertical axis, is able to take a precise bearing on any selected station. With two or more such bearings from different points, the location of an enemy transmitter may be obtained very quickly, in much the same manner as ships navigate by radio bearings.

America has real reason, in this emergency, to be thankful that its communications system is the most highly developed in the world. Its related industries have developed rapidly during the last quarter century, and all the new devices of printers, teletypes, facsimile, multiple circuits are quickly adaptable to army use, to carry the heavy traffic between headquarters. The skills of wire management and maintenance are so widespread that it is almost no problem to get the men for the job.

But radio is the competitive frontier, and here at the moment there is no reason for complacency. A nation of knob-turners does not thereby become a nation of radio technicians. Repair for the radios of thousands of tanks is bound to become one of the Army’s greatest problems.

But that need won’t become acute until the tanks start rolling off the assembly line, and then the radio industry will really come into its own as a basic factor in defense. America can tell the world that its radio industry produced 11,000,000 radio sets last year, and 110,000,000 tubes, an increase of 2,000,000 sets from the year before. These small army portable sets are not very complex. The industry can easily supply them, and repair men too.