For the life of me I can’t figure out what rules these people use to decide what to capitalize in their headlines. If you want to put the important words in all-caps, fine. But why is the word “the” lower case when the word “By” has one cap? 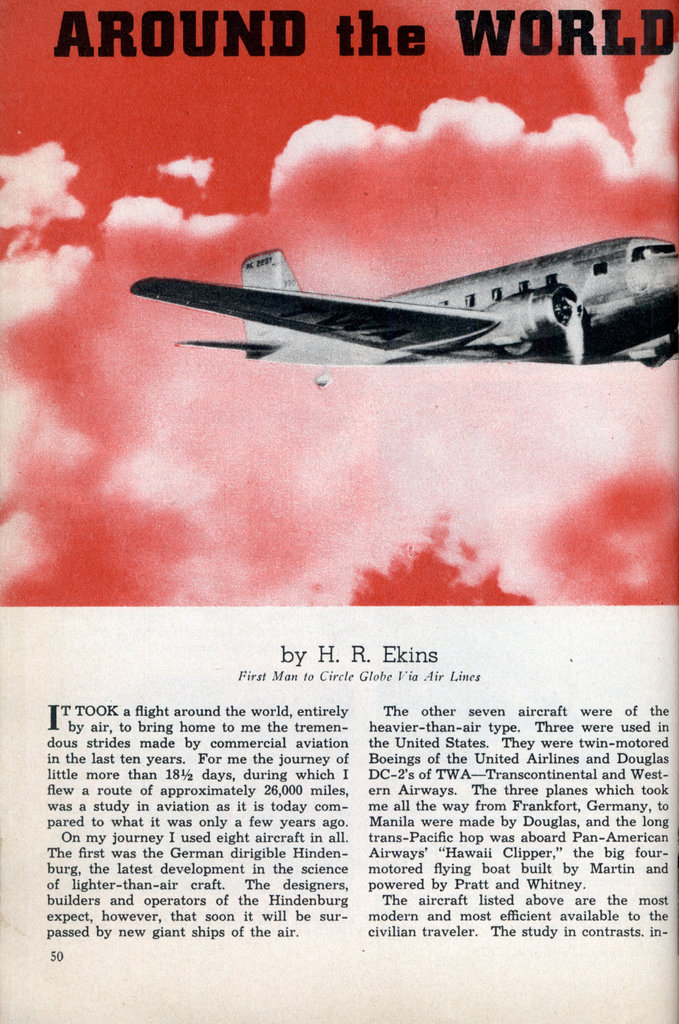 AROUND the WORLD By AIR

IT TOOK a flight around the world, entirely by air, to bring home to me the tremendous strides made by commercial aviation in the last ten years. For me the journey of little more than 18-1/2 days, during which I flew a route of approximately 26,000 miles, was a study in aviation as it is today compared to what it was only a few years ago. On my journey I used eight aircraft in all. The first was the German dirigible Hinden-burg, the latest development in the science of lighter-than-air craft. The designers, builders and operators of the Hindenburg expect, however, that soon it will be surpassed by new giant ships of the air.

The other seven aircraft were of the heavier-than-air type. Three were used in the United States. They were twin-motored Boeings of the United Airlines and Douglas DC-2’s of TWAâ€”Transcontinental and Western Airways. The three planes which took me all the way from Frankfort, Germany, to Manila were made by Douglas, and the long trans-Pacific hop was aboard Pan-American Airways’ “Hawaii Clipper,” the big four-motored flying boat built by Martin and powered by Pratt and Whitney.

The aircraft listed above are the most modern and most efficient available to the civilian traveler. The study in contrasts, in sofar as airplanes were concerned, began at Frankfort when I boarded a big Douglas airplane operated by KLMâ€”Royal Dutch Airlines.

Six years ago, when I was flying around the Far East as a war correspondent for the United Press, the most powerful of the air-cooled radial engines of the Wright Cyclone type, were rated at about 525 horsepower. In 1930 it was believed, on the basis of experience and research with the material then available, that it would be decidedly impractical to build an engine rated at more than 600 horsepower and still maintain even a vestige of dependability. Dependability in those days meant an engine that would operate for 250 hours between routine overhauls. By 1931 the power of the Wright Cyclone was increased to 575 horsepower by using slightly larger cylinders to obtain increased cubic inch displacement. During the same year advances in metallurgy and knowledge led engineers to believe that they had underestimated the possibilities of engines of the radial type.

To jump a bit to the advances which had been made by the time I was ready to take off from Frankfort for the Orient I should like to point out the following:

All the way from Frankfort, Germany, to Batavia, Java, flying in only two planes, I flew behind 890 horsepower F-50 Cyclone engines. The plane of the Royal Netherlands-Indies
Airways, which took me from Batavia, Java, to Manila, was powered with 715-horsepower Cyclones. When TWA flew me across the continent on the last leg of the journey they used a Douglas plane, the Sky Chief. It was powered with F-50 Cyclones of an 890-horsepower rating.

The series F engines go back to 1932 when the Wright Aeronautical Corporation announced the development of engines rated at 700 horsepower at sea level. They weighed only two-tenths of a pound per horsepower more than the one pound per horsepower weight which the late Thomas A. Edison said was ideal for an aircraft engine. The success of the Cyclone F was immediate.

Its first commercial application was in the fleet of Douglas Airliners with which TWA equipped itself in 1934. The American and Eastern Airlines followed suit. Strangely enough, most of this I learned while flying with Dutch pilots across Europe, the Near East, and India to the Far East.

While flying over scorched, monotonous deserts I learned that in 1934 the leaders of Dutch commercial aviation were following developments in America closely. KLM negotiated with TWA to purchase one of its ships. TWA had the Douglas production tied up with priority rights.

The Dutch got their ship. Cyclone powered, it was used by two KLM pilots, Par-mentier and Moll, in the McRobertson Lon-don-to-Australia air derby that involved 12,000 miles of flying. They took second place in the speed race and first place in the handicap division. By the time the race was over KLM had ordered a fleet of Douglas planes, all powered with Wright Cyclones.

The performances of Cyclones in Douglas airplanes used to establish records both in this country and abroad caused the Douglas Company to standardize on the Wright Cyclone engine for airliner installation. Of more than 150 Douglas airliners now in use only one, I believe, is powered with other than the standard engine.

It was the dependability of airplane engines that impressed me most as I flew around the world. I was actually in the air 8 days, 10 hours and 26 minutes, and to a man anxious to get home swiftly, yet safely, the matter of dependability was of utmost importance.

The motors behind which I flew in my early days as a passenger in airplanes would run dependably for only about 250 hours before overhaul. Now they will run at least 400 hours. Dutch engineers, great enthusiasts for American airplane power plants, told me that operation of 700 hours without overhaul is possible.

Several developments, I found as I flew, are responsible for the high efficiency of the mechanical facilities which enabled me to get around the world as fast as I did. They included the dynamic damper, a patented development removing all vibration from the engine. There were also improvements in cylinder head designs and better cooling which marked an important step towards increased power. In this connection we can look forward to further advances in supercharging which will allow greater power, especially at high altitudes. A remarkable development in aviation which was not available until a few years ago is the “gear shift of the air”â€”the controllable pitch propeller operated from the engine oil pressure. And there are the new drives to operate vacuum pumps used to actuate retractable landing gears.

I marveled as I sat in the control cabins of airplanes and as great areas of geography were left behind beneath us I learned of down-draft carburetors, wing de-icers, the complete shielding of the ignition wiring system to prevent interference with radio reception, and many other aviation achievements.

The down-draft carburetor guarded against dirt getting into the engines by taking the carburetor intake air from the top of the motor instead of at the bottom where great clouds of dust were churned up when the plane taxied along the ground.

To attempt to look ahead in the aviation industry literally takes one’s breath away. I thought, as I traveled, that I was flying in the last word in heavier-than-air planes. Now I am learning of engines of 1,000 horsepower. More than 600 Wright engines of 1,000 horsepower have been ordered by the United States Army Air Corps for the new Boeing and Douglas bombers now being built to increase the strength of American military aviation. These new power plants have a fuel consumption which closely approaches that of a Diesel engine. The Dutch have ordered new airliners to be equipped with 1,000 horsepower engines. American Airlines and TWA will use them in this country.

Behind the scenes in all these development are advances in manufacturing. One of these revealed to me was the nitriding of the interior of cylinders in which the pistons move up and down. As the results of nitriding, the hardness of the cylinder interiors has been increased three times. They become so hard they will cut glass. This, of course, means that the cylinder walls have great wear resistance and will last materially longer.

Then there is magnafluxing. Manufacturers, after machining and polishing each steel part for an airplane motorâ€”magnetize it. Then they immerse it in an oil solution which has fine iron particles kept in suspension by an air agitator. If there is a surface crack or defect in the steel, the edges of the break form the two poles of a magnet and attract the iron particles. Hence, the break is shown by a thin black line. Defects which might not be discernible even under a microscope of 10 to 20 diameter enlargement strength are clearly shown up in magnafluxing.