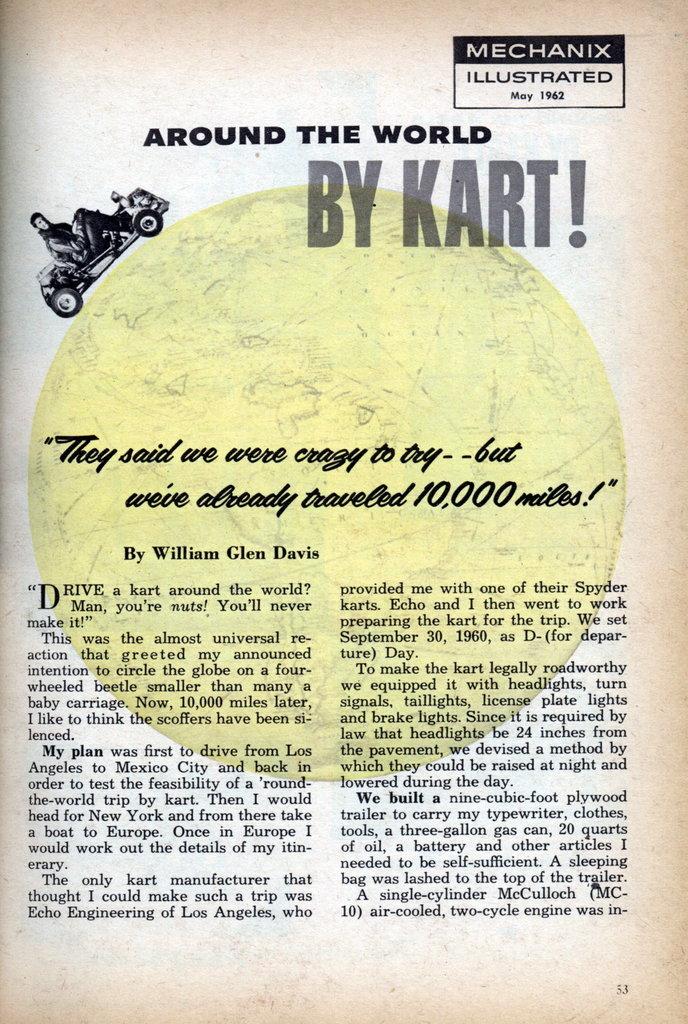 The only kart manufacturer that thought I could make such a trip was Echo Engineering of Los Angeles, who provided me with one of their Spyder karts. Echo and I then went to work preparing the kart for the trip. We set September 30, 1960, as D- (for departure) Day.

To make the kart legally roadworthy we equipped it with headlights, turn signals, taillights, license plate lights and brake lights. Since it is required by law that headlights be 24 inches from the pavement, we devised a method by which they could be raised at night and lowered during the day.

We built a nine-cubic-foot plywood trailer to carry my typewriter, clothes, tools, a three-gallon gas can, 20 quarts of oil, a battery and other articles I needed to be self-sufficient. A sleeping bag was lashed to the top of the trailer.

A single-cylinder McCulloch (MC-10) air-cooled, two-cycle engine was installed on the kart and a spare engine was bolted to the other engine mount “just in case.” An aluminum live axle by Reed Engineering was installed. Reed also supplied the aluminum sprockets and hubs used on the axle. We entrusted the kart’s stopping ability to a Bendix six-inch internal-expanding brake. My tires would be recapped racing slicks. Both kart and trailer were fitted with Hands aluminum wheels. For the drive chain we chose an H.K.K. #35. A centrifugal clutch with an 11-tooth sprocket was used on the engine and a 66-tooth axle sprocket was selected for driving on the open road.

We kept to our schedule and when D-Day arrived I was all set. I bade my friends adieu, gave them a brave smile and a wave of the handâ€”and was off.

Out on the road the McCulloch engine proved fully capable of pulling the kart and trailer with little effort. Using an initial fuel mix of one quart of oil to three gallons of gasoline, the engine operated perfectly (later, when the engine was well broken in, the fuel-mix ratio was changed to 1:4). My cruising speed soon climbed to a swift 50 mph and I averaged about 45 mpg until I reached the higher altitudes of Mexico City where I started recording a really economical 74 mpg.

It took me quite a while to get accustomed to driving hour after hour in so strange a vehicle. The loud exhaust of the engine affected my hearing, and after turning off the engine at the end of the day I felt like a punch-drunk fighter. The rough ride (karts don’t have springs) didn’t help matters either but I realized these were things I would just have to get used toâ€”and after a while I did.

The chief difficulty I encountered driving through Mexico was that of dodging ’round the many cows that wander onto the highways. One day as I was cruising along at my customary 50 mph, I topped a rise in the road and saw a fat, brown cow looming up in front of me. As I steered to the right she sauntered to the right; and when I veered to the left so did she. By that time I had no choice but to careen off the highway and into the gulch. After that I made it a point to slooow down at all curves and on all rises.

While the trip from L.A. to M.C. took me 20 days, ten of these were spent at the beautiful beach resorts of Miramar and Mazatlan. On the return trip I covered the 610 miles from Mexico City to Monterrey in less than a day and a half, sleeping time included. Thereafter I coasted along at a leisurely 250 miles per day.

Arriving in Dallas, Texas, I decidedâ€”for test purposesâ€”to change over to a Power Products AH82 engine (the McCulloch had more than proved itself). The mileage delivered by this engine proved comparable to that of the smaller McCulloch engine but the PP mill gave me a higher cruising speedâ€”60 mph.

I now headed east across the United States. As I crossed into Georgia the weather took on a chill and I donned my jacket; in South Carolina I bought a good pair of fur-lined gloves; by the time I hit North Carolina I had put on my boots and insulated underwear; and as I approached Richmond, Va., I was greeted by one of the worst snow storms the East had experienced in 12 years. This forced me to hole up in a motel for a day until the storm was over. Then, after thawing out my engine, I was on my way again.

The road was relatively dry until I was within 50 miles of Washington, D. C, when ice and snow patches became more frequent. But the biting cold and the fact that I was driving without a windshield caused me more anguish than the icy roads. Yet, I knew it had all been worthwhile when I finally scooted out of the New York side of the Holland Tunnel and into the Big Town.

I immediately set about making plans for my boat trip to Italy. During this time I made the acquaintance of cartoonist Stan Mott. When Stan learned of my plans to tour the world by kart he became as enthusiastic about the idea as I was. And any doubts I might have harbored about the sincerity of his enthusiasm were put to flight when he suggested that we make the trip together.

Stan’s choice of transportation was a Blitz Kart. We built a trailer similar to mine for carrying his art equipment, typewriter, clothes and miscellaneous gear.

Having fitted his Blitz with the fixtures required to make it a law-abiding highway vehicle, we then equipped it with the same model Power Products engine that had proved such a reliable kicker on my kart.

Although the Hands aluminum wheels on my kart showed little wear after my long cross-country run, we decided to try out another type: Go-Power magnesium wheels of a new stamped design. These we installed on both karts. Also, after all that mileage, I thought it a good idea to replace my #35 chain with a new one.

At last the day came when Stan and I stood together at dockside as our sturdy karts and trailers were loaded onto the freighter which would take us to Italy. A few hours later we were leaning on the taffrail watching the Ambrose Lightship fade into the mist behind us.

(Editor’s note: At last report, Davis and Mott had landed in Italy after a brief stopover in Tangier, then headed over the Alps through Switzerland and arrived in Paris. Future jaunts are planned through Eastern Europe and the Soviet Union. Even the Far East is tentatively included in their itinerary. Good luck, fellas!)