Modern Mechanix
Issue: Feb, 1935
Posted in: Aviation, Nautical, Sign of the Times
Tags: Eddie Rickenbacker, travel
1 Comment on Around the World on the New Airways of the Seas (Feb, 1935) 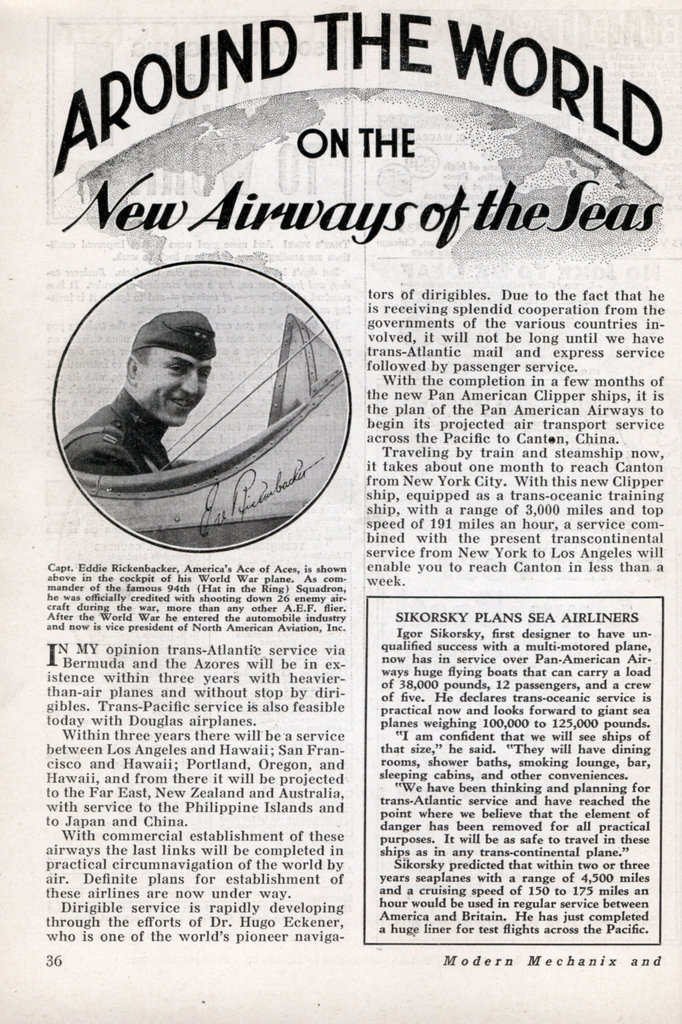 Around the World on the New Airways of the Seas

This noted flier predicts that business men will fly from New York to Canton, China, in a week, a trip that now takes a month. He foresees dirigibles flying around the world for weeks without stopping to land. Read this exclusive, revealing story.

IN MY opinion trans-Atlantic service via Bermuda and the Azores will be in existence within three years with heavier-than-air planes and without stop by dirigibles. Trans-Pacific service is also feasible today with Douglas airplanes.

Within three years there will be a service between Los Angeles and Hawaii; San Francisco and Hawaii; Portland, Oregon, and Hawaii, and from there it will be projected to the Far East, New Zealand and Australia, with service to the Philippine Islands and to Japan and China.

Dirigible service is rapidly developing through the efforts of Dr. Hugo Eckener, who is one of the world’s pioneer navigators of dirigibles. Due to the fact that he is receiving splendid cooperation from the governments of the various countries involved, it will not be long until we have trans-Atlantic mail and express service followed by passenger service.

With the completion in a few months of the new Pan American Clipper ships, it is the plan of the Pan American Airways to begin its projected air transport service across the Pacific to Canton, China.

Traveling by train and steamship now, it takes about one month to reach Canton from New York City. With this new Clipper ship, equipped as a trans-oceanic training ship, with a range of 3,000 miles and top speed of 191 miles an hour, a service combined with the present transcontinental service from New York to Los Angeles will enable you to reach Canton in less than a week.

It will not be long until we will see huge dirigibles carrying upwards of 50 to 75 passengers encircling the globe for a period of possibly a month or longer without landing. Airplanes will approach the great airships and become attached to the dirigible, a device having now been developed for such a purpose. Passengers will then be transferred to the airplane, as well as mail and express, and be ferried to their destinations. At the same time the plane will act as a refueling station for the dirigible.

It is my sincere belief that with the present coast to coast services and the inauguration of trans-oceanic service, this year will go down in aeronautical history as the year when the airplane manufacturers assisted by the air transport operators were successful in overcoming the many difficulties they have been encountering for years.

Records accomplished during the last few months prove the phenomenal progress achieved by American air transport lines in the ten years since their inception. If we could look back some thirty-two years when the Wright Brothers climbed into a contraption which they called an airplane and went aloft, even though it was just for one minute and someone had the foresight to visualize the future of aviation and prophesied that by 1934 it would be an overnight flight to California from New York, or an eight hour hop to Miami, I am sure they would have been pronounced insane, but fortunately for us it is an actuality. Here I would like to mention the flight I recently commanded in one of the Douglas Luxury airliners. It was one of a fleet of fourteen which Eastern Air Lines, Inc., was taking to place on their eight hour service between New York and Miami, as well as their service between Chicago and Miami, and New York and New Orleans.

Having received favorable weather reports, we left Burbank, Calif., after breakfast, at 5:42 a. m. on November 8, with three passengers, a crew of three, and additional gasoline tanks containing 360 gallons.

We climbed to an altitude of approximately 12,000 feet at the rate of 400 feet a minute. Due to encountering crosswinds our speed was slackened and instead of refueling at Chicago, as we were following the Great Northern Circle route, we were forced to land at Kansas City for refueling.

Due to the ability of the TWA personnel at Kansas City to render efficient and quick service, we were only on the ground 12 minutes for refueling with 650 gallons of gasoline and one gallon of oil, as well as changing the crystals in our radio for eastern frequencies.

After leaving Kansas City we climbed to an altitude of approximately 17,000 feet, in other words reaching the sub-stratosphere and with exceptionally good tail winds averaged 256 miles an hour for one hour. We were flying over the clouds from Terre Haute, Ind., until we were over Wilmington, Del. From there on we came down gradually until we landed at Newark Airport at approximately 8:46 p. m., exactly 12 hours, 3 minutes and 50 seconds after leaving Los Angeles, completing the first transcontinental transport trip with only one stop-â€” breakfast in Los Angeles and a late dinner in New York City.

With this new type of Douglas plane, air travel has become a genuine pleasure as at the end of the above trip we all felt fine and ready to turn around and go back. This feature was also proven in the London to Melbourne race as it is reported the pilots in the winning English plane were at the point of exhaustion on their arrival, whereas passengers and crew of the second place Douglas looked fine and quite refreshed.

The above indicates that with the scientific improvement in instruments, radio equipment, radio beacons, and improved landing fields and facilities, there will, in my opinion, be an 8 to 10 hour regular transcontinental service available within the next three or four years, and in addition the planes operating on this service will be equipped as Pullman sleepers.

As further proof of the rapid advancement of commercial aviation toward the goal of around-the-world airlines, let us take a glimpse at what happened in the 11,323 mile MacRobertson raceâ€”the greatest one in the history of aviationâ€”from London to Melbourne, Australia. It is true our British cousins, C. W. A. Scott and C. Black, were the winners and we offer them our heartiest congratulations on their success. However, their plane, a twin-engine De Haviland Comet, was a specially built speed plane.

They made the trip in 70 hours, 54 minutes, 18 seconds elapsed time, averaging 159.1 miles an hour, making six stops enroute, which is in itself a marvelous record.

While it took Parmentier 90 hours, 17 minutes and 30 seconds to reach Melbourne, or approximately 19 hours longer than the winner, he made sixteen stops enroute and flew over a route some 1,000 miles longer than that flown by Scott and Black.

The American team, Roscoe Turner and Clyde Pangborn, flying a Pratt & Whitney Wasp-powered Boeing 247-D transport ship, which is being flown in regular transport service by United Air Lines, Inc., arrived third in the raceâ€”2 hours and 44 minutes after the Dutch ship. They, too, took a much longer route than the winners.

No wonder that the British aviation experts, while thrilled with the success of Scott and Black, were the first to acknowledge that the flights of the two American-built and powered transports were more significant commercially than the flight of the winner.

Hardly had our interest waned over the results of the MacRobertson race when we learned that our good friend, Sir Charles Kingsford-Smith, the first man to fly the Pacific east and west, and one of the pioneer pilots of the world, with his co-pilot and navigator, Captain P. G. Taylor, successfully made a 7,365 mile jaunt from Brisbane, Australia, to Oakland, California.

What kind of a plane was Sir Charles using? Nothing else but an American-made Lockheed Altair model which he called “Lady Southern Cross.”

In the future, I believe we will concede to Sir Charles the credit for proving that Hawaii is the landing field between America and Asia.