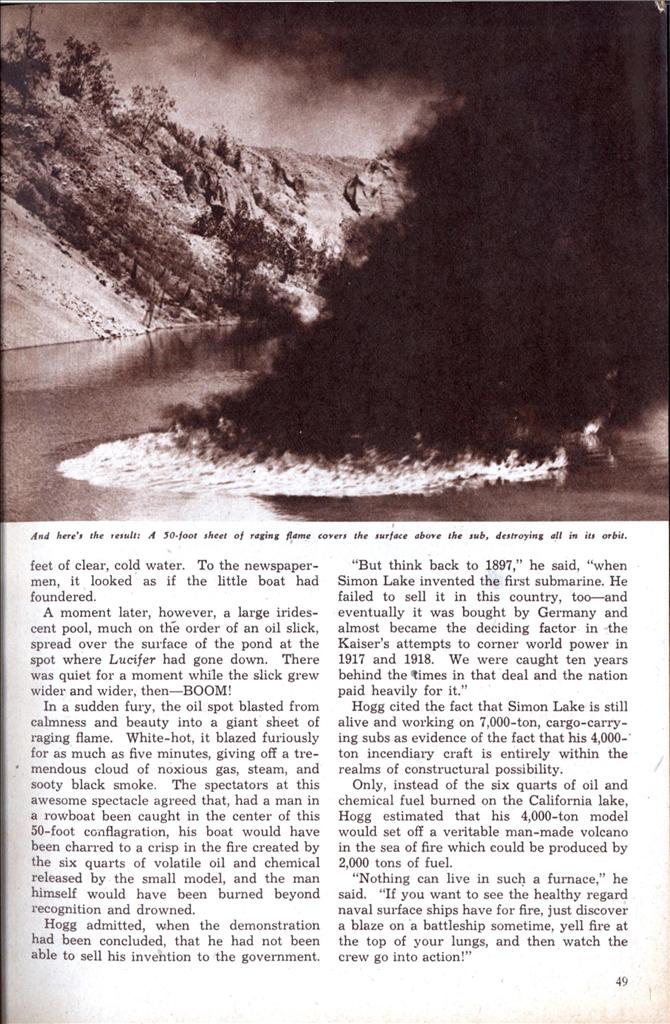 Using a 48-inch working model of an underseas craft, which he described as the forerunner of a fleet of 4,000-ton incendiary subs, Hogg successfully demonstrated that U-boats could be built which would slip sub- merged into enemy harbors, spew a great oil slick to the surface, and a moment later explode the slick into a raging inferno of fire and destruction. According to the inventor, no living thing could tolerate the awful fury of the flame resulting from one charge of this new-type sub.

Hogg tested his model on a small lake, in an abandoned rock quarry, near Azusa, California. Standing waist-deep in the water before an assemblage of newspapermen, Hogg set the clock-motors of his craft—which he calls Lucifer—in motion, pointed it away from the shore, and released it. Immediately Lucifer sped toward the center of the lake and submerged with a running dive into 35 feet of clear, cold water. To the newspapermen, it looked as if the little boat had foundered.

A moment later, however, a large iridescent pool, much on the order of an oil slick, spread over the surface of the pond at the spot where Lucifer had gone down. There was quiet for a moment while the slick grew wider and wider, then—BOOM!

In a sudden fury, the oil spot blasted from calmness and beauty into a giant sheet of raging flame. White-hot, it blazed furiously for as much as five minutes, giving off a tremendous cloud of noxious gas, steam, and sooty black smoke. The spectators at this awesome spectacle agreed that, had a man in a rowboat been caught in the center of this 50-foot conflagration, his boat would have been charred to a crisp in the fire created by the six quarts of volatile oil and chemical released by the small model, and the man himself would have been burned beyond recognition and drowned.

Hogg admitted, when the demonstration had been concluded, that he had not been able to sell his invention to the government.

“But think back to 1897,” he said, “when Simon Lake invented the first submarine. He failed to sell it in this country, too—and eventually it was bought by Germany and almost became the deciding factor in the Kaiser’s attempts to corner world power in 1917 and 1918. We were caught ten years behind the times in that deal and the nation paid heavily for it.”

Hogg cited the fact that Simon Lake is still alive and working on 7,000-ton, cargo-carrying subs as evidence of the fact that his 4,000-‘ ton incendiary craft is entirely within the realms of constructural possibility.

Only, instead of the six quarts of oil and chemical fuel burned on the California lake, Hogg estimated that his 4,000-ton model would set off a veritable man-made volcano in the sea of fire which could be produced by 2,000 tons of fuel.

“Nothing can live in such a furnace,” he said. “If you want to see the healthy regard naval surface ships have for fire, just discover a blaze on a battleship sometime, yell fire at the top of your lungs, and then watch the crew go into action'”

Hogg explained that, in attacking enemy surface craft, his sub would use its periscope only for sighting the enemy. It then would dive to its greatest possible depth and use the radio sonic direction-finder for finding its most favorable position for attack. That position would be under and slightly ahead of the enemy.

The sub then would eject its fuel cargo by injecting water ballast into the tanks. The liquid fuel would go directly to the surface, spread out very quickly over a large area, and would be ignited by chemical detonators sent to the surface with the fuel.

Any ship or ships caught in such a fire would be doomed. In a matter of seconds every painted surface above the water line would be ablaze. Temperatures in every compartment above water would speedily mount beyond human endurance. Explosions and sinking would follow the spread of the fire into fuel bunkers, powder magazines, or munitions handling routes.

When burning on water, petroleum and petroleum products have a tendency to some extent to blank themselves out by the consumption of oxygen and from smothering by their own products of combustion. Hogg claims to have overcome this objection, however, by using a fuel which has recently been perfected by chemical engineers and which generates oxygen as it burns. This, he says gives the fuel a tremendously increased speed of combustion, as well as an enormous increase in heat.

“It also is possible,” Hogg states, “to alter this fuel mixture to meet the specific conditions of jobs the incendiary sub would be called upon to do. For example, the destruction of tidal seaports.”

Hogg visualizes his craft approaching a harbor entrance, outside the mine fields and anti-submarine barriers, and without ever showing a periscope. Suddenly it releases its blazing cargo on an inflowing tide.

The result, he insists, would be a holocaust.

The cheap, low-grade fuel oil suitable for this type of attack Hogg claims would speedily ignite the first-class fire traps which make up most seaports. Flimsy, creosoted pilings and docks would burst into a fire which would be self-perpetuating to the limits of combustible material around it.

Ordinary water-and-hose fire fighting methods would be powerless to arrest it, as proven by the oil bombs and thermites dropped by the Nazis on London.

Hogg pointed out that the British navy, some months ago, turned back an attempted Nazi invasion by attacking the German invasion barges with burning oil dumped around them on the North Sea by cruisers, corvettes and destroyers. England, he insisted, hadn’t told how many barges they burned or how many Nazis they’d roasted alive in that sortie. But, according to German reports of the battle, most of these who got back to Germany were wrapped in oiled sheets and allowed to die under pain-killing narcotics.

Hogg said the British had borrowed the idea, however, from the ancient Greeks, who’d used it against the Carthagenians. The Athenians dumped crude oil on the water, set it ablaze, and burned the whole Carthagenian fleet to the bottom of the Mediterranean. He emphasized the fact that, with modern submarines as the flame-producers, an even more effective naval victory could be effected.

The inventor minimized the value of his discovery to any other nation than the United States, however. Hitler, he pointed out, has little oil to spare for purposes of incendiary warfare, whereas America has 62.8 percent of the world’s available supply.

“If we do not take advantage of this superiority,” he warned, “by developing the proper weapons, it will be just another example of democracy doing too little, too late!”