Aeronutronic, now there’s a word you don’t hear every day. 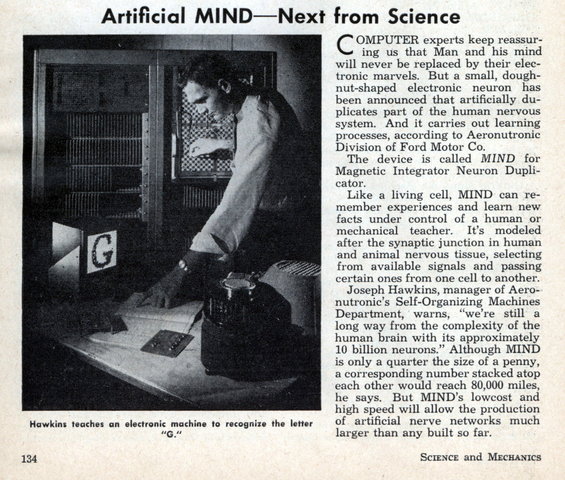 COMPUTER experts keep reassuring us that Man and his mind will never be replaced by their electronic marvels. But a small, doughnut-shaped electronic neuron has been announced that artificially duplicates part of the human nervous system. And it carries out learning processes, according to Aeronutronic Division of Ford Motor Co.

The device is called MIND for Magnetic Integrator Neuron Duplicator.

Like a living cell, MIND can remember experiences and learn new facts under control of a human or mechanical teacher. It’s modeled after the synaptic junction in human and animal nervous tissue, selecting from available signals and passing certain ones from one cell to another.

Joseph Hawkins, manager of Aero-nutronic’s Self-Organizing Machines Department, warns, “we’re still a long way from the complexity of the human brain with its approximately 10 billion neurons.” Although MIND is only a quarter the size of a penny, a corresponding number stacked atop each other would reach 80,000 miles, he says. But MIND’s lowcost and high speed will allow the production of artificial nerve networks much larger than any built so far.