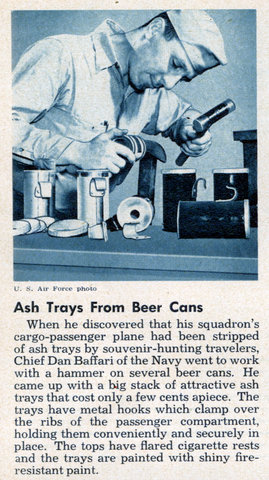 Ash Trays From Beer Cans
When he discovered that his squadron’s cargo-passenger plane had been stripped of ash trays by souvenir-hunting travelers, Chief Dan Baffari of the Navy went to work with a hammer on several beer cans. He came up with a big stack of attractive ash trays that cost only a few cents apiece. The trays have metal hooks which clamp over the ribs of the passenger compartment, holding them conveniently and securely in place. The tops have flared cigarette rests and the trays are painted with shiny fire-resistant paint.