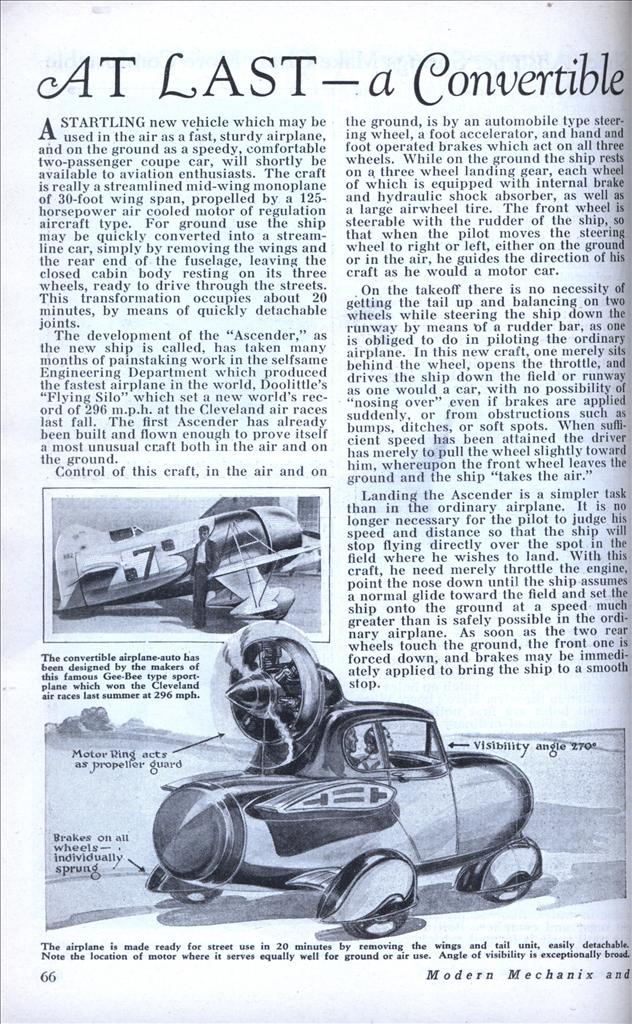 AT LAST â€” a Convertible AUTO-PLANE

by THEODORE A. HODGDON

A STARTLING new vehicle which may be used in the air as a fast, sturdy airplane, and on the ground as a speedy, comfortable two-passenger coupe car, will shortly be available to aviation enthusiasts. The craft is really a streamlined mid-wing monoplane of 30-foot wing span, propelled by a 125-horsepower air cooled motor of regulation aircraft type. For ground use the ship may be quickly converted into a streamline car, simply by removing the wings and the rear end of the fuselage, leaving the closed cabin body resting on its three wheels, ready to drive through the streets. This transformation occupies about 20 minutes, by means of quickly detachable joints.

The development of the “Ascender,” as the new ship is called, has taken many months of painstaking work in the selfsame Engineering Department which produced the fastest airplane in the world, Doolittle’s “Flying Silo” which set a new world’s record of 290 m.p.h. at the Cleveland air races last fall. The first Ascender has already been built and flown enough to prove itself a most unusual craft both in the air and on the ground.

Control of this craft, in the air and on the ground, is by an automobile type steering wheel, a foot accelerator, and hand and foot operated brakes which act on all three wheels. While on the ground the ship rests on a three wheel landing gear, each wheel of which is equipped with internal brake and hydraulic shock absorber, as well as a large airwheel tire. The front wheel is steerable with the rudder of the ship, so that when the pilot moves the steering wheel to right or left, either on the ground or in the air, he guides the direction of his craft as he would a motor car.

On the takeoff there is no necessity of getting the tail up and balancing on two wheels while steering the ship down the runway by means of a rudder bar, as one is obliged* to do in piloting the ordinary airplane. In this new craft, one merely sits behind the wheel, opens the throttle, and drives the ship down the field or runway as one would a car, with no possibility of “nosing over” even if brakes are applied suddenly, or from obstructions such as bumps, ditches, or soft spots. When sufficient speed has been attained the driver has merely to pull the wheel slightly toward him, whereupon the front wheel leaves the ground and the ship “takes the air.”

Landing the Ascender is a simpler task than in the ordinary airplane. It is no longer necessary for the pilot to judge his speed and distance so that the ship will stop flying directly over the spot in the field where he wishes to land. With this craft, he need merely throttle the engine, point the nose down until the ship assumes a normal glide toward the field and set the ship onto the ground at a speed much greater than is safely possible in the ordinary airplane. As soon as the two rear wheels touch the ground, the front one is forced down, and brakes may be immediately applied to bring the ship to a smooth i stop.