Really interesting piece about reporters covering the Italian invasion of Ethiopia in 1936. It’s interesting to contrast with the current reports coming out of Iraq. I wonder if they still suffer from mutton fatigue. 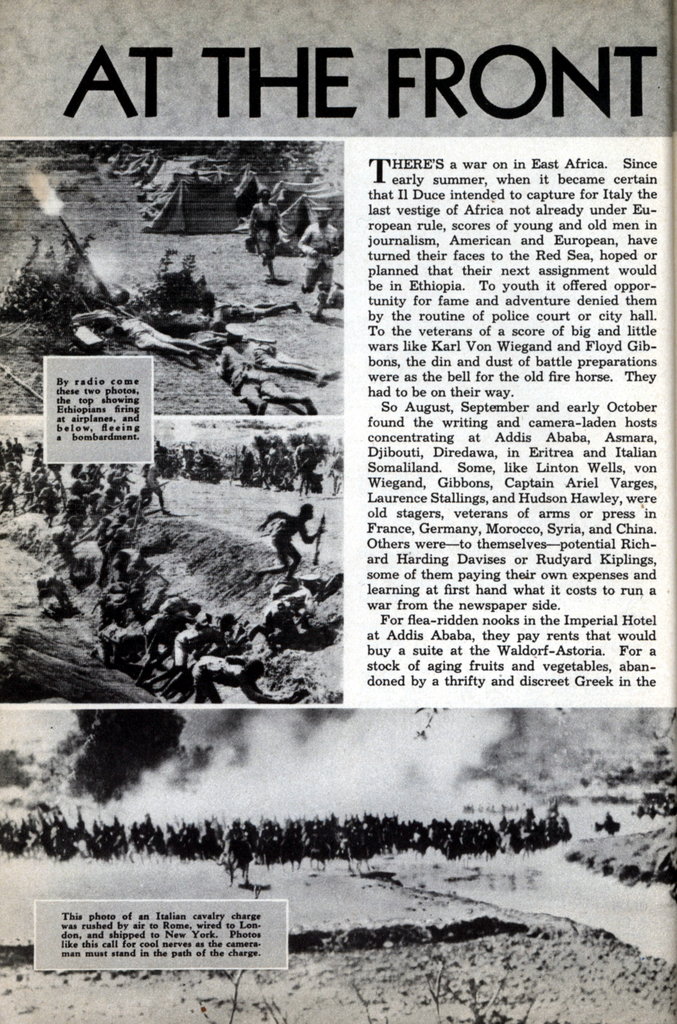 AT THE FRONT IN ETHIOPIA

THERE’S a war on in East Africa. Since early summer, when it became certain that II Duce intended to capture for Italy the last vestige of Africa not already under European rule, scores of young and old men in journalism, American and European, have turned their faces to the Red Sea, hoped or planned that their next assignment would be in Ethiopia. To youth it offered opportunity for fame and adventure denied them by the routine of police court or city hall. To the veterans of a score of big and little wars like Karl Von Wiegand and Floyd Gibbons, the din and dust of battle preparations were as the bell for the old fire horse. They had to be on their way.

So August, September and early October found the writing and camera-laden hosts concentrating at Addis Ababa, Asmara, Djibouti, Diredawa, in Eritrea and Italian Somaliland. Some, like Linton Wells, von Wiegand, Gibbons, Captain Ariel Varges, Laurence Stallings, and Hudson Hawley, were old stagers, veterans of arms or press in France, Germany, Morocco, Syria, and China. Others wereâ€”to themselvesâ€”potential Richard Harding Davises or Rudyard Kiplings, some of them paying their own expenses and learning at first hand what it costs to run a war from the newspaper side.

For flea-ridden nooks in the Imperial Hotel at Addis Ababa, they pay rents that would buy a suite at the Waldorf-Astoria. For a stock of aging fruits and vegetables, abandoned by a thrifty and discreet Greek in the face of Italy’s advance, they paid more than the value of the store. And for radio and cable messages to the newspapers at home, they paid 32 cents a word and raged at an Ethiopian censorship which limited their daily file to 100 words from Addis Ababa after the first wild week of assorted rumors. This war, to date, has but slightly resembled in conveniences for war correspondents the commodious struggles of the Western Front, or the chummy scraps around Shanghai, where the writers visited back and forth between the hostile armies. For most of those in Ethiopia, front line reporting has so far been by remote control and under a censorship that has learned all the tricks of its trade since 1918.

The first advance of the Italian armies against Aduwa from Eritrea was announced to the United States by Webb Miller of the United Press, who arrived in Asmara by airplane from Khartum. His dispatch was filed from Asmara, field headquarters of the Italians, censored there, flashed to Rome, again censored, relayed to London and then to New York, where it arrived at 4:27 a.m., October 3.

Floyd Gibbons flew from Rome to Eritrea and gave the Hearst newspaper readers an overhead view of the bloodless advance that avenged Italy’s defeat of 40 years ago. These two, and later a few others representing the Associated Press and some metropolitan newspapers, were the only correspondents on the unexpected scene of Italy’s first move. The corps of 100 stationed at Addis Ababa had nothing but the brief and practically newsless Ethiopian communiques for the first ten days.

The startling headlines of the opening days of the war arose from the scarcity of fact and abundance of rumor in the Ethiopian capital. Correspondents wanted to make some showing at home for the tremendous outlay their presence requiredâ€”probably about $500 per week per manâ€”and sought to develop exclusive news sources by bribing government servants for news tips. It was soon a pronounced seller’s market. The price of tips went skyward and some enterprising Ethiopians, it is said, invented news on demand and at the best price obtainable. The Ethiopian “press bureau,” headed by a bright young soldier with a knowledge of French and English, limited its output to official communiques. Short announcements were posted on the official bulletin board, round which 100 correspondents thronged, usually turning away disappointed. Long communiques were read in French to the assembled correspondents, who squeezed them dry for news droplets, translated them into every language of the civilized world, and trusted to Heaven that they would get on the air during the few daily hours of the Addis Ababa radio station’s operation. The operators know only their own Amharic language. One to four hours was good transmission time for press messages from Addis Ababa to London. To send by land line from Addis Ababa to the French port of Djibouti, thence by wireless or cable to London or Paris, took from 20 to 40 hours and cost 30 per cent more than the radio. The latter, a government monopoly, is said to be netting Haile Selassie’s domain more than $100,000 a month.

None of the newspaper group at the capital had been permitted to go to the actual front as this is written. The stated reason is that Ethiopians are likely to regard all white men as Italiansâ€”a situation not conducive to long life or continued happiness for the white men. With home offices demanding hourly fresh news of the clash of armsâ€”and these incoming messages consuming from 24 to 48 hours in transitâ€”the Addis Ababa corps made frantic arrangements for relays of couriers and mule teams between the capital and Khartum and Djibouti. At Khartum, connection can be had with the regular Imperial Airways service. Several correspondents made early contacts with the headquarters of the Ethiopian forces on the southern front, defending the railway and the river approaches to the capital against the Italian advance from Somaliland, and managed to get long and circumstantial stories of the Ethiopian dispositions transmitted via the government shortwave set. Naturally, these accounts did not minimize either the dangers confronting the defenders nor the courage with which they were being met.

Improvement of the communication bottleneck is hoped for when the American naval experts set up a portable short wave station which is expected to reach the United States, either direct or by relay through American naval vessels. The doubtful element in this is whether Haile Selassie will permit any competition with his profitable monopoly.

There is little likelihood that any correspondents will be permitted to travel with advance or outpost troops, as Floyd Gibbons did when he lost his eye near Chauteau Thierry or Edward Marshall when he dictated his story over a bullet-shattered leg in Cuba. The present generation of front line writers will be chaperoned at all times by the staffs of both armies, and taken on generous tours of inspection in the later stages of a successful action. Apparently they have little to fear from the Ethiopian air force, and the Italian aviators have so far confined their attentions to mud and straw villages far from the correspondents’ locale.

Casualties due to bombing by planes have been greatly exaggerated, there is little doubt. No German raid over London or Paris ever killed a fraction of the civilians claimed by the Ethiopians to have been slaughtered in their hamlets by the Italian planes, and most of these stories can be credited to censorship’s big brotherâ€”propaganda. But, in the lack of confirmatory data, the news has to be transmitted or the correspondent risks being scooped on a major story.

Fever is More Deadly than Bullets

If artillery, aviation and infantry fire promise to hold little peril for the newspaper men, the country itself has plenty of compensatory dangers. A Chicago Tribune correspondent, Wilfred Courtenay Barber, the first to reach Ethiopia, died of malaria October 6. He had penetrated the Ogaden desert in June to tell the story of how Ethiopia would defend its most dangerous frontier, and predicted on his return that the fever would be deadly to the whites who fought across that region. He was the first to fulfill his own prediction. Overcrowding in stuffy, dirty, verminous hotelsâ€” a far cry from the chateaux of the He de France and the Cote d’Orâ€”is certain to take its toll in sickness and death toll. Adventurous souls who go forth on their own to get the story behind the terse unrevealing lines of the communique will probably be well treated by the Ethiopian chiefs, but their journeys will be beset by guerilla tribesmen and the insects, reptiles, and large fauna of the Abyssian wilds. And around them at all times will be the fevers.

Pictures are already a larger part of the news of this war than ever before. To date, most of the shots published in the United States have come from the Italian military photographersâ€”flown to Rome, and thence transmitted by radio to London and the United States. The trans-oceanic radio transmission of pictures has not yet approached the perfection attained-by the Wirephoto and other processes for telegraphic transmission in this country, but the original prints which followed the radio pictures within 10 days proved the latter to be remarkably faithful reproductions.

The news reel crews of all the great American and European services have had their equipment cleared for action ever since hostilities threatened. Their assignment will be difficult and perilous, for your present-day audience wants his battle pictures hot with action. He wants to hear the whee-e-e of bullets and to see the impact of a 250-pound bomb, and there is little doubt that he will get his wish. It is a new trick in war to have generator trucks loaded with sound apparatus rolling along at the heels of an advance battalion, but that the news reel men expect to do just that is evidenced by the story that they have painted the roofs of their trucks with huge American flags, hoping that the bombers and ground-strafers of Il Duce will give them a personally wide berth.

They will spend hundreds of thousands of dollars for hardy native runners, for camel and mule relays, for cable and radio tollsâ€”a minimum of 32 cents a word from Addis Abba to New York. They will buy clothing suitable for life on a plateau two miles above sea level and also for work in miasmic lowlands sweltering under an Equatorial sun. They will hire white and native assistants. They will charter airplanes at exorbitant rates to fly a single reel of pictures to a rail or plane station.

There won’t be much glory for all of their achievements, for today’s scoop is soon forgotten, especially if tomorrow brings victory for a rival. But there isn’t a man on the story who would willingly accept a transfer to Paris, London, or New York at this stage of the game. Hot and dirty, harried by employees and hamstrung by censors, daily tortured by sun and at night by insects, tired to distraction of the eternal diet of mutton, crazy for a drinkable cup of coffeeâ€”they’ll stick with their great adventure and do a job of it. Wars and journalists are like that.