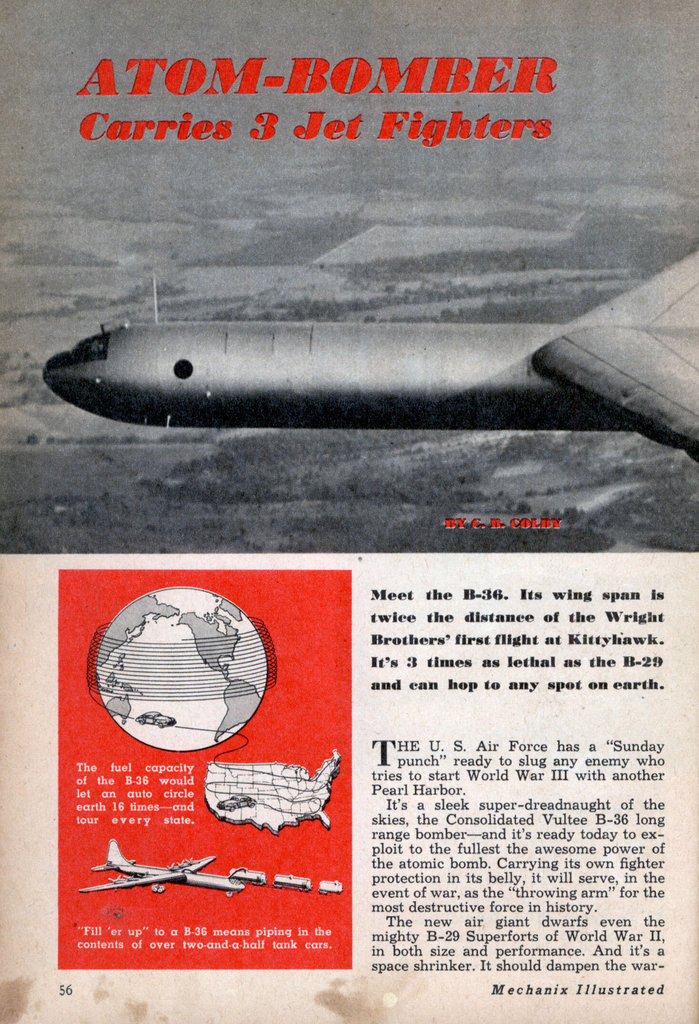 Meet the B-36. Its wing span is twice the distance of the Wright Brothers’ first flight at Kittyhawk. It’s 3 times as lethal as the B-29 and can hop to any spot on earth.

THE U. S. Air Force has a “Sunday punch” ready to slug any enemy who tries to start World War III with another Pearl Harbor.

It’s a sleek super-dreadnaught of the skies, the Consolidated Vultee B-36 long range bomberâ€”and it’s ready today to exploit to the fullest the awesome power of the atomic bomb. Carrying its own fighter protection in its belly, it will serve, in the event of war, as the “throwing arm” for the most destructive force in history.

The new air giant dwarfs even the mighty B-29 Superforts of World War II, in both size and performance. And it’s a space shrinker. It should dampen the warring ambitions of aggressive nations anywhere in the world.

Brigadier-General Roger Ramey, commanding officer of the Eighth Air Force, soon to become the most powerful air unit in the world through acquisition of a fleet of B-36’s, says this about their performance:

“From the North American continent, they can strike anywhere in the world where aggression against us could start.

The bomber is so designed that “there is nowhere in the world that can’t be bombed” from North America, according to General Ramey, “when combat operations are considered in the light of possible shuttle bombing.”

The B-36 has a four-section bomb-bay whose total space equals that of four railroad freight cars. It can fly 8,000 miles at nearly 400 mph with a bomb load of five tons â€”and fly home. For closer targets it carries 36 tons of blockbusters.

In terms of a fighting army, the huge craft can carry 400 fully armed men to any battlefield on earth.

The extent to which the new atom-bomber outclasses even its vaunted predecessor, the B-29, is most obvious in a physical comparison. Its fuselage, for example, is two-thirds longer than that of the World War II Superfortâ€”163 feet compared to 99 feet.

The giant wing of the B-36, swept back along the leading edge, covers an area of almost 5,000 square feet. Six pusher-type Pratt and Whitney engines, mounted along the trailing edge, develop a total of 18,000 hp.

The B-36 is equipped also with the largest propellers ever installed on an aircraftâ€”19 feet from tip to tip. Thermal anti-icing is provided for cold weather, high-altitude flying. A reversible pitch mechanism makes short landing runs possible despite the bomber’s massive size. A simple control throws the propeller blades in “reverse” and they act as “air brakes.” It is uncanny to see this monster plane land, come to a quick, smooth stop, then back up the runway to a taxi strip.

The takeoff, too, is something to watch. Starting down the runway smoothly and easily, the mighty bomber takes on a slow-motion-movie appearance as it finally becomes airborne. Its takeoff run is 5,000 feet over a 50-foot obstacle.

The nose of the B-36, which normally carries a crew of 12 with a four-man relief unit, is equal in size to ten average living rooms.

Fighter protection for the AAF’s new atom bomber, a big target for advanced attacking techniques such as proximity fuses and guided missiles, is not the problem it seems. Its service ceiling of 40,000 feet places it beyond the range of anti-aircraft fire or efficient fighter attack. Still the atom bomber must be prepared to defend itself. For this, its engineers have several answers.

In addition to eight gun turrets, each equipped with two 20-mm cannon electronically sighted and fired at an enemy attacker, the B-36 has another advantage. To attack a bomber successfully, a fighter must be capable of a speed at least 25 per cent greater than that of its quarry. The atom bomber’s speed of nearly 400 mph, then, runs an attacking fighter squarely into the compressibility problem. The fighter has to reach at least 500 mph if it is to fly rings around its target.

Now a fighter’s maneuverability decreases as its speed increases, to say nothing of the added physical burden on the pilot under such circumstances. These two factors help protect the B-36, since an attacking plane is yet to be devised that can engage in aerial combat at such a speed.

Jet fighters have exceeded a speed of 500 mph in level flight, but there is no indication that maneuverability in combat, even in these planes, can approach the high level of efficiency required at such speeds.

The B-36’s ace-in-the-hole, however, is a startling innovation in military air scienceâ€” the “parasite fighter.” Each of the mighty bombers will be capable of carrying in its bomb-bay section three tiny jet-powered fighters, to be released against the enemy if “things get hot.” These bantam fighters, XP-85’s built by the McDonnell Aircraft Corporation of St. Louis, are vest pocket versions of the same company’s famous jet-propelled Banshee Navy fighters now in production.

Although the “parasite fighter” will have a comparatively limited range, it will have the advantage of going into combat with a full fuel tank as the B-36 disgorges it in flight.

With all this multiple protection, the massiveness of the B-36, ostensibly a handicap since it offers a large target area, will in no way impair its efficiency as a fighting machine.

Its very existence, in fact, may prove a psychological deterrent to war. Coupled with the United States’ possession of the atomic bomb, the AAF’s new power of instant and devastating atomic retaliation should make a potential enemy think twice before he starts throwing his weight around.