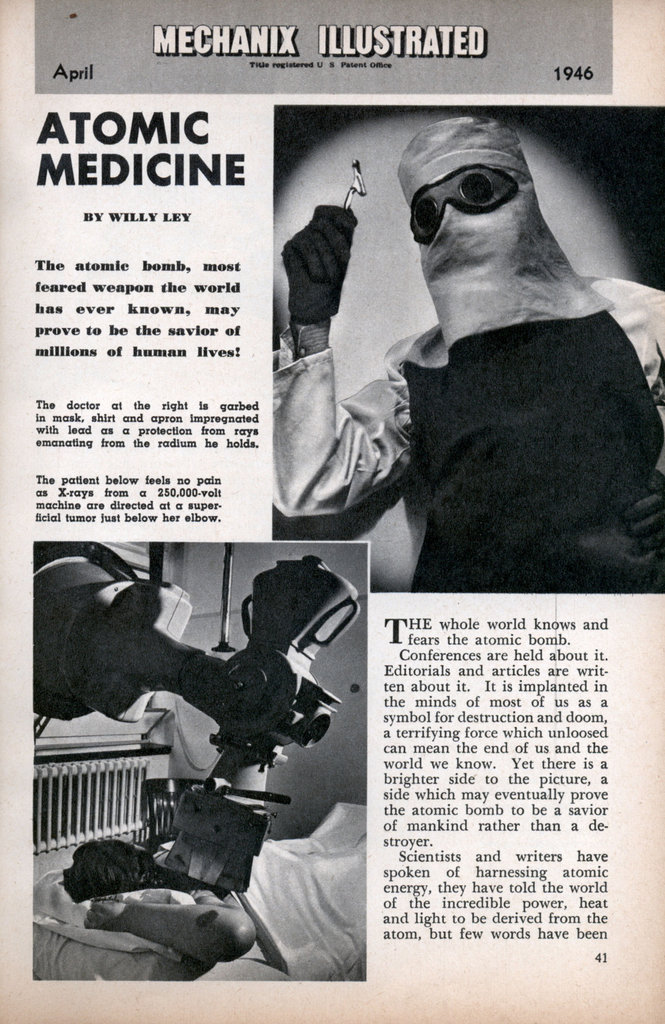 Scientists and writers have spoken of harnessing atomic energy, they have told the world of the incredible power, heat and light to be derived from the atom, but few words have been spoken on its relation to the one science that will perhaps benefit most greatly from the discovery that has become a symbol of doom to so many. That is the science of medicine.

The enrichment of medical knowledge will be brought about by the fact that atomic physics deals with a kind of matter the very existence of which was unknown fifty years ago.

The first class of matter is what may be called “ordinary” matter: hydrogen and helium, carbon and sulphur, silver and mercury, gold and platinum. All these “ordinary” elements are alike in being stable. These stable elements formed such a vast majority in Nature that it was long taken for granted that an element had to be stable in order to be an element.

The medical advance which is possible here hinges on two facts. One is that, aside from the very heavy elements of radium, uranium and a few others, the radio-active isotopes do not stay radio-active. They are, essentially, unbalanced atoms which try to regain their balance by giving off radiations of various kinds, or even by throwing out tiny sub-atomic particles. That way they gradually acquire stability. How long this will take is a question of the isotope involved. Some of them change into stable elements within seconds, some need minutes, some an hour or two, while some may need months.

That they do not stay radio-active is one of the important facts which bears on medical research. The other is that any element, in theory, has one or several radio-active isotopes so that artificial radio-activity of any intensity and duration is theoretically available. There can be no doubt that, in time, nuclear physicists will be able to manufacture all these radio-active unstable isotopes. A few of them are produced right now in the course of those nuclear reactions which lead to the manufacture of the power element in the bomb; they are just byproducts of other nuclear reactions.

But once there exists a demand for radio-active isotopes of common elements the atomic powerplants of various types will see to it that they are produced.

But why should doctors want them? The answer to that question is furnished by the ways in which the unstable atoms which have been created adjust themselves in order to become stable. They do so by giving off radiations, all kinds of radiations, but mostly of the order of penetrating X-rays. You know that X-rays have medical value, not just for looking through a broken leg in order to see how the bone broke, and not just for looking at the root of a tooth in order to see whether it is infected or not, but for treatment directly.

There are many diseases where X-rays have healing power. Some of the simplest but also most difficult to cure are a group of skin infections, caused by bacteria which have somehow succeeded in lodging themselves in the skin and the hair roots. The most important medical application consists in cancer treatments, the principle being that the cancer cells do not resist ray bombardment as well as the healthy body cells. For the treatment of cancer radium has been found better than X-rays from a machine and the treatment consisted of inserting a capsule containing a tiny quantity of radium salts.

While these methods work they are not without drawbacks. It is of utmost importance, for example, to remove the radium-salt capsule after a certain number of hours, otherwise the patient might be seriously harmed or even killed by the cure, because the radium stays radio-active. If the physician had an artificial radio-active isotope at his disposal an isotope, for example, which goes “dead” after eight hours, he would not need to remove the capsule. It could be designed in such a way that it would gradually dissolve in the body, but the curative effect would be the same.

Similarly, in the case of such skin infections, which yield to X-ray treatment, an ointment could be concocted. The poor owner of such an infection may need up to twenty X-ray treatments. Each takes somewhat less than two minutes, but each involves a trip to the doctor’s office or the hospital. If you could make an ointment in which some of the carbon atoms are of the radio-active variety which changes to normal within two weeks (there is such a carbon isotope, and it behaves chemically just like the stable variety) that ointment could take the place of X-ray treatment.

Another example of possible atomic surgery is that of an overly active thyroid gland. We know that virtually all of the iodine which is absorbed by a body ends up in the thyroid. If you fed radio-active iodine in any suitable chemical compound to a man the radio-active iodine, concentrated by the body in the thyroid, would gradually destroy it. In the case of an overactive thyroid that is just what is wanted, provided the gradual destruction can be stopped at the proper point.

If iodine atoms, once made to be radio-active, were to stay that way, the whole scheme would not work; but it can work because the artificially radio-active iodine atoms will wear out.

Similarly it would be possible to produce sterilizing powders, powders which to bacteria are as terrible, and for the same reason, as a rain of atomic bombs would be to us. Body tissue would be attacked by such radio-active sterilizing powders too, if it were active long enough, and the problem would be to find an isotope with just the proper length of radioactivity, long enough to kill bacteria, but too short to kill off an appreciable number of body cells.

A sterilizing powder of high intensity and long activity, or else a chemical compound (with radio-active atoms in its make-up) which is soluble in water, could replace alcohol and similar liquids for the purpose of sterilizing surgical instruments. The instruments themselves would not need to have direct contact with the powder or solution, since that powder acts by emanating rays, so that there would be no danger of contaminating the instruments with radio-active matter. Similarly it would probably be possible to force the air which goes into operating rooms through a radio-active sterilizing system.

Nuclear physics can create entirely new weapons for the fight against disease, sterilizing agents of intense power, radiation carriers for local use and many others. And all of them will be safe to use, because they will all be based on substances which are radio-active for only a limited and definitely known length of time.