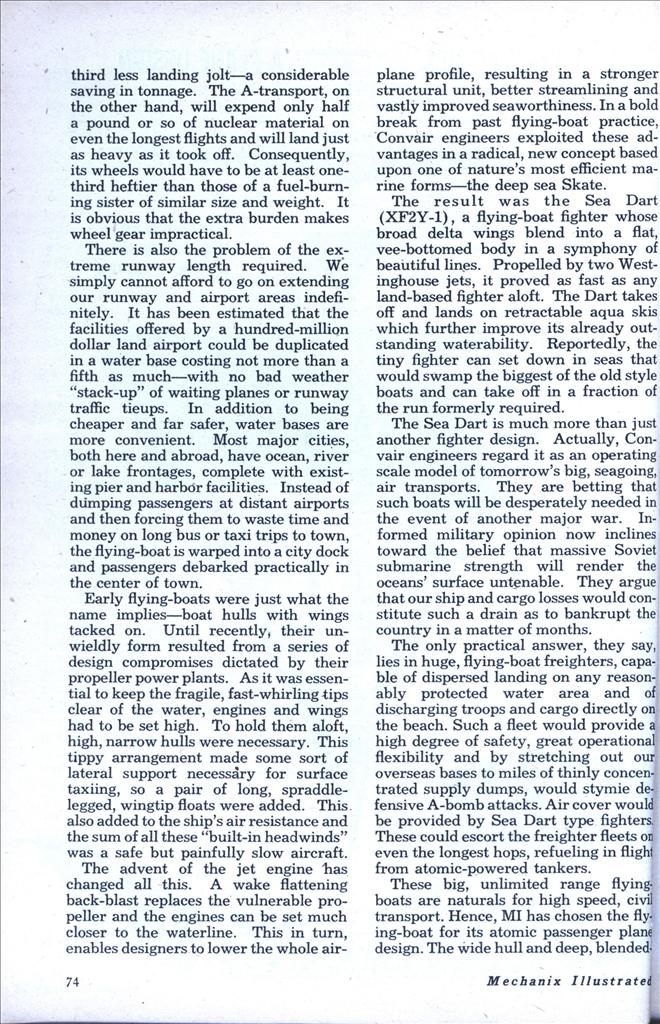 While this constructive harnessing of the fission process may seem new to an uninformed public, it is pretty much “old hat” to the physicists and engineers on the inside. For several years now, pilot A-power plants have been operating here and abroad. A marine adaptation, employing the “slow fission process,” is successfully propelling the submarine Nautilus, and a “fast fission” version is being installed on the newer Sea Wolf. In the latter type, neutrons travel more than 10,000 miles per second to split the nuclear fuel and release its energy. It has the advantage of being small and concentrated, and suffers little neutron loss.

It is easy to see why atomic prospects have kindled the interest of power companies, large industries and equipment manufacturers. When the Pentagon recently asked for bids on an order of standardized package reactors, 100 eager companies responded and the Army is satisfied that some 30 of them have the necessary plant and know-how to be considered seriously. These outfits are well aware of the difficulties involved. The atomic field is still very much fouled up in red tape and military secrecy, so company security will be a formidable item. The handling of “hot” materials will call for expensive precautions to protect workers and dispose of radioactive wastes. Insurance is another major headacheâ€”underwriters are still dubiously studying the problems of employee health and accident coverage. Despite all this, the companies realize that we are now in the atom age up to our hips and like it or not, their future is tied up in the atomic business.

The success of the submarine Nautilus and the navy’s plans for atomic airplane carriers, etc., has sparked the imagination of the transportation industry. Steamship operators are toying with the idea of fission-propelled passenger liners and freighters. Atomic locomotives are on the drawing boards and even such * unlikely notions as A-engines for trucks and cars have been seriously discussed. In most of these cases, the weight problem is not too critical. In the field of aviation, however, shield tonnage has been a grade-A headache. Early types of reactors were enclosed in a shell of solid lead or concrete to protect their operators from deadly radiation. This meant that only an elephantine aircraft could carry it aloft and even then its flight performance would be decidedly hampered.

Then the endless, painstaking work of the researchers suddenly burst into bloom. Within the past year, engineer-scientists have evolved shield designs which whittle down the weight to managable proportions. The new, lighter shields differ from yesterday’s monolithic types by being a composite of various materials, each selected for its efficiency in screening an individual fraction of atomic radiation. These “plies” include comparatively thin, four-inch layers of lead, hydrogen-containing materials, etc., etc. Their exact composition and design is, of course, one of our most precious military secrets, but the shield’s successful development is said to more than meet the target specification at which the researchers were’ shootingâ€”a shielded reactor weighing no more than today’s transport fuel loads. These represent about one-third of the average plane’s gross take-off-weight for craft with reciprocating engines and around 45 per cent for jet jobs. This generally accepted fact inclines A-plane designers to favor the flying-boat type rather than a landplane model. There are several good reasons for this. First of all, we have the little matter of landing wheels, now already nudging the economic weight limit. The boat hull, while structurally heavier than the landplane fuselage, is still a lot lighter, than the fuselage-plus-wheels. Also, the landplane normally ends its trip with its fuel tanks nearly empty. Its gear is therefore designed to take around a third less landing joltâ€”a considerable saving in tonnage. The A-transport, on the other hand, will expend only half a pound or so of nuclear material on even the longest flights and will land just as heavy as it took off. Consequently, its wheels would have to be at least one-third heftier than those of a fuel-burning sister of similar size and weight. It is obvious that the extra burden makes wheel gear impractical.

There is also the problem of the extreme runway length required. We simply cannot afford to go on extending our runway and airport areas indefinitely. It has been estimated that the facilities offered by a hundred-million dollar land airport could be duplicated in a water base costing not more than a fifth as muchâ€”with no bad weather “stack-up” of waiting planes or runway traffic tieups. In addition to being cheaper and far safer, water bases are more convenient. Most major cities, both here and abroad, have ocean, river or lake frontages, complete with existing pier and harbor facilities. Instead of dumping passengers at distant airports and then forcing them to waste time and money on long bus or taxi trips to town, the flying-boat is warped into a city dock and passengers debarked practically in the center of town.

Early flying-boats were just what the name impliesâ€”boat hulls with wings tacked on. Until recently, their unwieldly form resulted from a series of design compromises dictated by their propeller power plants. As it was essential to keep the fragile, fast-whirling tips clear of the water, engines and wings had to be set high. To hold them aloft, high, narrow hulls were necessary. This tippy arrangement made some sort of lateral support necessary for surface taxiing, so a pair of long, spraddle-legged, wingtip floats were added. This, also added to the ship’s air resistance and the sum of all these “built-in headwinds” was a safe but painfully slow aircraft.

The advent of the jet engine has changed all this. A wake flattening back-blast replaces the vulnerable propeller and the engines can be set much closer to the waterline. This in turn, enables designers to lower the whole air- plane profile, resulting in a stronger structural unit, better streamlining and vastly improved seaworthiness. In a bold break from past flying-boat practice, Convair engineers exploited these advantages in a radical, new concept based upon one of nature’s most efficient marine formsâ€”the deep sea Skate.

The result was the Sea Dart (XF2Y-1), a flying-boat fighter whose broad delta wings blend into a flat, vee-bottomed body in a symphony of beautiful lines. Propelled by two Westinghouse jets, it proved as fast as any land-based fighter aloft. The Dart takes off and lands on retractable aqua skis which further improve its already outstanding waterability. Reportedly, the tiny fighter can set down in seas that would swamp the biggest of the old style boats and can take off in a fraction of the run formerly required.

The Sea Dart is much more than just another fighter design. Actually, Convair engineers regard it as an operating scale model of tomorrow’s big, seagoing, air transports. They are betting that such boats will be desperately needed in the event of another major war. Informed military opinion now inclines toward the belief that massive Soviet submarine strength will render the oceans’ surface untenable. They argue that our ship and cargo losses would constitute such a drain as to bankrupt the country in a matter of months. I The only practical answer, they say, lies in huge, flying-boat freighters, capable of dispersed landing on any reasonably protected water area and of discharging troops and cargo directly on the beach. Such a fleet would provide a high degree of safety, great operational flexibility and by stretching out our overseas bases to miles of thinly concentrated supply dumps, would stymie defensive A-bomb attacks. Air cover would be provided by Sea Dart type fighters. These could escort the freighter fleets on even the longest hops, refueling in flight from atomic-powered tankers.

These big, unlimited range flying-boats are naturals for high speed, civil transport. Hence, MI has chosen the flying-boat for its atomic passenger plane design. The wide hull and deep, blended- in wingroots, offer unparalleled interior space for comfortable seating, luxury lounges and room to move about. In the luxury design shown, 192 passengers are accommodated in wide reclining seats, facing rearward for maximum safety in rough water landings. When they weary of just setting there are broad aisles to promenade, a salon in which to lounge and chat, a bar and grill catering to the inner man and a library/writing room for that last minute letter or executive conference. Liberal space is provided for lavatories, galley, stores and rest rooms for the off-duty crew. At the rear of the passenger cabins, emergency exits unfold to form boat launching platforms. The exit corridors are flanked by stowage space for life preservers, outsize rubber rafts, etc.

The atomic power plant is situated on the ship’s center line, back in the extreme tail section. It follows the latest trend in aircraft A-design in which nuclear heat simply replaces the conventional fuel burners in jet engine combustion chambers. To keep the center of gravity low, the reactor is placed just above the keel, as far as possible from the plane’s passenger areas. In operation, molten metal is circulated through the super-hot atomic pile and then pumped into a heat exchanger mounted atop the reactor. The two form a unit, enveloped by a single, composite type shield to enclose dangerous radiation. Surrounding the exchanger shielding is a manifold in which nonradioactive water picks up the heat, transmitting it to the engine combustion chambers through insulated, high-pressure pipes.

The jetsâ€”six of themâ€”function in the usual way, drawing in air, compressing it and forcing it into the combustion chamber. Here it is expanded by nuclear heat, turns the engine-operating turbines and is expelled through the tailpipes in a propulsive blast. The water â€”or other heat transmitting mediumâ€” is then returned to the exchanger in a continuous, closed-circulation system. In addition to the jets, a liquid fuel rocket engine may be mounted in the tail for emergency or booster power.

These giant boats, capable of almost unlimited flight and able to take off or land in the open sea under the severest weather- conditions, offer transoceanic travelers a degree of speed, comfort and security now unattainable. Equally efficient over land routesâ€”their rugged keel structures are better able to sustain “belly landing” than any landplane fuselageâ€”they promise eventually to take over all long distance runs. You’ll be riding in them within ten years. Atomic planes are closer than you think!