It’s good to know that if I crash into a wall, my tires will survive even if I don’t. 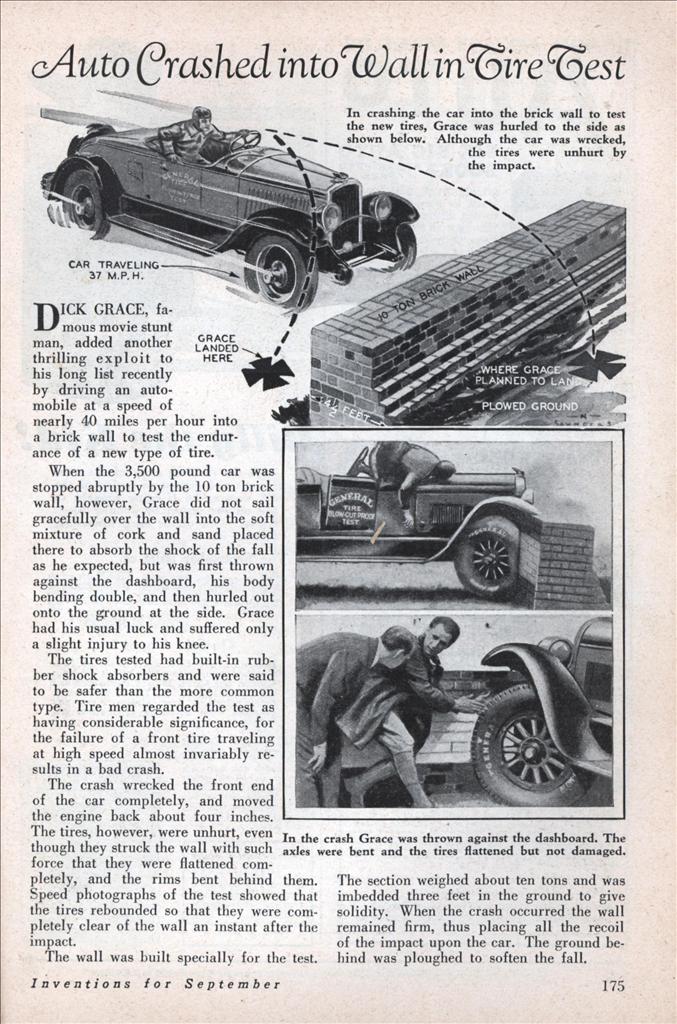 DICK GRACE, famous movie stunt man, added another thrilling exploit to his long list recently by driving an automobile at a speed of nearly 40 miles per hour into a brick wall to test the endurance of a new type of tire.

When the 3,500 pound car was stopped abruptly by the 10 ton brick wall, however, Grace did not sail gracefully over the wall into the soft mixture of cork and sand placed there to absorb the shock of the fall as he expected, but was first thrown against the dashboard, his body bending double, and then hurled out onto the ground at the side. Grace had his usual luck and suffered only a slight injury to his knee.

The tires tested had built-in rubber shock absorbers and were said to be safer than the more common type. Tire men regarded the test as having considerable significance, for the failure of a front tire traveling at high speed almost invariably results in a bad crash.

The crash wrecked the front end of the car completely, and moved the engine back about four inches. The tires, however, were unhurt, even though they struck the wall with such force that they were flattened completely, and the rims bent behind them. Speed photographs of the test showed that the tires rebounded so that they were completely clear of the wall an instant after the impact.

The wall was built specially for the test.

The section weighed about ten tons and was imbedded three feet in the ground to give solidity. When the crash occurred the wall remained firm, thus placing all the recoil of the impact upon the car. The ground behind was ploughed to soften the fall.