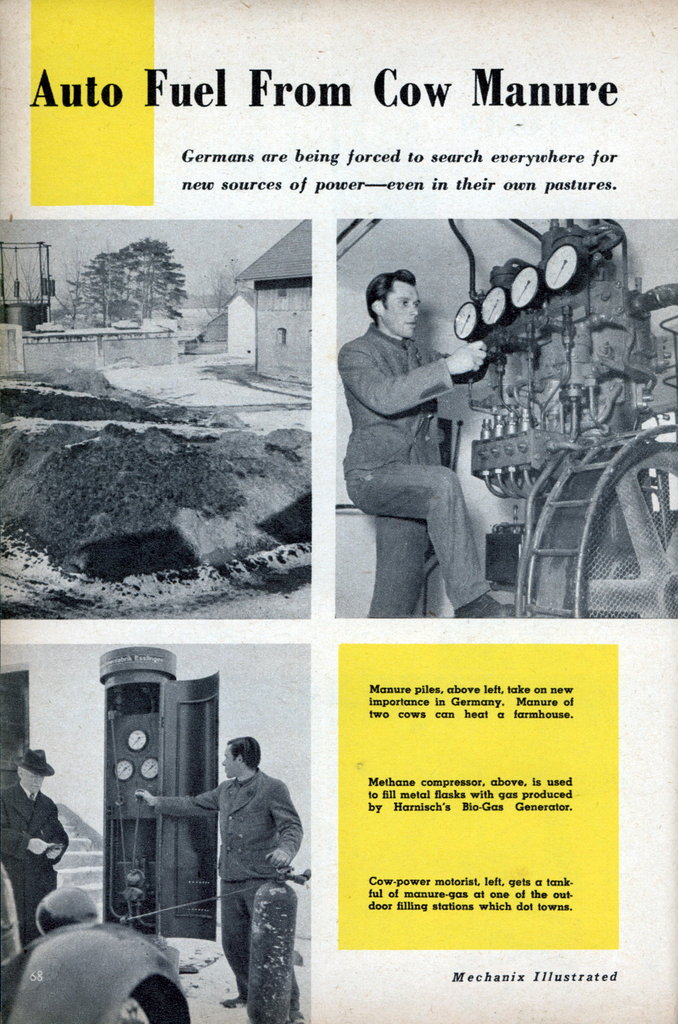 Germans are being forced to search everywhere for new sources of powerâ€”even in their own pastures.

THERE’S an old European proverb which says you can measure the extent of a farmer’s prosperity by the height of his manure pile. That saying is closer to the truth today in Germany than it has ever been before.

A German inventor named Harnisch has developed a simple device which converts manure into fuel. And this fuel is used to drive autos and tractors as well as provide household power.

The idea of using manure as fuel is not a new one. Cow manure has been used for this purpose for thousands of years in India and “Africa. As recently as 1912, many cities were operating gas lanterns on sewage gas.

This new Bio-Gas Generator is essentially a septic tank but with two additions.

One is a manure shredder through which the crude manure passes. The second is a heater which accelerates the fermentation of the manure. The heater is powered by the gas but uses only about one per cent of it.

The gas generated from the manure contains from 60 to 80 per cent methane, a fuel of higher caloric value than gasoline. The remainder is carbon dioxide which is filtered out in the processing. The methane is piped directly into appliances like stoves. Or, when used for tractors or autos, it is compressed into steel flasks.

The generator delivers ready-to-use methane within 12 hours after its charge. Manure of one cow provides enough methane for average cooking needsâ€”two to three cubic yards.

Methane from two cows is enough to heat the average farm house. With 20 head of cattle the farmer can operate a tractor for 120 days!

The present German shortage of steel flasks has led to the use of rubberized canvas bags. So, it’s not a strange sight to see buses trailing huge gas bags behind them and cars which appear to be suspended from blimps.

Cow-power research is still going on and gradually the Germans are discovering that there’s really much more to cow manure than meets the eyeâ€”or the nose!