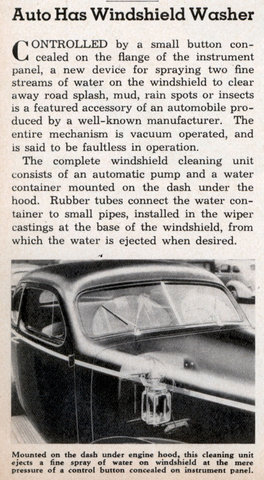 Auto Has Windshield Washer
CONTROLLED by a small button concealed on the flange of the instrument panel, a new device for spraying two fine streams of water on the windshield to clear away road splash, mud, rain spots or insects is a featured accessory of an automobile produced by a well-known manufacturer. The entire mechanism is vacuum operated, and is said to be faultless in operation.

The complete windshield cleaning unit consists of an automatic pump and a water container mounted on the dash under the hood. Rubber tubes connect the water container to small pipes, installed in the wiper castings at the base of the windshield, from which the water is ejected when desired.