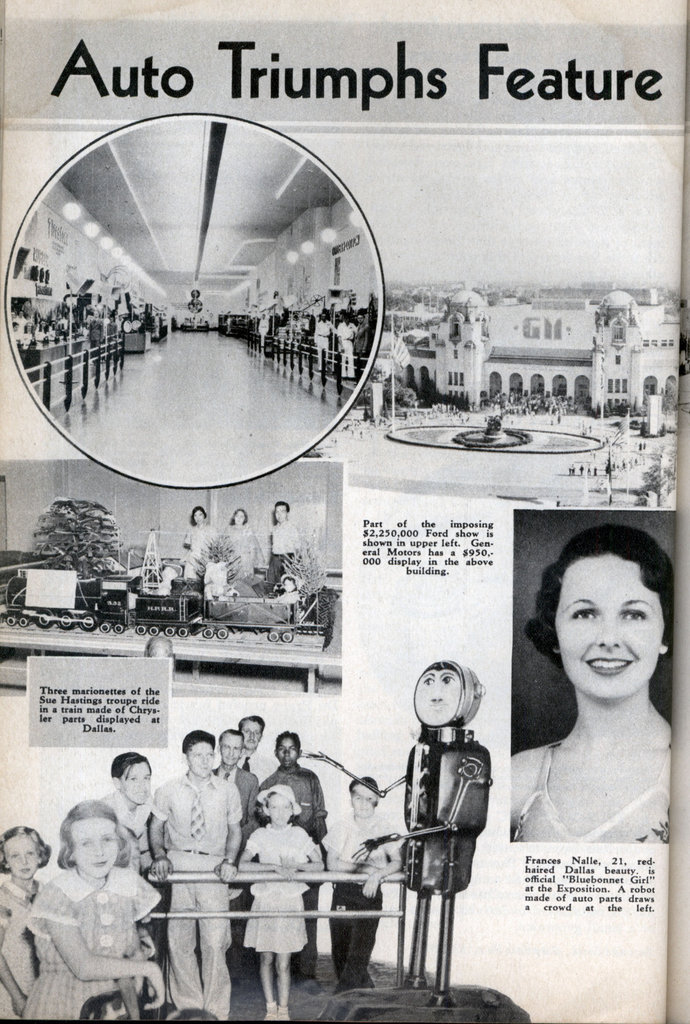 EXHIBITS showing automobile advances in speed and safety are almost half of the dollar value of the $25,000,000 Texas Centennial display now attracting visitors by the thousands to Dallas, Texas.

Largest exhibitor at the celebration marking the 100th anniversary of Texas freedom is Ford with a $2,250,000 display. General Motors has a building and display valued at $950,000. Chrysler is present with a $500,000 exhibit. The event continues through Nov. 29.

The Ford show includes 15 major exhibits in the air-conditioned Ford Exposition building. A replica of the company’s by-products plant, complete to railroad sidings, attracts model railroad enthusiasts. There is a service exhibit showing the development of auto service from the blacksmith days to the present.

All of the exhibits show methods of testing materials and means of assembling. A mechanical man made from auto parts is a feature of the Chrysler show. He not only turns his head and lifts his arm but he can hear and speak as well.

A notable system of electric lighting and an array of man-made lakes feature the Centennial grounds. A detail of Texas Rangers and the “Rangerettes” add color to the scene. The latter are young women in western garb who are official hostesses and information dispensers.

The National Cash Register Exhibit is a giant cash register which rings up the attendance as crowds flock through the turnstiles. Attendance during the first week was 426,625 and officials expect 10,000,000 visitors before closing.