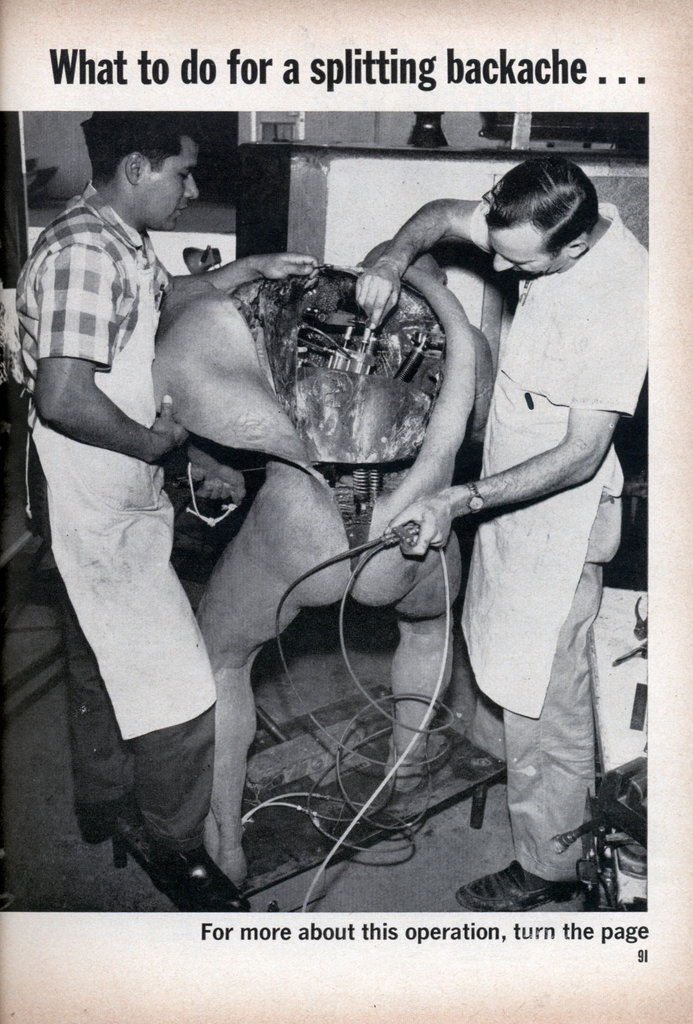 What to do for a splitting backache…

… automated caveman gets a rear-end drive

Despite his wide-open situation, the caveman on the preceding page is feeling no pain.

With fellow tribesmen, he will soon be settling down for a stay in the Ford Pavilion at the New York World’s Fair. Members of the “clan grin, groan, and grunt, view a giant bear with alarm, point, push, and haul a dead mammoth, draw wall pictures, and create fire. One of them invents the wheel.

They are creatures of Walt Disney and his WED studios in Glendale, Calif.

Visitors to the Fair will see and hear these animated cavemen from the seats of latest-model Ford convertibles gliding past a prehistoric panorama in a nine-minute trip on a Magic Skyway [PS, Nov. ’63]. Tape recordings in each car, played through its radio speaker, will tell what’s going on.

The exhibitâ€”from two-story dinosaurs that chew treetops to a cave kid gleefully twisting a pointed stick in a smoking chunk of wood-derives movement and sound from a system called Audio-Animatronics. It combines mechanics with pneumatic, hydraulic, and electronic controls. Sounds and gestures are first programed on magnetic tape, transferred in sequence to a master tape, and then synchronized.

When played, the tape controls lights, music, water over falls, and creature sounds and movements. Sound impulses trigger air valves in the bodies, causing varying pressures to shoot through plastic tubes and work springs that move like muscles.

In preparation for the two-year stint at the World’s Fair, every animated caveman, mammal, and grotesque bird in the Ford exhibit proved its durability in a grueling fatigue test. Each went through its motions a million to a million-and-a-half times before being okayed for its Fair debut.