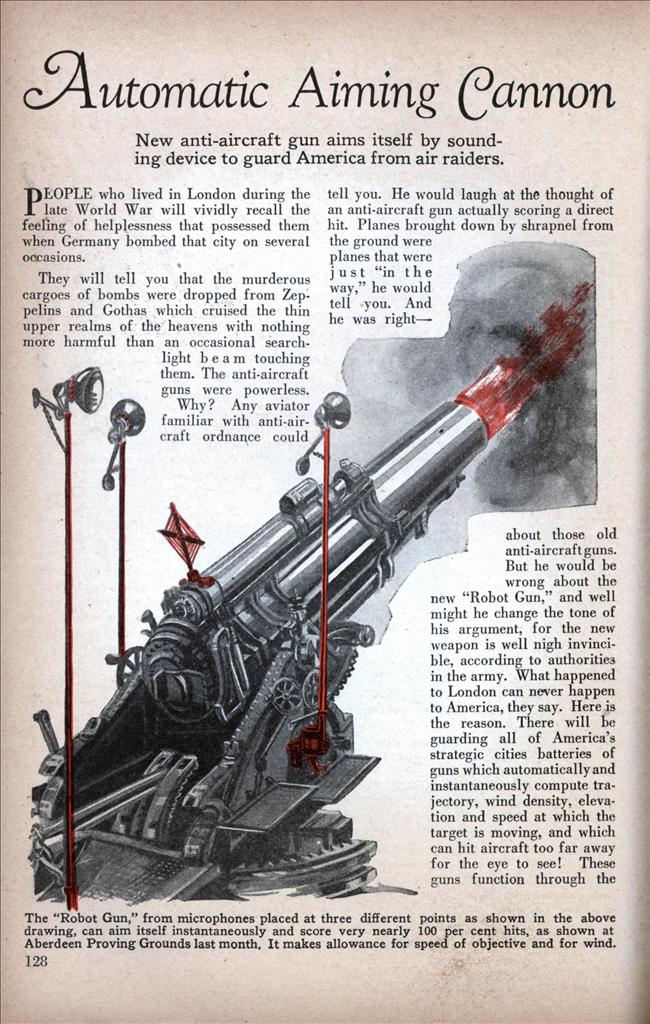 PEOPLE who lived in London during the late World War will vividly recall the feeling of helplessness that possessed them when Germany bombed that city on several occasions.

They will tell you that the murderous cargoes of bombs were dropped from Zeppelins and Gothas which cruised the thin upper realms of the heavens with nothing more harmful than an occasional searchlight beam touching them. The anti-aircraft guns were powerless. Why? Any aviator familiar with anti-aircraft ordnance could tell you. He would laugh at the thought of an anti-aircraft gun actually scoring a direct hit. Planes brought down by shrapnel from the ground were planes that were just “in the way,” he would tell you. And he was right— about those old anti-aircraft guns. But he would be wrong about the new “Robot Gun,” and well might he change the tone of his argument, for the new weapon is well nigh invincible, according to authorities in the army. What happened to London can never happen to America, they say. Here is the reason. There will be guarding all of America’s strategic cities batteries of guns which automatically and instantaneously compute trajectory, wind density, elevation and speed at which the target is moving, and which can hit aircraft too far away for the eye to see! These guns function through the medium of a new device called a torque amplifier, which automatically “lays” the gun, a field parlance has it. From three points, which define plane in which the target is moving, ears gather the sibilant the sibilant sounds of a distant motor. Instantly, as to a human brain, nerves of wire and stimuli of electricity instruct the torque amplifier as to the location of the target. With the speed of Electra the gun is aimed and fired. Not an attendant is near. The gun functions until a hit kills the droning of the motors.

With the old anti-aircraft guns data required for laying the guns were telephoned from a central station to the men directing them. Numerous instruments had to be used in observing the planes and computing the firing data. So many men were required to receive all the information and set the scales that not merely one but many errors resulted.

Then, after all was done the low velocity of the shells and the speed of the planes caused the projectile usually to be late in arriving where the plane had been, if it got that far. Little improvement was made over that system for some years after the war.

Today through the use of the equipment devised by the late Major W. P. Wilson of the Ordnance Bureau, the electrically controlled robot guns, which are three-inch pieces, are being proved through tests conducted at Aberdeen Proving Grounds, Maryland.

Army officers regard the new guns as almost human, in the same way people speak of the linotype and the adding machine; even more than human, because they minimize the effect of errors by the personnel.

It is predicted that a new day has dawned in the use of anti-aircraft ordnance, and that America will be immune from any attack by airplanes, formidable as the winged explosive carriers may be!