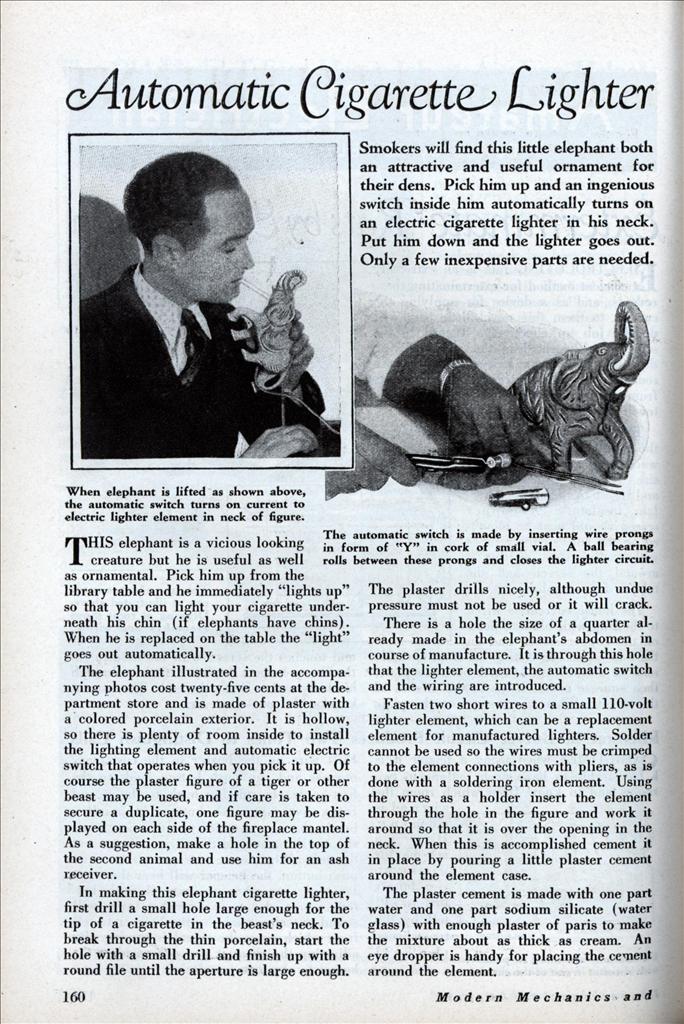 Smokers will find this little elephant both an attractive and useful ornament for their dens. Pick him up and an ingenious switch inside him automatically turns on an electric cigarette lighter in his neck. Put him down and the lighter goes out. Only a few inexpensive parts are needed.

THIS elephant is a vicious looking creature but he is useful as well as ornamental. Pick him up from the library table and he immediately “lights up” so that you can light your cigarette underneath his chin (if elephants have chins). When he is replaced on the table the “light” goes out automatically.

The elephant illustrated in the accompanying photos cost twenty-five cents at the department store and is made of plaster with a colored porcelain exterior. It is hollow, so there is plenty of room inside to install the lighting element and automatic electric switch that operates when you pick it up. Of course the plaster figure of a tiger or other beast may be used, and if care is taken to secure a duplicate, one figure may be displayed on each side of the fireplace mantel. As a suggestion, make a hole in the top of the second animal and use him for an ash receiver.

In making this elephant cigarette lighter, first drill a small hole large enough for the tip of a cigarette in the beast’s neck. To break through the thin porcelain, start the hole with a small drill and finish up with a round file until the aperture is large enough.

The plaster drills nicely, although undue pressure must not be used or it will crack.

There is a hole the size of a quarter already made in the elephant’s abdomen in course of manufacture. It is through this hole that the lighter element, the automatic switch and the wiring are introduced.

Fasten two short wires to a small 110-volt lighter element, which can be a replacement element for manufactured lighters. Solder cannot be used so the wires must be crimped to the element connections with pliers, as is done with a soldering iron element. Using the wires as a holder insert the element through the hole in the figure and work it around so that it is over the opening in the neck. When this is accomplished cement it in place by pouring a little plaster cement around the element case.

The plaster cement is made with one part water and one part sodium silicate (water glass) with enough plaster of paris to make the mixture about as thick as cream. An eye dropper is handy for placing the cement around the element.

For the automatic switch secure a one-dram glass vial, a cork and a small ball bearing that just fits the bottle. Run two short wires through the cork and spread the ends out like a broad “Y” as shown in the accompanying drawing. Place a little cotton in the bottom of the vial to serve as a cushion for the ball bearing, then insert the ball and finally the cork. The plug which holds the vial will close up the abdomen hole.

The drawing shows wiring arrangements. Connection from the elephant to the outlet box is made with silk covered wire. When the elephant is picked up to light a cigarette the bearing falls into the “Y” wires in the vial, closing the contact. The bearing returns to the bottom of the vial when the elephant is replaced on the table.

In carrying out the idea for providing a twin for the elephant, obtain another figure and use it for an ash tray. You can bore out a large hole in the beast’s back, using the file which you used for making the neck hole. Make the back hole large enough to hold a small tin receptacle, which should be inserted and secured with cement. A little paint of the same color as the beast’s back will smooth up the rough edges if applied carefully. Set this figure beside the other on your desk or mantelpiece.