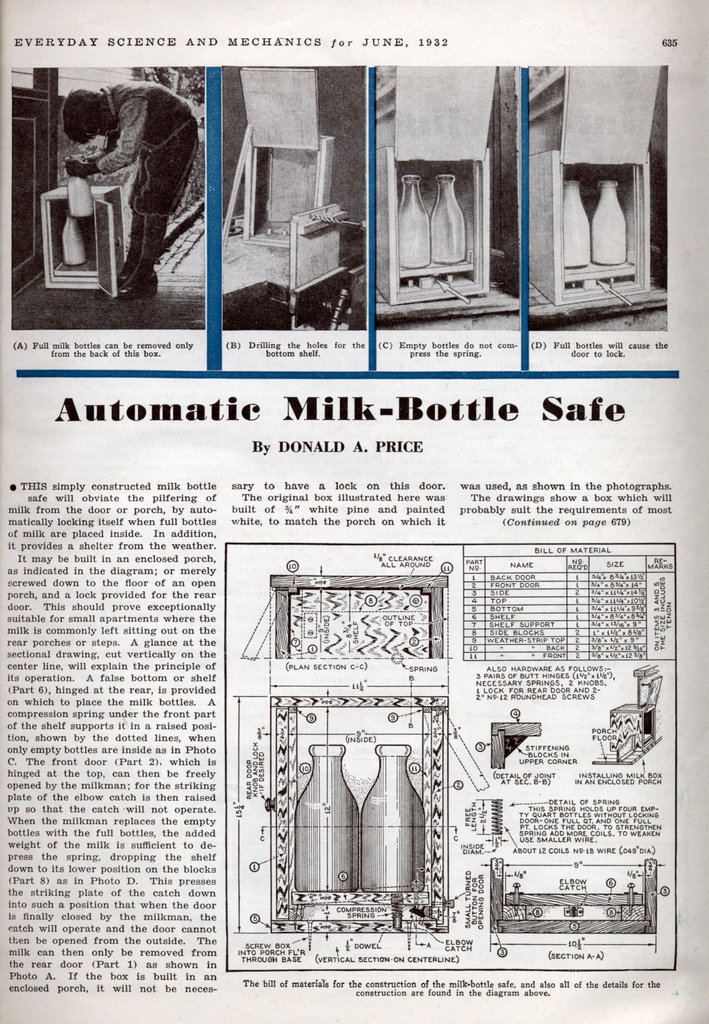 By DONALD A. PRICE

THIS simply constructed milk bottle safe will obviate the pilfering of milk from the door or porch, by automatically locking itself when full bottles of milk are placed inside. In addition, it provides a shelter from the weather.

It may be built in an enclosed porch, as indicated in the diagram; or merely screwed down to the floor of an open porch, and a lock provided for the rear door. This should prove exceptionally suitable for small apartments where the milk is commonly left sitting out on the rear porches or steps. A glance at the sectional drawing, cut vertically on the center line, will explain the principle of its operation. A false bottom or shelf (Part 6), hinged at the rear, is provided on which to place the milk bottles. A compression spring under the front part of the shelf supports it in a raised position, shown by the dotted lines, when only empty bottles are inside as in Photo C. The front door (Part 2), which is hinged at the top, can then be freely opened by the milkman; for the striking plate of the elbow catch is then raised up so that the catch will not operate. When the milkman replaces the empty bottles with the full bottles, the added weight of the milk is sufficient to depress the spring, dropping the shelf down to its lower position on the blocks (Part 8) as in Photo D. This presses the striking plate of the catch down into such a position that when the door is finally closed by the milkman, the catch will operate and the door cannot then be opened from the outside. The milk can then only be removed from the rear door (Part 1) as shown in Photo A. If the box is built in an enclosed porch, it will not be necessary to have a lock on this door.

The original box illustrated here was built of 3/4″ white pine and painted v/hite, to match the porch on which it was used, as shown in the photographs.
The drawings show a box which will probably suit the requirements of most families; it will receive four quart bottles of milk. If made any smaller, it would be difficult to make it operate properly; but, of course, it can be enlarged to take more milk by increasing the dimensions accordingly. The ordinary quart bottle requires a space 4-1/2 inches square.

By referring to the drawings and to the bill of materials, any one who wishes to make the box can easily cut out the different parts to the correct sizes without any further directions. A few notes as to the order of assembling may prove useful. First, the sides (3), top (4), and bottom (5), should be rabbeted and put together with waterproof glue. The dowel in the bottom of Part 5 must be set in place before these parts are glued together. The doors, (1) and (2), come next; they are to be fitted with plenty of clearance and the hinges rabbeted into position. After the doors are hung in place, the elbow catch is attached to the inside of the front door; so that its upper edge is 7/8″ above the bottom of the box. The side blocks (8) are then nailed in place.

Then the shelf support (7) is attached with hinges to the shelf. Part 7 is to be fastened to Part 5 with two 1-1/2″ No. 8 flat head screws. Holes must be bored (Photo B) in the shelf directly above these screws, so that this assembling can be made with the shelf still attached to Part 7.

Now, by measuring from the door to the inside of the hook of the elbow catch, the proper location of the striking plate on the shelf can be ascertained. Also note just where the dowel hits the lower side of the shelf. After removing the shelf, screw the striking plate on its lower surface and also bore the hole for the spring in the proper location above the dowel. Then nail on the weather strips (9, 10 and 11) fitting them snugly against the closed doors.

Before finally screwing the shelf in place, paint the box inside and out with two coats of outside paint.

While this is drying, the spring may be prepared. As noted on the drawing, this spring used in the original box was made of No. 18 gauge (.049-inch.) steel wire and lacquered. Its full length is about 2-1/2 inches, and it consists of 12 coils, 1/2 inch inside diameter. This spring held up four empty quart bottles, which do not even begin to depress the shelf (this is due to the initial tension on the spring as it must be put under some compression in order to get it into place). It may be noted from Section A-A, that the upper travel of the shelf is limited by two No. 12 round-head screws working freely through 3/8″ diameter holes in the shelf; 54″ washers are slipped under their heads before screwing them into place. With the spring shown, when one full quart and one full pint are placed on the front part of the shelf, it is lowered to the blocks and the elbow catch operates. If it is desired to have the box lock when a less quantity of milk is placed inside, it will be necessary to weaken the spring accordingly, by using smaller wire.

The box may be screwed (through the bottom) to the porch floor before the shelf is put in place. It may easily be installed in an enclosed porch by cutting a close-fit hole in the siding, trimming up the joint with moulding as shown in the diagram.