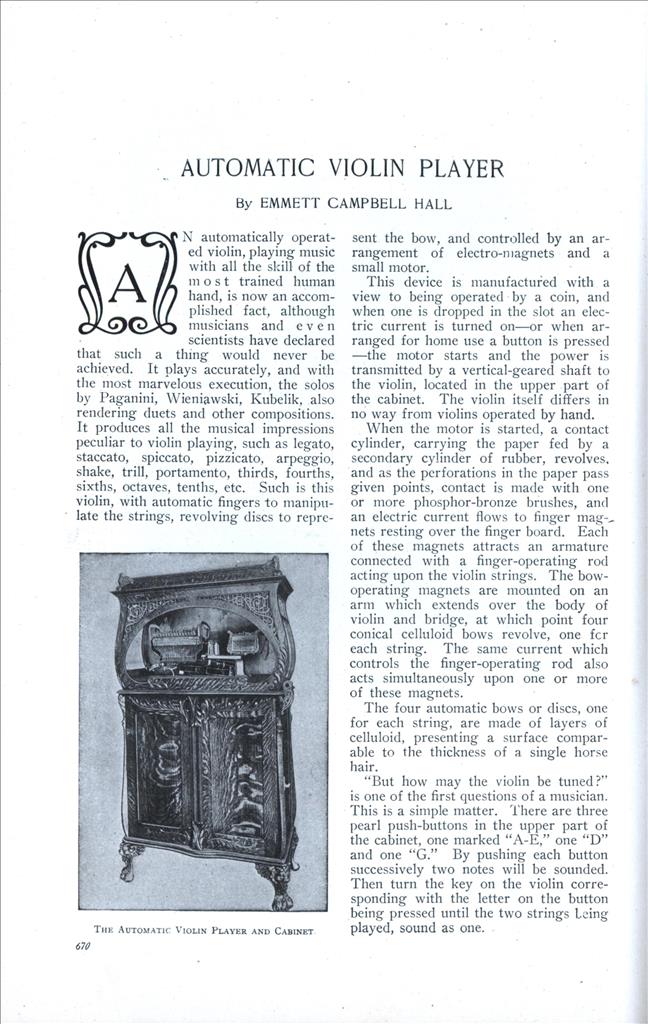 AN automatically operated violin, playing music with all the skill of the most trained human hand, is now an accomplished fact, although musicians and even scientists have declared that such a thing would never be achieved. It plays accurately, and with the most marvelous execution, the solos by Paganini, Wieniawski, Kubelik, also rendering duets and other compositions. It produces all the musical impressions peculiar to violin playing, such as legato, staccato, spiccato, pizzicato, arpeggio, shake, trill, portamento, thirds, fourths, sixths, octaves, tenths, etc. Such is this violin, with automatic fingers to manipulate the strings, revolving discs to represent the bow, and controlled by an arrangement of electro-magnets and a small motor.

This device is manufactured with a view to being operated by a coin, and when one is dropped in the slot an electric current is turned on—or when arranged for home use a button is pressed —the motor starts and the power is transmitted by a vertical-geared shaft to the violin, located in the upper part of the cabinet. The violin itself differs in no way from violins operated by hand.

When the motor is started, a contact cylinder, carrying the paper fed by a secondary cylinder of rubber, revolves, and as the perforations in the paper pass given points, contact is made with one or more phosphor-bronze brushes, and an electric current flows to finger magnets resting over the finger board. Each of these magnets attracts an armature connected with a finger-operating rod acting upon the violin strings. The bow-operating magnets are mounted on an arm which extends over the body of violin and bridge, at which point four conical celluloid bows revolve, one for each string. The same current which controls the finger-operating rod also acts simultaneously upon one or more of these magnets.

The four automatic bows or discs, one for each string, are made of layers of celluloid, presenting a surface comparable to the thickness of a single horse hair.

“But how may the violin be tuned?” is one of the first questions of a musician. This is a simple matter. There are three pearl push-buttons in the upper part of the cabinet, one marked “A-E,” one “D” and one “G.” By pushing each button successively two notes will be sounded. Then turn the key on the violin corresponding with the letter on the button being pressed until the two strings Leing played, sound as one.