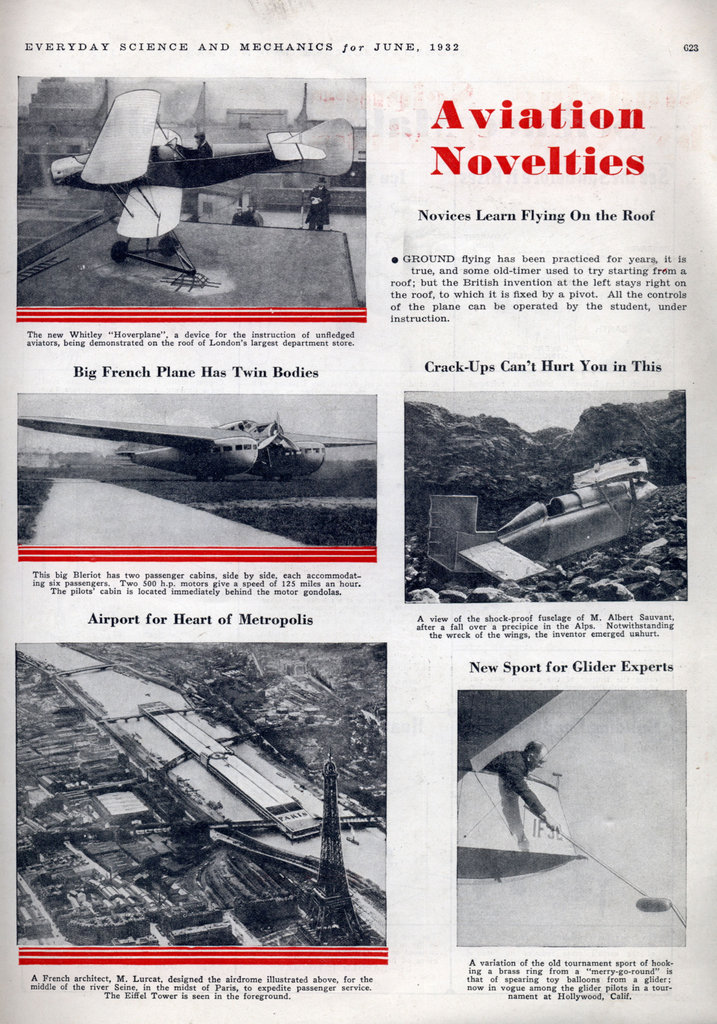 Novices Learn Flying On the Roof
GROUND flying has been practiced for years, it is true, and some old-timer used to try starting from a roof; but the British invention at the left stays right on the roof, to which it is fixed by a pivot. All the controls of the plane can be operated by the student, under instruction.

The new Whitley “Hoverplane”, a device for the instruction of unfledged aviators, being demonstrated on the roof of London’s largest department store.

Big French Plane Has Twin Bodies
This big Bleriot has two passenger cabins, side by side, each accommodating six passengers. Two 500 h.p. motors give a speed of 125 miles an hour. The pilots’ cabin is located immediately behind the motor gondolas.

Airport for Heart of Metropolis
A French architect, M. Lurcat, designed the airdrome illustrated above, for the middle of the river Seine, in the midst of Paris, to expedite passenger service. The Eiffel Tower is seen in the foreground.

Crack-Ups Can’t Hurt You in This
A view of the shock-proof fuselage of M. Albert Sauvant, after a fall over a precipice in the Alps. Notwithstanding the wreck of the wings, the inventor emerged unhurt.

New Sport for Glider Experts
A variation of the old tournament sport of hooking a brass ring from a “merry-go-round” is that of spearing toy balloons from a glider; now in vogue among the glider pilots in a tournament at Hollywood, Calif,