Science And Mechanics
Issue: Mar, 1936
Posted in: How to
No Comments on Avoiding Electric Shocks (Mar, 1936) 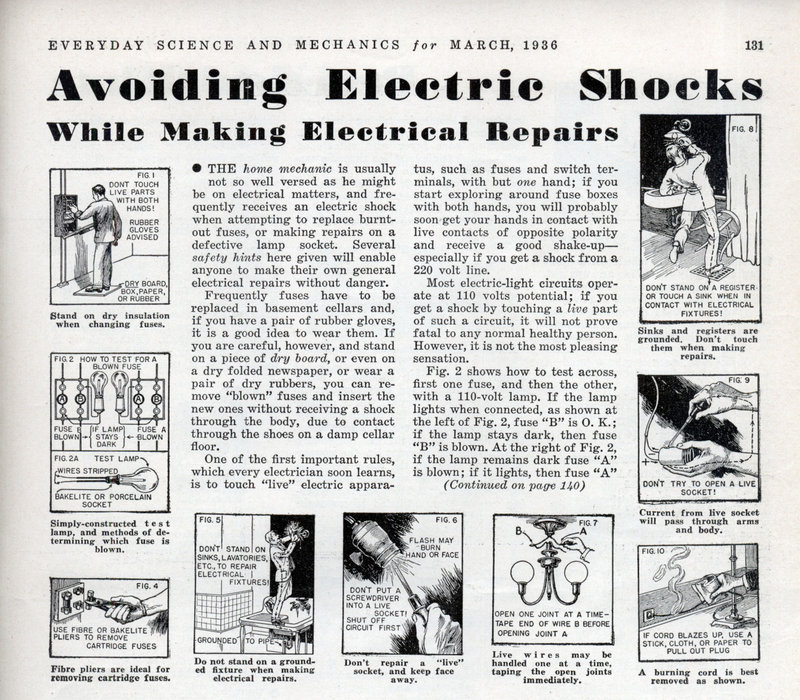 THE home mechanic is usually not so well versed as he might be on electrical matters, and frequently receives an electric shock when attempting to replace burnt-out fuses, or making repairs on a defective lamp socket. Several safety hints here given will enable anyone to make their own general electrical repairs without danger.

Frequently fuses have to be replaced in basement cellars and, if you have a pair of rubber gloves, it is a good idea to wear them. If you are careful, however, and stand on a piece of dry board, or even on a dry folded newspaper, or wear a pair of dry rubbers, you can remove “blown” fuses and insert the new ones without receiving a shock through the body, due to contact through the shoes on a damp cellar floor.

One of the first important rules, which every electrician soon learns, is to touch “live” electric apparatus, such as fuses and switch terminals, with but one hand; if you start exploring around fuse boxes with both hands, you will probably soon get your hands in contact with live contacts of opposite polarity and receive a good shake-upâ€” especially if you get a shock from a 220 volt line.

Most electric-light circuits operate at 110 volts potential; if you get a shock by touching a live part of such a circuit, it will not prove fatal to any normal healthy person. However, it is not the most pleasing sensation.

Fig. 2 shows how to test across, first one fuse, and then the other, with a 110-volt lamp. If the lamp lights when connected, as shown at the left of Fig. 2, fuse “B” is O.K.; if the lamp stays dark, then fuse “B” is blown. At the right of Fig. 2, if the lamp remains dark fuse “A” is blown; if it lights, then fuse “A” is O.K. Fig. 2A shows a typical test-lamp â€”the socket may be bakelite or porcelain socket, and the two free ends of the rubber covered wires are cleaned or “skinned” for about half an inch, for making contact with the switches, etc., which are to be tested.

If you have no test-lamp handy, you can locate a blown fuse by the substitution method, as shown in Fig. 3. In this case, by transposing the fuses and watching whether the lamps light in certain circuits, you can check up all the fuses in the fuse box, by inserting one and moving the one removed into the next fuse socket. Don’t leave permanently a 30-ampere fuse in a 10-ampere branch block; as this destroys the safeguard in that particular circuit, which the 10-ampere fuses are supposed to afford. In a “pinch” larger fuses may be used temporarily in a branch circuit; but they should always be removed as soon as possible, and the proper size fuse put in place. Shocks are often received when trying to replace cartridge fuses; but a pair of pliers made of fiber or bakelite, as shown in Fig. 4, will enable you to remove cartridge fuses safely.

In attempting to remove or repair an electric-light socket do not stand on a porcelain sink or a stove, or you will most probably receive a shock; the current passing from one side of the socket through your body down through the sink and water-pipe system. Of course, the only really safe way to make repairs on electric light sockets or floor outlets is to remove both fuses in the branch fuse-block supplying the circuit, or else pull out the main-switch on the meter board and “kill” the circuit thoroughly. When you push the wall switch to turn off the drop light or ceiling fixture, one side of the circuit only is opened, as the switch is a single-pole type and the other side of the circuit remains “alive.” Therefore, if you make a ground connection by standing on a hot-air heating register, touch a sink or other grounded object, you will receive a shock when you touch the live side of the socket or other device.

One of the most common electrical accidents which befalls the amateur electrician is the “fireworks” resulting from his first attempt at repairing a balky lamp-socket. Frequently a screwdriver is introduced into the socket, resulting in a flash of fire which usually blows a fuse and melts the end of the screwdriver. If the circuit is not killed by removing both fuses or opening the main switch, or at least by opening the wall-switch by pushing the black button (or push the lever to the “off” position) you had best not attempt to repair a live lamp socket. If you poke a screwdriver into a lamp circuit you will, of course, cause a direct short-circuit in most cases, as shown in Fig. 6; with resulting “fireworks” and possibly a burnt face or hand. So keep your eyes and face away from such electrical fittings because, at some time or other, it may be alive, simply because you forgot to turn the switch off or for some other reason.

Fig. 7 shows how live circuits may be handled, in connection with fixture repairs or replacements, simply by opening or connecting one joint at a time! Complete one joint and wrap it with tape before touching the other “live” wire, which can then be connected to the other remaining fixture wire quite safely. If the two live wires (“A” and “B” in Fig. 7) get together, you will have a short-circuit, a flash of sparks and a blown fuse! Also, keep live wires like this as far apart as possible, and cover one with tape as soon as the joint has been-made, before touching the other one! The reverse order is followed in disconnecting a fixtureâ€”open one side of the circuit at a time and, after the end of the live wire has been covered with tape, you can then open the second joint.

Fig. 8 shows how a person standing on a hot-air heating register may receive a shock through the body, when touching a grounded lamp socket. You may also receive a shock by touching the sink with one hand while the other is in contact with the grounded* lamp socket, or one of the live wires attached to the socket.

Once in a while, as a result of continual twisting, and the forming of knots in floor lamp cords, a short-circuit occurs and a flame may appear on the cord. The best thing to do is to pull the plug from the base receptacle; but don’t grab it with the bare hands, as the wire may be hot, due to the short-circuit, and burn your hands. Grab the cord with a piece of cloth, newspaper or a towel. Persons of a high nervous temperament will usually feel the effect of a 110-volt electric shock much more severely than others; the conductivity and also the moisture on the skin greatly affect the degree of shock. When the body is immersed up to the knees in a bath-tub filled with water, don’t touch electrical apparatus, for if there is a ground on the fixture you will receive a severe jolt, from the current passing through the body and the bathtub which is connected to the ground through the water-pipe system. The safest way is to step out of the tub, on to a dry bath mat or some dry papers, if nothing else, before touching the electrical fittings!

*”Ground” here means one side of the circuit accidentally connected to the metal shell of the socket or fixture.