Why don’t they just take their baby to the park with them instead? It has to be lighter than that receiver. And bringing a radio to the movies so other people can listen to your screaming baby is a swell idea. 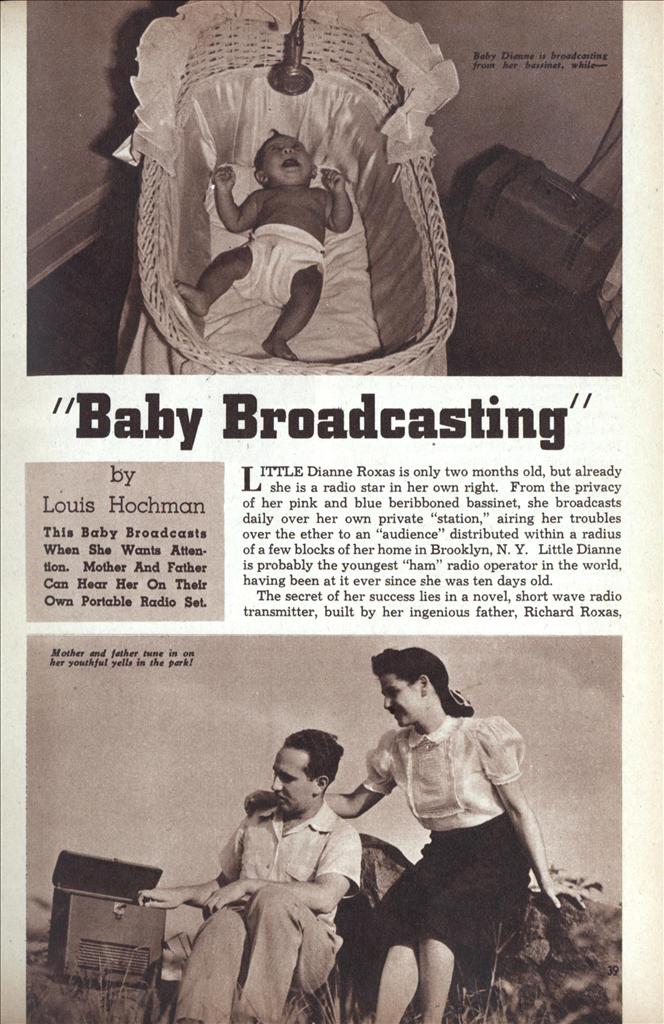 This Baby Broadcasts When She Wants Attention. Mother And Father Can Hear Her On Their Own Portable Radio Set LITTLE Dianne Roxas is only two months old, but already she is a radio star in her own right. From the privacy of her pink and blue beribboned bassinet, she broadcasts daily over her own private “station,” airing her troubles over the ether to an “audience” distributed within a radius of a few blocks of her home in Brooklyn, N. Y. Little Dianne is probably the youngest “ham” radio operator in the world, having been at it ever since she was ten days old.

The secret of her success lies in a novel, short wave radio transmitter, built by her ingenious father, Richard Roxas, which is placed near her bassinet and has a sensitive microphone suspended over her head to pick up and transmit her every coo, gurgle, and cry. However, entertaining as her infantile broadcasts are, the outfit serves a real practical purpose in acting as a mechanical nurse-maid for the baby, permitting her parents to take walks together, drop in on the neighbors for a game of bridge, or go to the movies, and still keep tuned in to her with their small portable radio which they carry with them. In this way, they can instantly hear when she wakes up and begins to cry.

“The freedom we enjoy through this setup,” says Mr. Roxas, “is the envy of our friends and neighbors. When the baby first came, it looked as though we’d never get a chance to go out together, until I hit on the idea of watching her by remote control. I rigged up the small transmitter and microphone for the baby’s use and now we can come and go as we please.

“The most important part of it, to mind, is the fact that, with the radio, we can have perfect peace of mind. I can feel much more secure about baby than if I had had to leave her with a stranger. It’s economical, too, since it saves us the expense of hiring someone to watch her. This way, we can go do our shopping any time we want to and, with the radio at our side, feel as though we were right in the same room with baby all the time.”

Neighbors and nearby shopkeepers, too, co-operate with the Roxas. If the parents plan to go somewhere outside the broadcasting range of their radio, the neighbors tune in on short wave and listen for gurgles or howls.

“The microphone over her crib is so sensitive it picks up every sound in the room— the baby’s breathing, a sneeze, the shade’s rattle, auto horns outside, even planes overhead. It’s a real comfort to be able to leave the house and still keep in touch with the baby. I feel as though she is under my own supervision.”

A typical incident is related by Mr. Roxas. “One night,” said he, “we decided to go to a movie, and asked a neighbor to ‘keep an ear’ on the baby over her own radio. We then left, taking our own portable along with us.

“All was quiet for some time while we watched the movie, when suddenly, out of the portable receiver in my hands, came the unmistakable wail of little Dianne. Timing the set low, we listened to her for a while, wondering whether or not to leave the show and go to her. Then, to our relief, we heard a door open, foot-steps approach, and the familiar voice of our neighbor speaking to the child in soothing tones.

“A few minutes later, the neighbor’s voice’ came booming out of the loudspeaker.

” ‘Relax, you two,’ came her words, ‘the situation is well in hand. All Dianne wanted was a clean diaper. How’s the movie?’ Needless to say, we relaxed and enjoyed the picture.”

The Roxas also use the radio to communicate with each other. If Mr. Roxas is out in the garden or taking a stroll, Mrs. Roxas can call him home to dinner by speaking into the microphone. If he’s doing some shopping for her and she suddenly remembers something she forgot to tell him to get, she can still tell him over the radio.

“You see?” she says, “it serves many purposes.”

The small portable transmitter, which constitutes the baby’s private broadcasting “station,” has an oscillator similar to the type used in wireless record players. It works without an antenna and operates on only 1-1/2 watts, bringing the operating cost to only a few cents for over a 24-hour period of constant use. Its broadcasting range covers a radius of a couple of blocks around the house.

The portable receiver is a five tube superheterodyne, operating at six watts. The most economical feature of this portable is the fact that it operates on a storage battery which is recharged by simply plugging the outfit into an electric outlet in the house.

Mr. Roxas, who is production manager at Audivision Commercial Film Producers, has been an ardent amateur “ham” for over 12 years. He builds most of his own radio equipment, and still holds a “ham” license, W2BOP, although he hasn’t done much over the amateur air bands recently, due to local antenna restrictions. A license is required to operate the “nurse-maid radio.”

Baby Dianne, blissfully unaware of it, meanwhile continues to fill the air with her howls. If you own a short wave radio, maybe you’ll pick her program up sometimes.