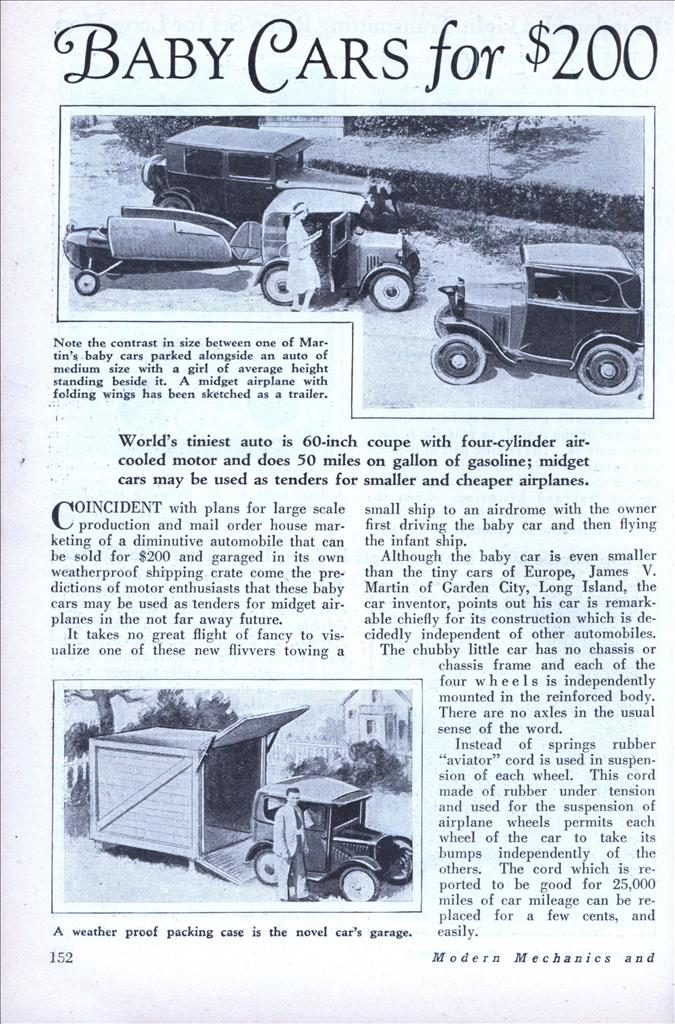 World’s tiniest auto is 60-inch coupe with four-cylinder air-cooled motor and does 50 miles on gallon of gasoline; midget cars may be used as tenders for smaller and cheaper airplanes.

COINCIDENT with plans for large scale production and mail order house marketing of a diminutive automobile that can be sold for $200 and garaged in its own weatherproof shipping crate come the predictions of motor enthusiasts that these baby cars may be used as tenders for midget airplanes in the not far away future.

It takes no great flight of fancy to visualize one of these new flivvers towing a small ship to an airdrome with the owner first driving the baby car and then flying the infant ship.

Although the baby car is even smaller than the tiny cars of Europe, James V. Martin of Garden City, Long Island, the car inventor, points out his car is remarkable chiefly for its construction which is decidedly independent of other automobiles. The chubby little car has no chassis or chassis frame and each of the four wheels is independently mounted in the reinforced body. There are no axles in the usual sense of the word.

Instead of springs rubber “aviator” cord is used in suspension of each wheel. This cord made of rubber under tension and used for the suspension of airplane wheels permits each wheel of the car to take its bumps independently of the others. The cord which is reported to be good for 25,000 miles of car mileage can be replaced for a few cents, and easily.

The wheels are held under power control and the steering mechanism by universal joints in their hubs.

Coupe models of Martin’s baby car have been built with a wheelbase of 60 inches and weight of 600 pounds. These figures are compared to the American-built Austin cars which are expected to be delivered early next year. The Austin wheelbase is 75 inches, the weight 950 pounds, and it is anticipated that the American-built Austin will sell for around $500. Speed tests credit the Austin seven with a 100-mile run at the rate of 83.61 miles an hour and economy tests show it operated 56.4 miles on a gallon of gasoline. So it is seen that the Martin baby may have some competition. For the basis of further comparison it is pointed out that the wheelbase of the Model A Ford, the smallest American car now in production is 103-1/2 inchesâ€”some two-thirds longer than the Martin baby.

The Martin babe is equipped with a four-cylinder, air-cooled motor and the usual attachments such as electric starter, speedometer, ammeter and other devices.

The inventor maintains that his car is admirably suited to distribution through mail order houses because it requires virtually no servicing. Due to its unusual construction there are, aside from the engine, very few moving parts that require lubrication and these can be lubricated for the life of the car before shipping. It can be shipped in a weatherproof packing case with a hinged door so that the crate can be used as a garage. The car is credited with 50 miles on a gallon of gasoline and a proportionate quantity of oil.

Traffic experts are beginning to ponder the possibility of increased traffic hazards with the prospective influx of baby cars, low in price. It is anticipated that the production of such cars may result in an even greater acceptance of the two-car-family idea with the tiny cars used as auxiliaries for other members of the family.

While marketing plans for the new Martin baby car were still being studied the announcement was made in New York of an international offering of stock in the new American Austin Car Company, Inc., being formed for the American building and American distribution of the popular little English car.

Coupled with these plans for marketing tiny cars is the prospect for heavier production of small airplanes. A considerable advance in private flying has been noted during recent years and there is a steady increase in interest in individually owned light airplanes.

Men who saw only a scattering of automobile owners in the early days of automobile development see no reason why there should not be an enormous increase in the number of light airplanes privately owned and operated within a few years. Airplanes are being made safer, lower in first cost price and cheaper to operate so that even today the light plane can be purchased for the price of a medium sized car and operated at about the same moderate expense.