Modern Mechanix
Issue: Aug, 1929
Posted in: Entertainment, How to
4 Comments on Back of the Scenes at the Sideshow (Aug, 1929) 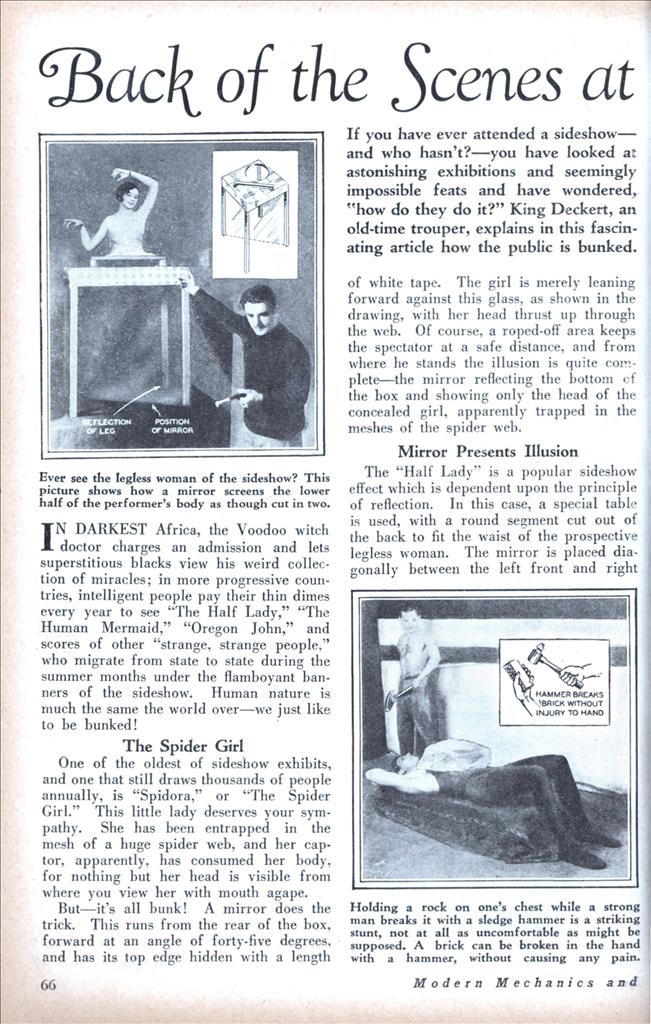 Back of the Scenes at the Sideshow

If you have ever attended a sideshow— and who hasn’t?—you have looked at astonishing exhibitions and seemingly impossible feats and have wondered, “how do they do it?” King Deckert, an old-time trouper, explains in this fascinating article how the public is bunked.

IN DARKEST Africa, the Voodoo witch doctor charges an admission and lets superstitious blacks view his weird collection of miracles; in more progressive countries, intelligent people pay their thin dimes every year to see “The Half Lady,” “The Human Mermaid,” “Oregon John,” and scores of other “strange, strange people,” who migrate from state to state during the summer months under the flamboyant banners of the sideshow. Human nature is much the same the world over—we just like to be bunked!

The Spider Girl One of the oldest of sideshow exhibits, and one that still draws thousands of people annually, is “Spidora,” or “The Spider Girl.” This little lady deserves your sympathy. She has been entrapped in the mesh of a huge spider web, and her captor, apparently, has consumed her body, for nothing but her head is visible from where you view her with mouth agape.

But—it’s all bunk! A mirror does the trick. This runs from the rear of the box, forward at an angle of forty-five degrees, and has its top edge hidden with a length of white tape. The girl is merely leaning forward against this glass, as shown in the drawing, with her head thrust up through the web. Of course, a roped-off area keeps the spectator at a safe distance, and from where he stands the illusion is quite complete—the mirror reflecting the bottom of the box and showing only the head of the concealed girl, apparently trapped in the meshes of the spider web.

Mirror Presents Illusion The “Half Lady” is a popular sideshow effect which is dependent upon the principle of reflection. In this case, a special table is used, with a round segment cut out of the back to fit the waist of the prospective legless woman. The mirror is placed diagonally between the left front and right rear legs of the table. Looking at the alcove from a fair distance, you get the impression of there being nothing whatsoever under the table—thanks to the mirror —and the illusion of a legless woman is complete.

Did you ever see the “Sword Ladder?” In this effect, the performer, barefooted, ascends and descends a ladder of swords, and all this without injury to himself. Moreover, the swords are sharp—the “barker” is there to show you with the archaic method of cutting a lock of hair that these are no playthings.

then, does the performer do it? The answer is fairly simple. In the first place, the swords are really quite dull, the razor-like keenness being found only on the extreme tip and base of the blade. In the second place, the feet of the performer have been toughened to a remarkable degree through a continual application of alum or tannin over a period of from six months to many years. The rest is simple. You probably know that even a comparatively sharp razor will not cut you if it is pressed directly into your hand and at right angles to the skin. The sword climber operates on the same principle. By balancing his weight carefully so as to avoid any sideslip, he can ascend and descend the ladder with perfect impunity.

Breaking a Rock on One’s Chest The strong man, too, comes in for his share of bunking the public. One of his favorite effects is the famous “Rock Breaking Test,” in which a huge slab of granite is broken in two with a sledge hammer while it is reposing on the chest of our hero.

There is no trickery connected with this masterpiece of deception; rather the effect depends upon a public whose knowledge of the laws of inertia is a little less than nothing. Even a brick mason could witness the demonstration and marvel, yet he performs the same effect every day when he places a brick in his hand and breaks it in twain with a few light taps of a hammer. He would deem it absurd if anyone were to ask him if the breaking of a brick in this fashion did not hurt his hand; yet he stands in open-mouthed wonder when the same effect is performed on a large scale within the glamourous confines of the sideshow tent. Actually, the strong man experiences very little discomfort—the hammer being so small in proportion to the weight of the stone that the force is distributed to all parts of the block and thereby made almost negligible.

The fabled mermaids of yore had their abode in the briny deep and only poked their adorable noses out of the water at the witching hour. But . . . the mermaid you see in the sideshow . . . There she sits, day after day, entirely submerged in a glass tankful of water, with the fishes playing around her body, never coming to the surface for a whiff of fresh air. .

Underwater Mermaids How does she do it? “Simply because,” as the barker puts it, “simply because she’s a real, live mermaid, and real live mermaids like that kind of stuff!” Actually, however, the “nigger in the woodpile” is something quite different. The mermaid is never in the water! She isn’t even wet! All she does is take her place behind a glass tank which contains a varied collection of fish, water and seaweed. The walls of the box in which she sits is painted to resemble marine life, and from a distance the illusion of one large tank of water with a mermaid seated in the center of it is effected.

A popular sideshow attraction which has enjoyed considerable success during the past few years is ‘”The Petrified Lady.” This illusion can take other forms, such as “The Petrified Man,” “Oregon John,” etc., the effect in each case being the same—namely, that of a petrified person who still breathes, and in some cases even talks.

Pump Serves Dummy as Lung The method commonly employed in the construction of this freak is the familiar wax dummy. This can be made very lifelike, and with the addition of a pair of mechanical lungs, operated by electric bellows from below the couch on which the dummy lies, can be made to breathe with a naturalness which is altogether human. Various other attachments are added to the figure, enabling her to froth at the mouth in a very unladylike manner, snore with great gusto, etc. With the use of advanced radio, some of these petrified figures are even made to answer simple questions which the audience may call out.

Naturally enough, everything about the sideshow cannot be bunked. That would be almost ‘impossible. Many of the sideshow attractions are legitimate enough. The outdoor free stunts which are used to ballyhoo the show are likewise of a bona fide nature. Among the more spectacular of these is the shooting of a man from a cannon to a net 130 feet distant, the motive power being a large spring concealed in the cannon; and the “Flaming Torch” act in which a gasoline-drenched figure is set afire before diving 60 or 100 feet downward to a small tank of water.

But—inside the tent you will find 75 percent pure bunk. Not that it matters. Genuine or fake, the attraction is sought by an eager public, who year after year are a living testimony to the thing which keeps the carnival and sideshow in existence—we just like to be bunked!