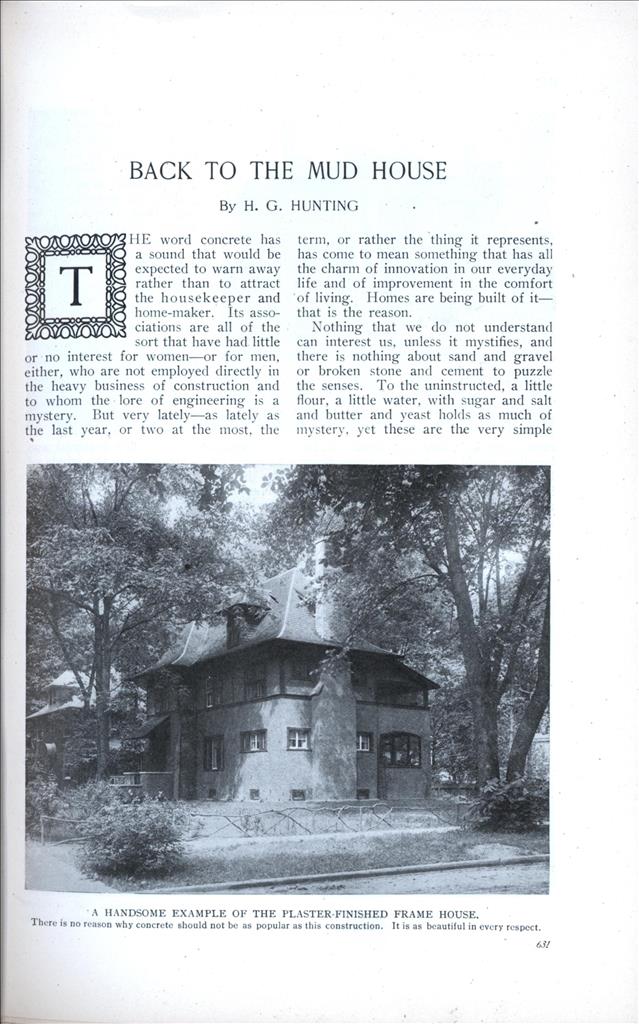 IE word concrete has a sound that would be expected to warn away rather than to attract the housekeeper and home-maker. Its associations are all of the sort that have had little or no interest for women—or for men, either, who are not employed directly in the heavy business of construction and to whom the lore of engineering is a mystery. But very lately—as lately as the last year, or two at the most, the term, or rather the thing it represents, has come to mean something that has all the charm of innovation in our everyday life and of improvement in the comfort of living. Homes are being built of it— that is the reason.

Nothing that we do not understand can interest us, unless it mystifies, and there is nothing about sand and gravel or broken stone and cement to puzzle the senses. To the uninstructed, a little flour, a little water, with sugar and salt and butter and yeast holds as much of mystery, yet these are the very simple materials of which the housewife makes her bread. In a whimsical sense concrete may be called the bread of the building world, as fussy overdecoration has long been called its gingerbread, and it and its uses are as easy to comprehend and quite as interesting as the staple of our tables.

Cement and sand and stone and water are the ingredients of the “dough” from which houses are being made. When they are properly mingled together, in proportions to suit their purpose, the mixture is a really wonderful thing. If you were to hollow out a house with the labor of years from the solid rock of the everlasting hills, you would not have a more substantial, and not nearly so beautiful a home as if you had constructed it simply and easily from this mud.

When the use of concrete for house-building began to receive popular attention, a few years ago, the first effect of the appearance of the new material was to rouse great prejudice in the minds of the beauty lovers. It wasn’t pretty. Though houses had been built, many years ago, by the solid concrete method, the builders tried to popularize the block method in its more modern application. The blocks had little attractiveness about them, when they first appeared, and there were other complaints of them, regarding their lack of weather-resisting power. Looking at the houses which are now built of blocks and by the solid method, we wonder why such prejudice ever existed, for the beauty of them is not less than that of any other material. For now that dampness is done away with by the admixture of waterproofing material in the making of the concrete, and methods of producing artistic effects have progressed, the other valuable characteristics of the material are recognized more generally.

For ease of construction and repair, solidity and permanence, protection against fire and consequent low insurance, and, considering all these things, the cheapness of original cost, the concrete house cannot be equaled. No other material approaches it in any of these points except brick in its fire-resisting power, and when economy of space is considered, brick cannot compete. Homes are now being built ranging in price all the way from $1,500 for a cottage to many thousands for a palatial mansion. Houses costing $3,000 to $4,000 are in evidence in many parts of the country, to prove that concrete is a satisfactory material for the construction of the moderate-priced home, and their appearance is more significant of the future than any other type. It is the home of about this cost that appeals to the average home-builder and the discovery that all the advantages of the new material may be had for as little as the far less satisfactory older ones has caused wonderful strides to be made in the use of it. The fact that the prices for lumber are soaring and that the cost of concrete is growing yearly less is enough in itself to undermine rapidly any prejudice that was once deep-rooted against the latter.

Considerable attention was given, recently to Mr. Edison’s scheme of pouring a concrete house complete in one block, or monolith, and from that form of construction up to the most elaborate and ornate, the work of experiment—and success — has progressed. Generally it has been admitted that the most pleasing effects have been obtained by the simplest • methods and treatment. Formerly trouble and expense were not spared in the effort to make special faces for the blocks used, and the effects were not such as to attract. Rock-facing was as near popularity as any finish. Now, the rock-facing, which has always an artificial look, has nearly disappeared from use and plain, fine or coarse, surfaces are more in favor. The introduction of the “snow-white” cement, and the stucco decoration have been welcomed and some of the edifices which have been made with the use of these, are as handsome as any of marble or other costly stone, while far less expensive and more permanent and safe from destruction by fire.

The block house is still built and has much favor because of the more attractive form in which the blocks are made. Solid walls, poured in the movable forms, • with reinforcing of steel rods embedded within them are receiving more attention. Some houses are even being constructed, wall by wall, flat upon the ground, the walls afterwards being tipped up into place when ready. It is interesting to recall that the earliest houses built of concrete in the country were of the solid form, though without the reinforcing. They have stood staunch, through all sorts of conditions, in a manner to prove the stuff that is in them.

Criticism of concrete, because of the fact that foolish designs or unwise construction have appeared when it was used as a medium, cannot hold. Other mediums have suffered as much. Nothing can ever be put into the form of concrete more unlovely than some of the sins against artistic beauty which have appeared in stone or brick or wood. Design is younger in this branch of construction, but it is becoming accustomed to the stuff and almost monthly the gain is noticeable. Concrete seems to lend itself especially well to the colonial or mission forms of design and the stately beauty and simplicity of these need no advocate at this late date. Some archi- tects are using stucco for an outside surface to a very large extent and the effect on designs of the character mentioned is a delight. The experiment of construct- ing a thin double wall, with stucco upon expanded metal reinforcement seems to have met with some success, it may also be mentioned, and the small expense of this recommends itself.

One of the interesting developments in the direction of adoption of concrete as a general material for home-building, is the recent construction of concrete villages. The village of Hawarth, N. J., is a conspicuous example of this movement. There houses have been built both by the block method and the solid. The latter are found to cost about ten per cent more than the former, because of the forms used, especially for the addition of decorative designs. It is also freely announced that the buildings of both kinds cost more than frame construction, but when their advantage in low insurance and repair charges is considered, they so satisfactorily demonstrate economy, that this was the very point upon which the use of the material was decided, by the company under whose direction the work has been done. Other concrete villages will be built, following the evident success of this. The houses are substantial and attractive.

But, not only is the use of concrete for walls and foundations coming more and more into favor; it has made its appearance inside the houses. Stairways and columns, window seats and decorative features are as readily formed of the plastic material as the heavier work. With attention to the detail and to symmetry, the effects are as pleasing as any possible with wood or brick and are almost indestructible. Relief figures for decorative purposes, are easily made in the solid walls, also, and stair-rails and newel-posts, ornamental flower-pots and a great variety of other things of the sort are easily provided for in the material of which the whole house is built.

Edison announces that he has a new formula for concrete that will make building with it so cheap that the poor.

everywhere within reach of materials for the ingredients, need not build of wood hereafter. He expects to make public demonstration of his theories during the coming summer and the work will be watched with greatest interest.

One great advantage of concrete over other building materials is the fact that temperature changes penetrate walls of this stuff very unreadily and a house of it is both cooler in summer and warmer in winter than any constructed of wood or stone or brick. Neither vermin nor mice can find lodging where walls of solid concrete are presented instead of cracks and holes and chinks between boards or stones inviting their entrance. In every way the building of concrete is cleaner and more sanitary than any of its rivals. It is dust-proof, it is more easily clean-able, it is less easily marred or soiled or defaced. These things taken with the great considerations of safety against fire or wind or rain, or any other of the ordinary workings of Nature, the sum of the arguments in its favor is convincing. The concrete house has come and is coming in larger numbers daily. The wider the general acquaintance with it, the more rapid will be the completion of its triumph.