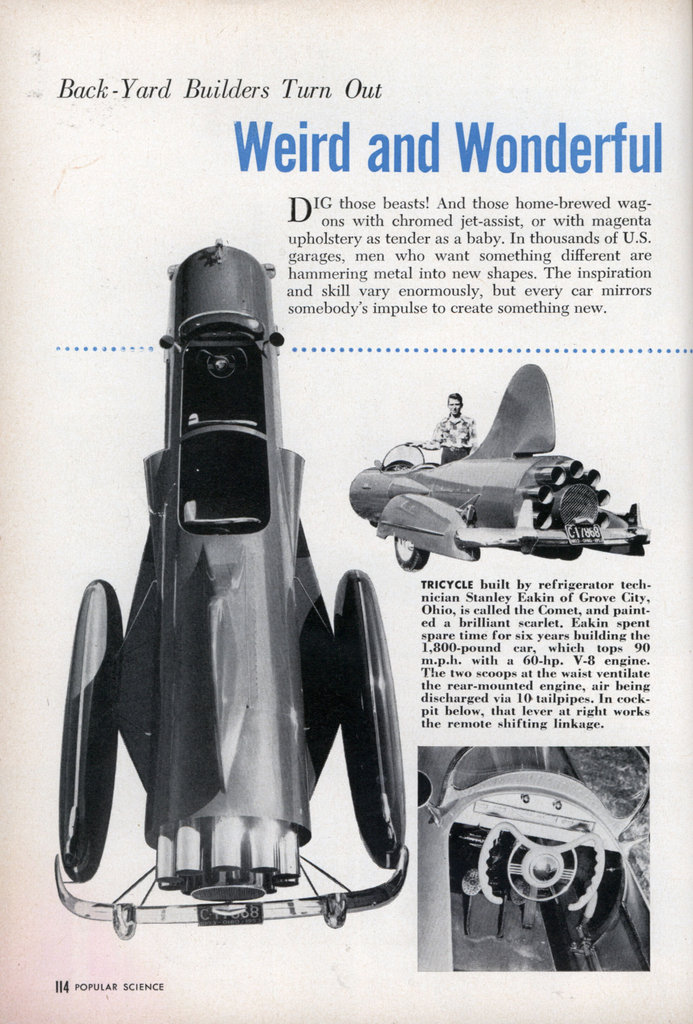 DIG those beasts! And those home-brewed wagons with chromed jet-assist, or with magenta upholstery as tender as a baby. In thousands of U.S. garages, men who want something different are hammering metal into new shapes. The inspiration and skill vary enormously, but every car mirrors somebody’s impulse to create something new.

TRICYCLE built by refrigerator technician Stanley Eakin of Grove City, Ohio, is called the Comet, and painted a brilliant scarlet. Eakin spent spare time for six years building the 1,800-pound car, which tops 90 m.p.h, with a 60-hp. V-8 engine. The two scoops at the waist ventilate the rear-mounted engine, air being discharged via 10 tailpipes. In cockpit below, that lever at right works the remote shifting linkage.

MINIATURE MILL in this small Cad began life in a ’32 Austin. But it’s got plenty of muscle for its present jobâ€”ear hits 70.

THIS HOT HYBRID is a crossbreed of two GM divisions. Starting with a Corvette with a jazzed-up Chevvy engine, Bill Frick, Long Island mechanic, spent 200 man-hours putting in a Cadillac plant. Car weighs 75 pounds less than before, has solid valve lifters and manual shift in place of Hydra-Matic. It now belongs to R. Rutherford of West Palm Beach.

MANY TANKS, five to be exact, went into this bright red roadster. Four interceptor-plane drop tanks were reworked for the fenders; a bomber tank made the body. Owner M. T. Avila Jr., Tulare, Calif., has laid out $8,200 on it so far. Car has a Ford frame, Chevvy grille, Olds instruments, and is 17 feet long. A Merc power plant makes it go.

MATE A MANTA RAY with a jet plane and this is what you get. Builders V. F. Antoine and G. K. Hire, of Whittier, Calif., work on guided missiles for a living. Shout is a chromed aluminum casting. Bumpers were fabricated from Hudson parts.

IF POP RIDES, he has to straddle the deck, but the three Tobias kids of Bakersfield, Calif., can shoehorn into the single seat. With a light, glass-fiber body, car has a curb weight of 250 pounds. But it can get up to 25 m.p.h, on its 1-1/2-hp. air-cooled engine. Shortened Model T side rails made the chassis, and that fancy grillwork in front came from Buick radio grilles. Headlights were once Dodge parking lights. Car is less than two feet high.

TRIPLE-TAILED CRAFT began as a ’51 Studebaker sedan, was drastically rebuilt in 4,000 man-hours of labor. It has a V-8 engine and a curb weight of 1,000 pounds. The body is made of 14 glass-fiber subassemblies. Gas-tank opening is under center tail light.

FAST AND HANDSOME, this reworked ’51 Olds has been timed at 135 m.p.h, at Bonneville. A full-race ’53 Cadillac engine is under the hood. Car holds drag-race records for its weight class, which is over two tons. George Cerny of Compton, Calif., filled in the hood to get cleaner lines and painted his car a coppery orange with a gold top.