This scares me. Besides just being a generally bad idea, am I the only one who immediately thinks of the holocaust when I see this?
It’s not quite as scary as this one though. 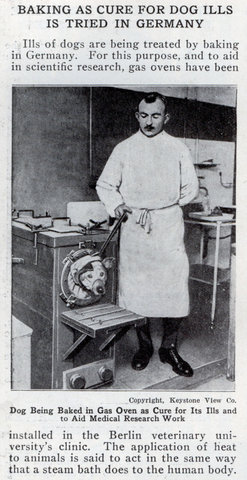 BAKING AS CURE FOR DOG ILLS IS TRIED IN GERMANY
Ills of dogs are being treated by baking in Germany. For this purpose, and to aid in scientific research, gas ovens have been installed in the Berlin veterinary university’s clinic. The application of heat to animals is said to act in the same way that a steam bath does to the human body.