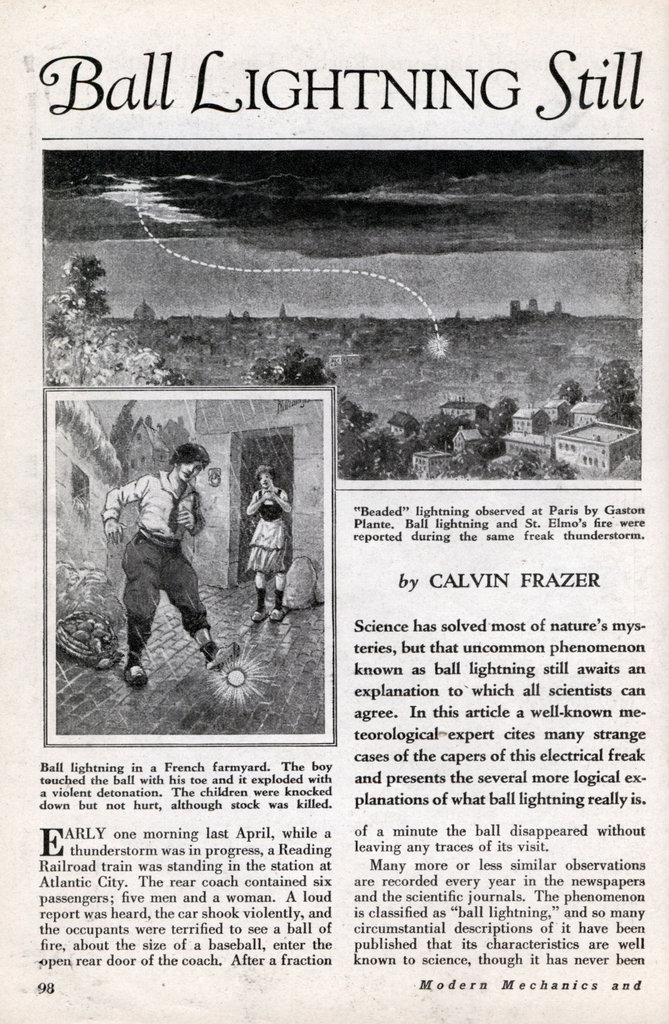 Science has solved most of nature’s mysteries, but that uncommon phenomenon known as ball lightning still awaits an explanation to which all scientists can agree. In this article a well-known meteorological expert cites many strange cases of the capers of this electrical freak and presents the several more logical explanations of what ball lightning really is.

EARLY one morning last April, while a thunderstorm was in progress, a Reading Railroad train was standing in the station at Atlantic City. The rear coach contained six passengers; five men and a woman. A loud report was heard, the car shook violently, and the occupants were terrified to see a ball of fire, about the size of a baseball, enter the open rear door of the coach. After a fraction of a minute the ball disappeared without leaving any traces of its visit.

Many more or less similar observations are recorded every year in the newspapers and the scientific journals. The phenomenon is classified as “ball lightning,” and so many circumstantial descriptions of it have been published that its characteristics are well known to science, though it has never been

satisfactorily explained. A few years ago a German, Dr. Walther Brand, published a book containing a careful analysis of 215 cases, selected, as particularly trustworthy, from a much greater number of published reports. In this country Dr. W. J. Humphreys, of the Weather Bureau, has been collecting reports of ball lightning for several years, and he has lately broadcast an appeal through the newspapers” for additional reports.

Ball lightning occurs during thunderstorms and takes the form of a roundish luminous mass, often red but sometimes of other colors, which may first appear emerging from the base of a cloud, or may form in midair, or, again, may suddenly appear resting on . some terrestrial object. In many cases it enters buildings by way of a window, door, chimney or other opening, large or small. A hissing, humming or fluttering sound often accompanies it. The ball may fall or float through the air, or it may roll along the ground or other surface. In some cases it remains stationary for a time. It remains visible for periods varying from a small fraction of a second to several minutes, and it may disappear silently, or with a light crack, or with a violent explosion. Frequently, but not always, the appearance of the ball is preceded by an ordinary lightning flash.

One of the oddest cases of ball lightning on record occurred many years ago on a farm in France. During a violent thunderstorm two children were standing in the shelter of a stable doorway. From where they stood the farmyard sloped down a distance of twenty yards to a large pond, near which grew a poplar tree. Suddenly a ball of fire the size of an apple appeared at the summit of the tree. It was then seen to descend from branch to branch and to follow the trunk to the ground, along which it rolled very slowly, as if picking its way among the rain puddles, until it reached the stable door. One of the children was bold enough to touch it with his foot, when it instantly exploded with a terrific report. The children were knocked down without sustaining any injury, but of twenty-five head of cattle that were in the stable at the time, eleven were killed!

Another queer case occurred in Italy. A peasant girl, during a thunderstorm, saw a fiery ball as big as two fists roll over the ground to her bare feet. It disappeared under her skirts, which suddenly ballooned out, hoopskirt-fashion, and an instant later emerged from the neck of her bodice. She fell to the ground but was unharmed, and the only mark found on her body was a sort of scratch extending from her right knee to her breast. Her clothing was slightly torn.

In a case reported from Kentucky a boy was standing in a doorway watching a thunderstorm, when a small ball of fire suddenly darted toward him. He turned to run, but the ball lighted on one of his fingers and then vanished. It left no mark, but his finger remained numb for some time. In contrast to these harmless cases, some encounters with ball lightning have proved fatal to human beings, including the famous one that cost the life of Professor Richmann, at St. Petersburg, in 1753. Inspired by the experiments of Benjamin Franklin, this physicist had erected a lightning rod leading into his laboratory and was standing near it during a severe thunderstorm. At the moment a lightning flash occurred, a fiery globe sprang from the rod and struck him on the forehead, killing him instantly.

Ball lightning has been a subject of incessant controversy among scientists for more than half a century and dozens of explanations of it have been proposed though none has yet found general acceptance. Several investigators have supposed that the balls consist of matter heated to incandescence by the electrical discharge of the thunderstorm. When a metal wire is melted by sending a strong electric current -through it, it is sometimes seen to break up for an instant into a number of separate glowing points, like a string of beads, and a streak of lightning occasionally assumes the same appearance. In 1876 both “beaded” lightning and ball lightning were observed during a thunderstorm in Paris. A French physicist, Gaston Plante, was thus led to suggest that ball lightning always begins as a streak of “beaded” lightning, formed by the intense heating of the air along the path of a discharge; the glowing parts of the streak eventually becoming scattered, so that they are seen as separate balls.

Dr. Humphreys, the leading American authority on lightning, believes that many reported cases of ball displays are due to an optical illusion. He says:

“A common form of apparent ball lightning is that in which a brilliant ‘ball’ is said to have hit a certain spot and then bounded away at greater or less speed over the ground, finally going off with a ‘bang.’ The explanation is as follows. Where the lightning hits* there is often a brilliant flashâ€”much more brilliant than the streak itself. This is the ‘ball.’ It dazzles the eye and produces an image that persists for some seconds, nearly always to one side of the center of vision, because one would seldom be looking at the exact spot struck at the moment this happened. Hence, in turning the eye to look directly at the bright glare, the latter itself also turns, being a persistent image on the retina, and no longer an objective phenomenon. But the movement of the eye is irregular, and so the ‘ball’ goes bounding along. In a little while the thunder reaches and more or less startles the observer. That is when the supposed ball ‘explodes.’ ”

An explanation that seems to fit some cases of so-called ball lightning is that the object identified by the observer as a fiery ball is really a brush discharge of electricity, such as occurs in the well-known phenomenon of St. Elmo’s fire, or corposants. Such discharges are often seen in thundery weather at the tips and angles of elevated objects, including lightning-rods, steeples, the ridge poles of houses and the spars of vessels. They also form the bluish “corona” seen at night along electric power lines carrying high-voltage currents.

In the electrostatic field of a thunderstorm a light object floating in the air or blown along the ground by the wind might emit a brush discharge and produce the general appearance of ball lightning. If, while the phenomenon was under observation, a powerful lightning stroke occurred in the vicinity, this would temporarily neutralize the field, the brush would disappear, and the accompanying clap of thunder would be attributed to the “explosion” of the ball.