Mechanix Illustrated
Issue: May, 1954
Posted in: General, Sign of the Times
No Comments on BARBERING, BANK ROBBING AND BARTENDING (May, 1954)

BARBERING, BANK ROBBING AND BARTENDING (May, 1954) 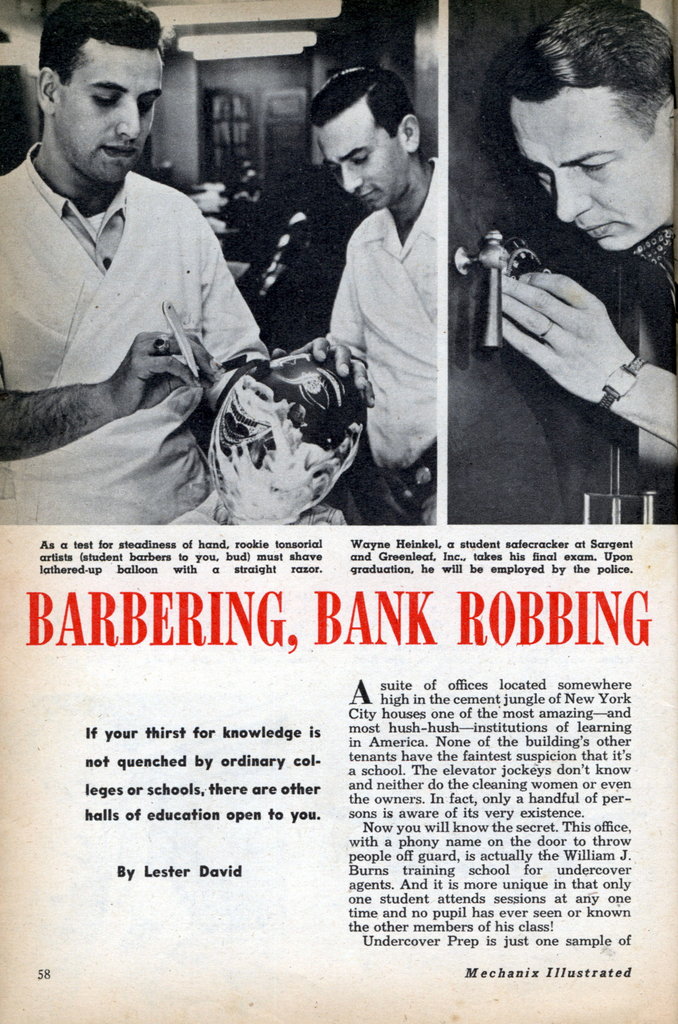 If your thirst for knowledge is not quenched by ordinary colleges or schools, there are other halls of education open to you.

A suite of offices located somewhere high in the cement jungle of New York City houses one of the most amazingâ€”and most hush-hushâ€”institutions of learning in America. None of the building’s other tenants have the faintest suspicion that it’s a school. The elevator jockeys don’t know and neither do the cleaning women or even the owners. In fact, only a handful of persons is aware of its very existence.

Now you will know the secret. This office, with a phony name on the door to throw people off guard, is actually the William J. Burns training school for undercover agents. And it is more unique in that only one student attends sessions at any one time and no pupil has ever seen or known the other members of his class!

Undercover Prep is just one sample of the bewildering variety of off-beat halls of knowledge you will find in this country and elsewhere. Persons thirsting for information above and beyond the liberal arts and the trades and occupations have a wide assortment of odd schools available. Did you know, for example, that there is actually an academy where a bank is robbed as a final exam and a place where the fine art of pocket picking is taught by master craftsmen to eager students?

We shall explore these curious curriculums in a moment. But first, the lowdown on the top secret education of undercover men:

The famed Burns agency, one of the world’s largest, employs two types of investigators. One is the private eye you’ve read and heard about, an agent who works out his case more or less in the open. He reveals his identity readily to banks, business organizations, governmental bureaus and others whenever he finds it necessary to get their cooperation in checking a subject.

The other type, however, operates in complete anonymity. He’s the undercover agent whose value to his home officeâ€” whose very life, in factâ€”depends on how thoroughly he can remain in the shadowy background, face unrevealed at all times. These men, known only to a few Burns officials, never appear at the office, get their assignments by phone and transmit their reports by mail in blank envelopes. Their jobs? To worm their way into gangs of blackmailers, jewel thieves and other lawbreakers, become part of the mobs and thus crack cases from the inside. The penalty for being unmasked is swift and deadly vengeance, gang style.

But undercover men, like anyone else, must be trained for their jobs. Hence the unique school. Howard Winter, in charge of the Burns criminal division, sends a trainee to the place and there he is joined by experts who come one at a time to drill him in all phases of his work. He is taught how to “rope” a suspect, that is, become chummy with a crook and get him to reveal important data. He learns which underworld contacts can provide valuable information and how to reach them. He is warned of the perils to avoid. This goes on intensively for two weeks and finally an agent gets his “diploma”â€”a job in the field.

About that school where the bank gets robbedâ€”it’s the FBI Academy in Quantico, Va., where an exact replica of a bank has been built along one entire wall of a classroom. At the school, rookie G-men are taught the fundamentals of their business and toward the close of the three-month course, FBI instructors stage a thoroughly realistic holdup.

They prepare a complete script then assign all the key roles to G-men who proceed with the robbery while the trainees wait a distance away in a simulated FBI field office. As soon as the robbery is completed and the bandits have fled with the loot, a teller leaps to the phone, calls the office and students rush to the scene. Their job is to solve the case.

Bank robberies, however, aren’t the only “crimes” committed at the FBI school. There are also homicides of every imaginable form, kidnapings, hit-run killings and what-have-you. The victims are always the same, two life-like dummies. One is a pretty brunette called Daisy Mae, the other a gentleman named Oscar. The bodies are left in a room or outdoors, clues are spotted at strategic places and the trainees are told to solve the case.

Odd as all this seems, the bank robbery and murder school are by no means the strangest in the criminal education field. That distinction is reserved for an institution in Warsaw, Poland, whereâ€”believe it or notâ€”pickpockets learn the ABC’s of their profession.

It’s not a gag, either. In Europe, elderly pickpockets who can no longer operate in public set up schools to teach their artistry to newcomers. This information comes from Fred Roner, a Viennese cabaret star now in this country who actually took a four-week course at Warsaw’s Dip University!

Not that Roner wanted the information for dishonest purposes. It seems that he was a card trickster on the stage in Europe but soon found that competition was getting pretty stiff from other magicians. So he hit on the idea of developing a smash specialty, making a card disappear and then reappear again in the wallet of an innocent bystander. But to do the trick, Roner had to learn how to lift the wallet from the person. Hence the need to study pocket picking.

He had heard vaguely about these schools for dips, so he made extensive inquiries and finally got the address of an institute in Warsaw. He had his agent get him a booking in,the city, then armed with an introduction, paid a visit to the school.

It was run, he recalls, by an ancient man in an equally ancient tenement who combined lectures with practical demonstrations on a dressed-up department store dummy which he utilized as a teaching aid. For weeks he drilled Roner in the fine points of the businessâ€”how to detect the suspicious bulge of a wallet, which fingers to use, how to dip without being felt, how to unclasp a necklace with two fingers.

“He was an excellent teacher,” Roner recalls. “That dummy was wired for sound. Whenever I got the least bit clumsy, a bell rang. It taught me how to filch with the utmost care.”

And Roner learned well. Now he’s an outstanding stage and night club performer, billed as “the world’s greatest pickpocket.” In addition, he lectures extensively before business and police groups, explaining important facts on self-protection from dips.

You can’t learn how to be a pickpocket in this country, but you can study to be everything from a bartender and meat-cutter to a circus acrobat and embalmer. You can even enroll your pooch, as well as yourself, at an institution called Canine U. in Queens, New York City. It’s a school for dogs and their masters, complete with homework, report cards and diplomas.

Canine U. will give your Rover a B.B. (Bachelor of Bones) degree in 12 easy lessons. After the undergraduate degree is attained, the pup may return for an advanced I.A.S.D. (I Am a Superior Dog) certificate. And for mutts interested in professional work, the school offers training for stage and screen. Already more than 50 of the school’s grads have appeared on television.

For years husbands have been driven to distraction and their wives to tears because of the family car. Husbands, it seems, just cannot teach wives to drive without blowing up. Now, at long last, it’s happenedâ€”a class which teaches hubbies how to teach the gals to drive! It all started when many of the women who had enrolled in the adult education driving class at an East Meadow, L. I., school complained bitterly to David Lubell, their teacher. Husbands were displaying frenzied outbursts of temper at their “tiny little mistakes” during home driving sessions.

So Lubell organized the class for husbands. It’s working out fine, tooâ€”saving lots of marriages, and cars.

Most of the unusual educational institutions are strictly on the legitimate side. There is, however, one branch of learning prospering mightily these days which is as phony as a wooden nickel and a lot more dangerous. These are the diploma mills which hand out “doctor’s” degrees by the thousands to quack psychologists, who then proceed to give ridiculous advice to gullible folks in trouble. Dr. Fillmore H. Sanford, executive secretary of the American Psychological Association, says that the spurious products of these fake academies rake in a whopping $375,000,000 annually in patients’ fees.

For a price, and almost no study, the schools hand out beautifully engraved diplomas in bio-psychology, astral physics, metaphysiology and other high-sounding scientific buncombe.

For the payoff in this type of academic lore you have to go to Europe. Right now the latest occultist fad to sweep the continent is something called “radio-esthesy,” a form of water divining. Its practitioners replace the diviner’s classic rod with a pendulum and claim they can diagnose illnesses by swinging the gadget over a patient’s body.

Thousands of sick persons are consulting the radio-esthetists and, as you would imagine, “medical schools” have sprung up to teach the bizarre art to newcomers. The institutes are flourishing despite vigorous protests by bona-fide medics.

But back to the legitimate centers of odd knowledge. Two of the quaintest are the Parker School of Personality and the Southeastern University Finishing School, both in Washington and both dedicated to the objective of teaching capital bigwigs how to avoid pulling classic boners in high Washington society. Students include bright young congressmen fresh from the corn country, foreign diplomats and even generals, one of whom told his instructor that the war had brutalized him and he wanted to learn how to fit into peacetime society.

So at the school you get the spectacle of an important political figure, newly arrived in the capital, meekly learning how to use the proper fork at a dinner party; or a dignified colonel being drilled over and over in the fine art of making introductions; or a judge nodding sagely as the instructor tells him it’s deucedly bad form to leave a soiree before the departure of the highest ranking guest.

Yes, there are schools that teach manicuring, deep-sea diving, tea-leaf reading and almost everything from aerodynamics to xylophone playing. Boxing and wrestling? Sure, but did you know that the Strategic Air Command now instructs its men in the sport known as “karate”. It’s a form of wrestling that’s rougher on its victims than judo or jiu-jitsu. Experts can kill a horse with a single blow and it was only recently that a Japanese exponent amazed Charles Yerkow, U. S. judo authority, by cracking five one-inch boards with one hard smash of a bare fist.

And have the final kicker. Bergen County, N. J., had a rash of rapid childbirths, with lusty infants making their debuts in buses, trains, doorsteps and even stores. Police were called so frequently to assist mothers that the Bergen County Police Chiefs Association decided to do something about it. The association talked with the local medical society and now cops are taking a special course in how to deliver babies in an emergency. Better to learn it there than on the streets!