I’m really not sure what this has to do with Apaches, but damn! Spikes and acid? 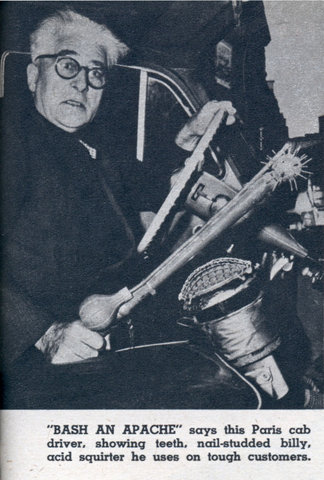 Update:
In the comments Stannous explains the term Apache. It’s actually much more interesting than the picture:

Not the Indians- French thugs:
By 1874 Paris was swarming with vagabonds. Consisting mostly of juvenile delinquents, these ten thousand or so ruffians would evolve into a new generation of street-fighter, banding into a gang which came to be known as the Apache.
The word “Apache” (pronounced “ah – PAHASH”) is a Parisian term used to describe the French street gangs of the early 1900s. The era’s local newspapers often described the violence perpetrated by these gangs as synonymous with the ferocity of Apache Indians in battle.

The typical French Apache was a young, lower-class, pimp-type vagabond with connections to the underworld. An interesting by-product of this underground culture was “Apache dancing” — a type of “street swing” which simulated actions and movements of urban violence, and actually contained combat techniques particular to the typical Apache’s repertoire. This dance was reportedly so violent that participants sometimes died of injuries sustained from being thrown across bars, onto tables, or after being struck with mistimed blows.

Understandably, this form of dancing was confined to the Apache culture, although for a short time it did attract the attention of the upper class, who came to appreciate a toned-down version which was said to be somewhat similar to the tango.

The Apaches most prominently focused on their own form of street combat however. Crude and unscrupulous, yet highly effective, “French Apache street fighting” emphasised the use of elementary street kicks, hand strikes, head-butts, throws, and an assortment of weapons both standard and improvised which included knuckle dusters, knives, razors, scarves, bodkins,,jackets, hats, the Apache gun and even sheep bones!