Modern Mechanix
Issue: May, 1934
Posted in: Ahead of its time
1 Comment on Batteries of Robots Scoop Power From Sea With Shovels (May, 1934)

Batteries of Robots Scoop Power From Sea With Shovels (May, 1934) 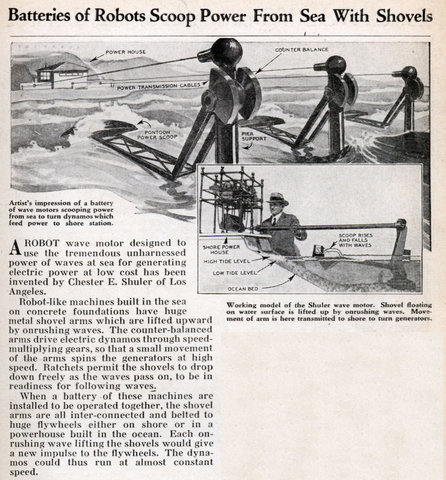 Batteries of Robots Scoop Power From Sea With Shovels

A ROBOT wave motor designed to use the tremendous unharnessed power of waves at sea for generating eleetric power at low cost has been invented by Chester E. Shuler of Los Angeles.

Robot-like machines built in the sea on concrete foundations have huge metal shovel arms which are lifted upward by onrushing waves. The counter-balanced arms drive electric dynamos through speed-multiplying gears, so that a small movement of the arms spins the generators at high speed. Ratchets permit the shovels to drop down freely as the waves pass on, to be in readiness for following waves.

When a battery of these machines are installed to be operated together, the shovel arms are all inter-connected and belted to huge flywheels either on shore or in a powerhouse built in the ocean. Each on-rushing wave lifting the shovels would give a new impulse to the flywheels. The dynamos could thus run at almost constant speed.