Mechanix Illustrated
Issue: Aug, 1938
Posted in: Ahead of its time
1 Comment on Battery-Operated Hearing Aid Is Easily Concealed (Aug, 1938)

Wow, that is pretty tiny! 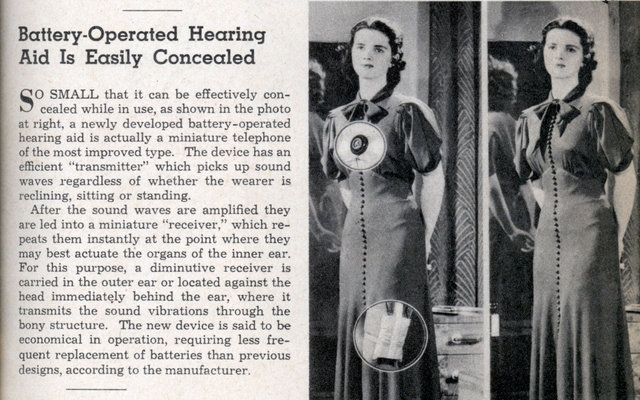 SO SMALL that it can be effectively concealed while in use, as shown in the photo at right, a newly developed battery-operated hearing aid is actually a miniature telephone of the most improved type. The device has an efficient “transmitter” which picks up sound waves regardless of whether the wearer is reclining, sitting or standing.

After the sound waves are amplified they are led into a miniature “receiver,” which repeats them instantly at the point where they may best actuate the organs of the inner ear. For this purpose, a diminutive receiver is carried in the outer ear or located against the head immediately behind the ear, where it transmits the sound vibrations through the bony structure. The new device is said to be economical in operation, requiring less frequent replacement of batteries than previous designs, according to the manufacturer.