Mechanix Illustrated
Issue: Jan, 1952
Posted in: Ahead of its time, Television, War
6 Comments on BATTLEVISION (Jan, 1952) 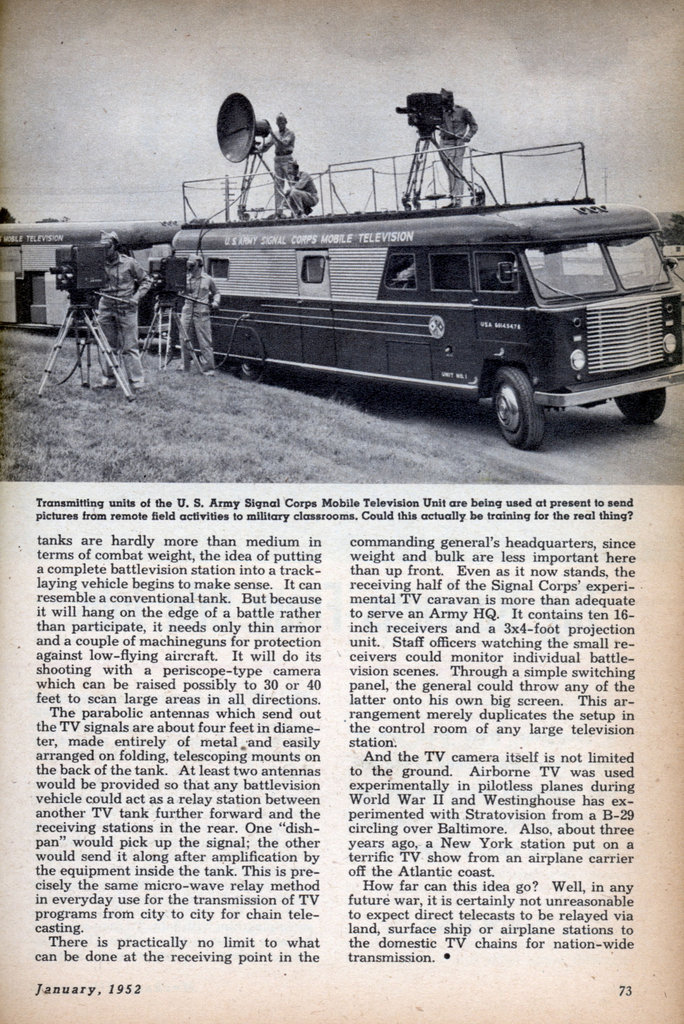 Why Don’t We Have… BATTLEVISION

Tomorrow’s generals may be able to tune in on the battlefield courtesy of television, relayed to headquarters by battle-going TV Seeing Eyes.

THIS is no fantastic rambling of science-fiction!

If there is another war, it will provide definite opportunities for the use of modern television miracles.

TV set owners now enjoy better views of athletic contests than do most people right on the scene. Powerful telephoto lenses reach across playing fields and give spectacular close-ups of a runner dashing for the goal line or of a fielder snatching a high fly. Wide-angle lenses broaden the view and produce panoramic effects of great sweep.

“Why,” military people ask, “can’t we do exactly the same thing on battlefields that the commercial TV stations are doing on football fields? Our game is rougher and is played for keeps but that’s just why the head coachâ€”the commander of an army in combatâ€”should be able to follow the moves of the members of his team. If he can see what’s going on while it’s going on, he won’t have to wait for reports from his subordinate commanders. Why can’t mobile TV vehicles be assigned to combat units just as conventional communication trucks are, so that the commander can instantly see the fighting in any particular area?”

In other words, why don’t we have battlevision?

If this proposal had been made a few years ago it would have been dismissed as wacky. Today, however, battlevision already exists in technical form and needs only some good engineering to make it practical in tactical form. Only recently, RCA delivered to the Signal Corps an elaborate four-vehicle television caravan designed primarily to explore the possibilities of TV for army field instruction.

Each truck is a ten-ton, six-wheel job. Two are used for transmitting, two for receiving. One truck of each pair carries only electric generators, which are very large because they must supply power for studio-type floodlights as well as for the TV equipment itself. Since the latter alone uses comparatively little power and the battle cameras would operate only in daylight, the overall weight of tactical TV vehicles can readily be reduced by tons. Through tight miniaturization of components, it shouldn’t be very difficult to produce a complete TV transmitter that takes only a little more juice than presently is required for a standard tank radio installation. The separate power generator van could then be discarded and the TV unit operated off the storage battery-charging generator combination of the vehicle’s own engine.

When you remember that 20 and 30-ton tanks are hardly more than medium in terms of combat weight, the idea of putting a complete battle vision station into a track -laying vehicle begins to make sense. It can resemble a conventional tank. But because it will hang on the edge of a battle rather than participate, it needs only thin armor and a couple of machineguns for protection against low-flying aircraft. It will do its shooting with a periscope-type camera which can be raised possibly to 30 or 40 feet to scan large areas in all directions.

The parabolic antennas which send out the TV signals are about four feet in diameter, made entirely of metal and easily arranged on folding, telescoping mounts on the back of the tank. At least two antennas would be provided so that any battlevision vehicle could act as a relay station between another TV tank further forward and the receiving stations in the rear. One “dish-pan” would pick up the signal; the other would send it along after amplification by the equipment inside the tank. This is precisely the same micro-wave relay method in everyday use for the transmission of TV programs from city to city for chain telecasting.

There is practically no limit to what can be done at the receiving point in the commanding general’s headquarters, since weight and bulk are less important here than up front. Even as it now stands, the receiving half of the Signal Corps’ experimental TV caravan is more than adequate to serve an Army HQ. It contains ten 16-inch receivers and a 3×4-foot projection unit. Staff officers watching the small receivers could monitor individual battle-vision scenes. Through a simple switching panel, the general could throw any of the latter onto his own big screen. This arrangement merely duplicates the setup in the control room of any large television station.

And the TV camera itself is not limited to the ground. Airborne TV was used experimentally in pilotless planes during World War II and Westinghouse has experimented with Stratovision from a B-29 circling over Baltimore. Also, about three years ago, a New York station put on a terrific TV show from an airplane carrier off the Atlantic coast.

How far can this idea go? Well, in any future war, it is certainly not unreasonable to expect direct telecasts to be relayed via land, surface ship or airplane stations to the domestic TV chains for nation-wide transmission.