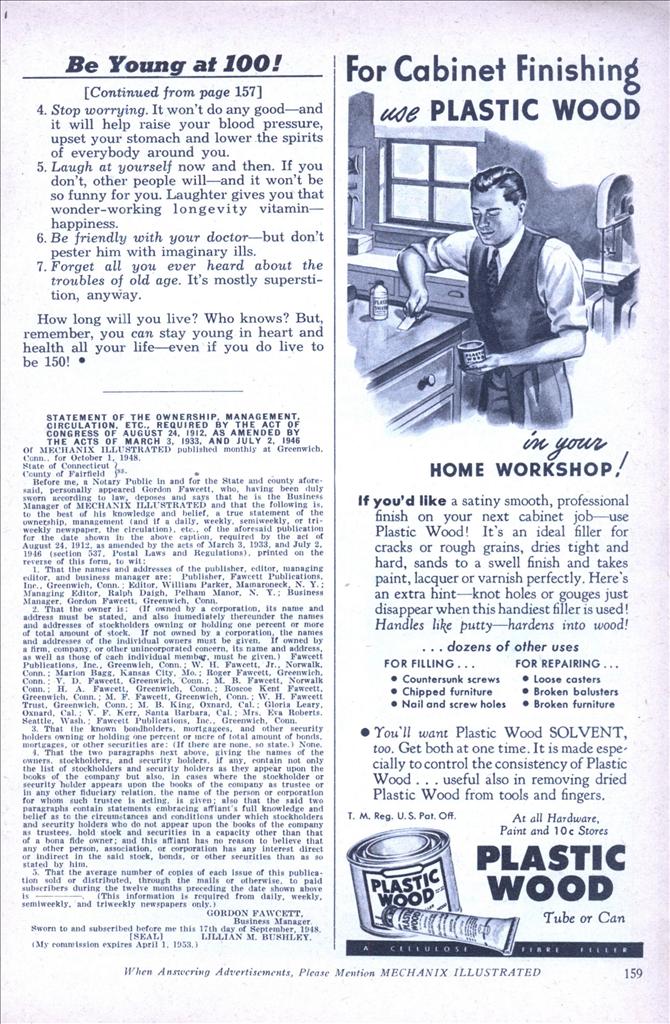 Till the day you die you’ll probably keep thinking you can always squeeze out at least one more year from those old bones of yours. And ever since 1848 when the average American dropped dead before 40, we have indeed squeezed out extra years until today our national life span has stretched to 67.

That’s still far short of the century mark. Yet some medical experts now say that not only should you live to be 100 but keep breezing right along, hale and hearty, for another half-century.

Living to be 100 is kid stuff, according to Dr. Edward L. Bortz of Philadelphia, a former president of the American Medical Association. A dog is full-grown at two years, but lives, on an average, to be 12; a horse, mature at four, lives to be 25.

“A human being should have a life expectancy of 150 years.”

Two leading scientists, Dr. Theodore L. Klumpp, Winthrop Chemical Company president, and Dr. Maurice L. Tainter, Sterling-Winthrop Research Institute director, back up Dr. Bortz in his belief that you should live more than twice as long as current life-expectancy tables say you will.

“The success of our efforts to prolong existence to this supposed natural life span depends upon our ability to maintain the lifeline of blood supply to the body tissues,” Dr. Klumpp says. “Few die from old age; they die prematurely from degenerative diseases.”

A new science called Geriatrics seeks to combat these diseases and make you active and productive all your life.

Dr. V. Korenchevsky, of the Gerontological Research Unit at Oxford University, which is studying old age and its effects, thinks that the human span can be extended to 112 or even beyond. But he feels that the main aim should be to make old age firmer and healthier, not merely longer â€”in other words, “to add life to years, not just years to life.”

Life begins at 70, in the Geriatric Clinic of Boston’s Peter Bent Brigham Hospital.

“We tend to assume that after 65 a person loses his usefulness and becomes a second-rate citizen,” the clinic’s officials state. “This is not so. Old age should not bring the depression it does.”

Recently a conference of medical specialists and surgeons at the DeCourcy Clinic in Cincinnati concluded that you can keep your vigor despite the advancing years. Those years alone won’t bring you old-age troubles, the doctors found. If you think you have to lose your pep or start falling apart from senile decay just because you’re getting old, you’re suffering from a “time neurosis.”

“Every human tissue is endowed with potential immortality,” the doctors decided, “when adequately provided with food factors, oxygen and suitable warmth, and when removal of wastes is carefully effected. Time has no effect on human tissues maintained under such conditionsâ€” or, indeed, on human tissues under any conditions. . . .

“Belief in the effects of time tends to reduce ambition. Therefore, expectations and endeavors are curtailed. All those who develop a time neurosis subscribe to the prevalent superstition that time is in some way a poison exerting a mysterious, cumulative action.

“The obsession itself may be the cause of definitely premature aging. Confidence and hope are diminished; continual worry decreases efficiency and increases nervousness and irritability. Life assumes a somber hue. Imaginary symptoms are noted with increasing frequency. The mind or the heart may seem to be failing. . . .

“When a time neurosis is treated successfully, the patient becomes younger than at the time he entered your office.”

The chances for living to be 100â€” and liking itâ€”are far better today than they ever have been before. If you were a woman, those chances would be even finer, since there are four times as many women centenarians as there are men.

One of these long-living ladies was born in Belorussia during Napoleon’s Russian campaign. Her name is Maria Nikolaevna Kuzmich, and she is still enjoying an active life in her village, Ostrovschina Polotzk. In all her 135 years of life she has never been ill.

In this country “Uncle Jim” Wilson, a Negro, of Vidalia, Georgia, lived to be 120. Four years before his death, in December, 1945, Uncle Jim walked into county welfare headquarters and asked if he qualified for an old-age pension. The U.S. Census Bureau checked and double-checked, and finally verified his birthdateâ€”May 15, 1825. Uncle Jim was born in slave quarters in southeastern Georgia, not too far from his home at death, 120 years later.

On the other hand, Uriah Stohler, who passed his 104th birthday last year in Kleinfeltersville, Pa., swore off meat entirely at an early age, and recommended only one meal a day for long life.

But these venerable characters are still in short pants compared to the mother of Ahmah Gaga Singh, who claims to be 112 himself. He states authoritatively that she is still living in Nepal, India, and is just 160. His grandparents, he reports sorrowfully, are no longer living.

James M. Lurvey, a boy of 100, in Goffs Falls, N. H., attributed his longevity to sturdy ancestors, big breakfasts and morning coffee “with a little stick of whiskey.”

On his 100th birthday last December, Lurvey admitted: “I’d like to have some brandy in my morning coffee instead of whiskey, but it’s a bit too high for my pocketbook.”

Captain Dennis Tormey, an ex-tug and coal-boat skipper, who celebrated his own centennial on Staten Island this year, openly sneers at the “live-moderately” faction of centenarians.

“When I went to sea, I drank hard liquor,” he proclaimed on his birthday. “I never took good care of myself and I never expected to live to be 100 years.”

On one point, virtually all centenarians and medical authorities are in complete agreementâ€”the lazy life is a peril for the older folks.

Dr. Clarence A. Neymann, Associate Professor of Psychiatry in the Northwestern University Medical School, recently warned anyone who has retired not to give up all activities. If you strive to be blissfully idle, you may have to reckon with senile dementia, a condition he described as a “gradual narrowing of the mental horizon, with interest in the outside world giving way to preoccupation with the immediate surroundings, a disregard of today’s happenings in favor of those of yesteryear, and eventually the confining of interest to the primordial stimuli of food, sleep, warmth and other bodily needsâ€”a childlike state.”

Miss Florence Dolph, 101, of Dunmore, Pa., is an ardent subscriber to Dr. Neymann’s beliefs. By way of celebrating her 101st birthday last year, she started the festivities by sliding down the banisterâ€”as is her custom every birthday. In answer to a newspaperman’s query about her technique, she pointed out heatedly that she slides astride the banisterâ€”not in the effete sidesaddle manner.

A certain similar pattern of living runs through the statements of most centenarians who try to arrive at the reasons for their longevity. Most, for example, feel that strong drink has assisted them materially in turning their personal century.

The same Dr. Bortz who thinks that we should all live to 150 calls whiskey a helpful tonic to the agingâ€””a lift to the spirits and soothing to the jangled nerves.”

“Whiskey,” he adds, “is certainly one of the best sedatives when used in adequate quantity.” It is, he sums up, probably the most useful aid a physician can enlist in treating elderly patients.

A well-balanced diet is another help in hitting a hundred. Gereaud Van Dyne, of Rochester, N. Y., attributes his healthy 103 years of life to good food, well prepared. His cook? None other than Gereaud Van Dyne himself.

“I feel younger as the years go by,” he says happily.

On his 100th birthday, Edmund Welden, of Valley Falls, N. Y., observed that he was thinking of getting married when he reaches 110. “I probably would have died when I was 50 if I’d been a married man,” he added.

But the advantages of single blessedness throughout life are strongly questioned by Pundit Mahangoo, of Georgetown, British Guiana, who celebrated his 106th birthday by getting married for the third time.

Another point that comes up with any examination of the habits of centenarians isâ€” Watch Your Step! Countless centenarians who were “never sick a day in their lives” died suddenly after fallsâ€”usually involving a broken or injured hip.

A Mr. J. C. Bee-Mason, a British bee expert, says authoritatively that anyone can live to be 100 by letting as many bees as possible sting him as the years go by. This is the procedure confidently followed by Mr. Bee-Mason, who has not yet, however, become a centenarian himself. Before rushing out to follow his advice, it might be a good idea to see whether he finishes that hundred race.

But one of the most unique, and tasty, recipes for living to be 100 is provided by Mrs. Susan Stewart, of Saxonburg, Pa., who celebrated her 101st birthday early in 1948. Mrs. Stewart recommends doughnutsâ€”after they’ve been properly dunked, of course.

“I’ve dunked doughnuts by candlelight, by oil lamp, and by electricity,” she reminisced on her recent birthday.

Many of the oldtimers we’ve mentioned have followed their own pet recipe for reaching 100. They’re often at odds about just how they did it. Here are a few tips, though, that may help you stretch out the years toward that happy hundred:

1. Go light on your diet when you find it heavy going on the scales.

2. Drink moderately and only to relax and be sociableâ€”not excessively nor to drown your sorrows.

4. Stop worrying. It won’t do any goodâ€”and it will help raise your blood pressure, upset your stomach and lower the spirits of everybody around you.

5. Laugh at yourself now and then. If you don’t, other people willâ€”and it won’t be so funny for you. Laughter gives you that wonder-working longevity vitaminâ€” happiness.

6. Be friendly with your doctorâ€”but don’t pester him with imaginary ills.

7. Forget all you ever heard about the troubles of old age. It’s mostly superstition, anyway.

How long will you live? Who knows? But, remember, you can stay young in heart and health all your lifeâ€”even if you do live to be 150! â€¢