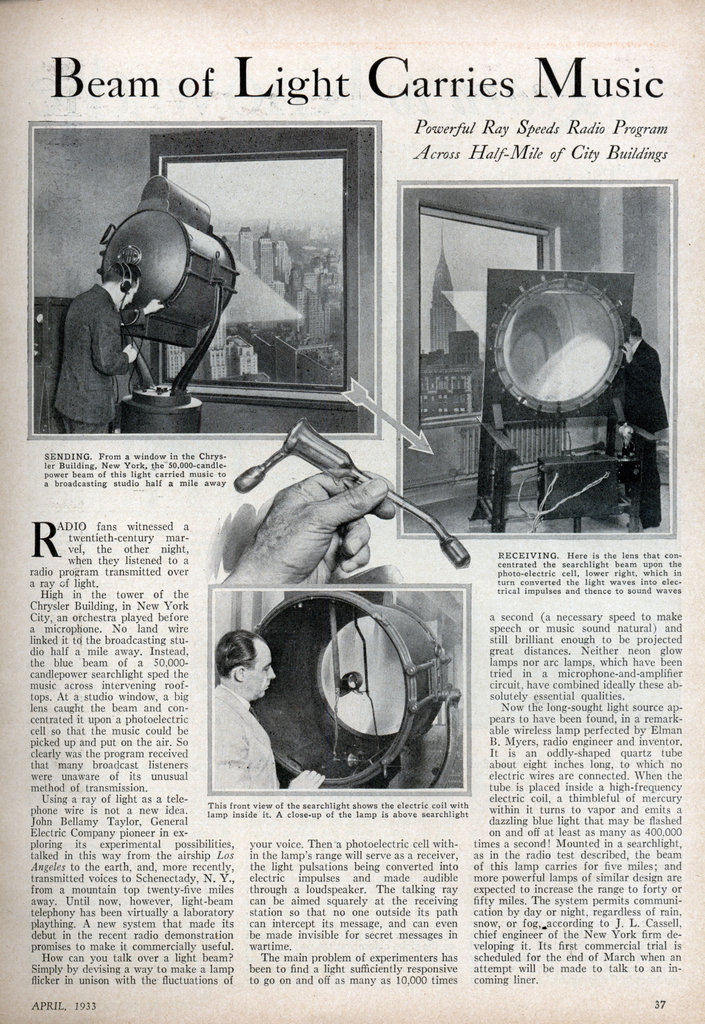 Powerful Ray Speeds Radio Program Across Half-Mile of City Buildings RADIO fans witnessed a twentieth-century marvel, the other night, when they listened to a radio program transmitted over a ray of light.

High in the tower of the Chrysler Building, in New York City, an orchestra played before a microphone. No land wire linked it to the broadcasting studio half a mile away. Instead, the blue beam of a 50.000-candlepower searchlight sped the music across intervening rooftops. At a studio window, a big lens caught the beam and concentrated it upon a photoelectric cell so that the music could be picked up and put on the air. So clearly was the program received that many broadcast listeners were unaware of its unusual method of transmission.

Using a ray of light as a telephone wire is not a new idea. John Bellamy Taylor, General Electric Company pioneer in exploring its experimental possibilities, talked in this way from the airship Los Angeles to the earth, and, more recently, transmitted voices to Schenectady, N. Y., from a mountain top twenty-five miles away. Until now, however, light-beam telephony has been virtually a laboratory plaything. A new system that made its debut in the recent radio demonstration promises to make it commercially useful. How can you talk over a light beam? Simply by devising a way to make a lamp flicker in unison with the fluctuations of your voice. Then a photoelectric cell within the lamp’s range will serve as a receiver, the light pulsations being converted into electric impulses and made audible through a loudspeaker. The talking ray can be aimed squarely at the receiving station so that no one outside its path can intercept its message, and can even be made invisible for secret messages in wartime.

The main problem of experimenters has been to find a light sufficiently responsive to go on and off as many as 10,000 times a second (a necessary speed to make speech or music sound natural) and still brilliant enough to be projected great distances. Neither neon glow lamps nor arc lamps, which have been tried in a microphone-and-amplifier circuit, have combined ideally these absolutely essential qualities.

Now the long-sought light source appears to have been found, in a remarkable wireless lamp perfected by Elman B. Myers, radio engineer and inventor. It is an oddly-shaped quartz tube about eight inches long, to which no electric wires are connected. When the tube is placed inside a high-frequency electric coil, a thimbleful of mercury within it turns to vapor and emits a dazzling blue light that may be flashed on and off at least as many as 400.000 times a second! Mounted in a searchlight, as in the radio test described, the beam of this lamp carries for five miles; and more powerful lamps of similar design are expected to increase the range to forty or fifty miles. The system permits communication by day or night, regardless of rain, snow, or fog, according to J. L. Cassell, chief engineer of the New York firm developing it. Its first commercial trial is scheduled for the end of March when an attempt will be made to talk to an incoming liner.