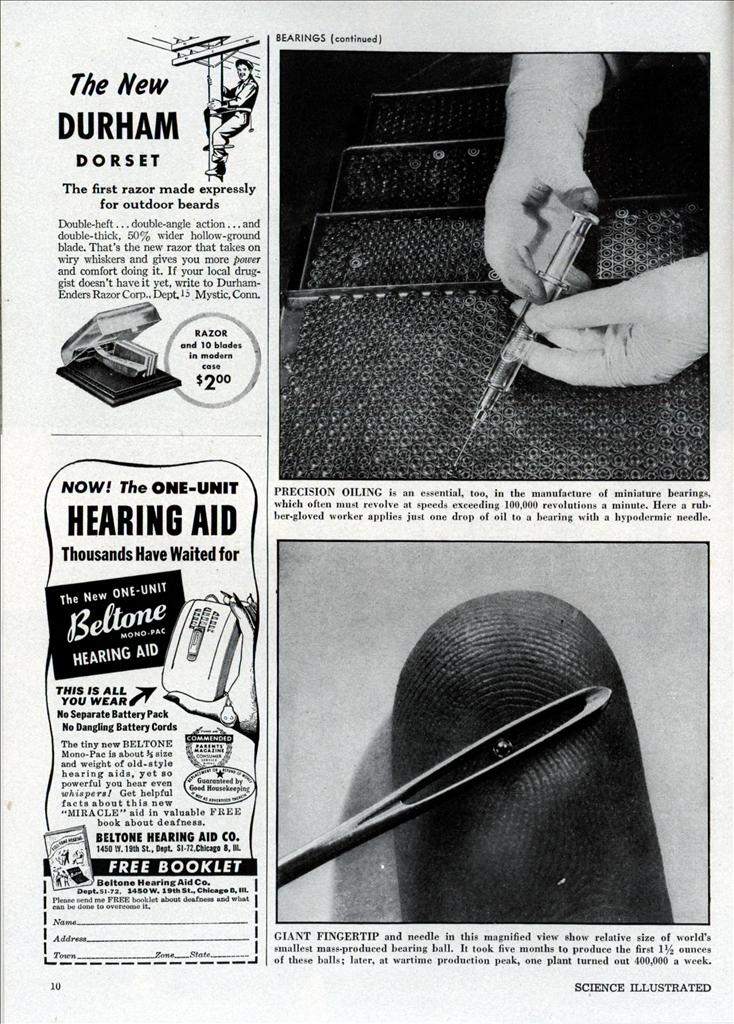 BIG AND LITTLE of precision-made steel balls that smooth the path of modern industry and transportation. The big sphere, six inches in diameter, will go into a mammoth hot-oil valve in a refinery. The smaller one (it’s in the eye of the needle) has a diameter of one millimeter. With two others of the same size it makes a bearing that is a vital part of the Norden bombsight.

LIKE PEAS IN A POT, precision-ground steel balls are dipped in a cleansing fluid before being assembled in bearings. Balls alone are not “bearings”; latter also include rings or “races.”

PERFECT BALANCE is essential in the bearing shown here under test. When the spindle is placed in its socket, the bearing must turn under the weight of a piece of wire the size of a pin.

GIANT RING or raceway is lowered in assembly of a tapered roller bearing of the type used in huge turbines and other industrial machinery. Whether as large as a night-club dance floor or as small as the head of a pin, a friction-reducing bearing performs a vital function in the machine of which it is a part.

TWO MANPOWER pulls a 400-ton steam locomotive from a dead stop on level track, thanks to roller bearings on the axles of the iron horse. Use of such bearings on locomotive axles has cut down starting resistance by 88 percent in comparison with old-fashioned plain bearings. An interesting new use for friction- NOT CHAMPAGNE BUBBLES, but tiny bearing balls dropping into a glass. A tablespoon holds 70,000 of them, and it takes 110,000 to weigh a pound. They are used in the Norden bombsight, where accuracy is so important that an error of 1/10,000 of an inch would cause a bomb to strike hundreds of yards off target.

reducing bearings has been reported from Los Angeles, where a building is being equipped to roll six inches in any direction when an earthquake puts the structure under stress. Each of the bearings employed in the earthquake-resisting building has an assembly weighing 600 pounds and supports a 250,000-pound load.

PRECISION OILING is an essential, too, in the manufacture of miniature bearings, which often must revolve at speeds exceeding 100,066 revolutions a minute. Here a rubber-gloved worker applies just one drop of oil to a hearing with a hypodermic needle.

GIANT FINGERTIP and needle in this magnified view show relative size of world’s smallest mass-produced bearing ball. It took five months to produce the first 1-1/2 ounces of these balls; later, at wartime production peak, one plant turned out 400,000 a week.