Popular Mechanics
Issue: Dec, 1924
Posted in: Crime and Police, Sign of the Times
No Comments on Beating the Burglar at His Own Game (Dec, 1924)

This is a really entertaining article about the arms race between safe-crackers and the safe-makers/users. 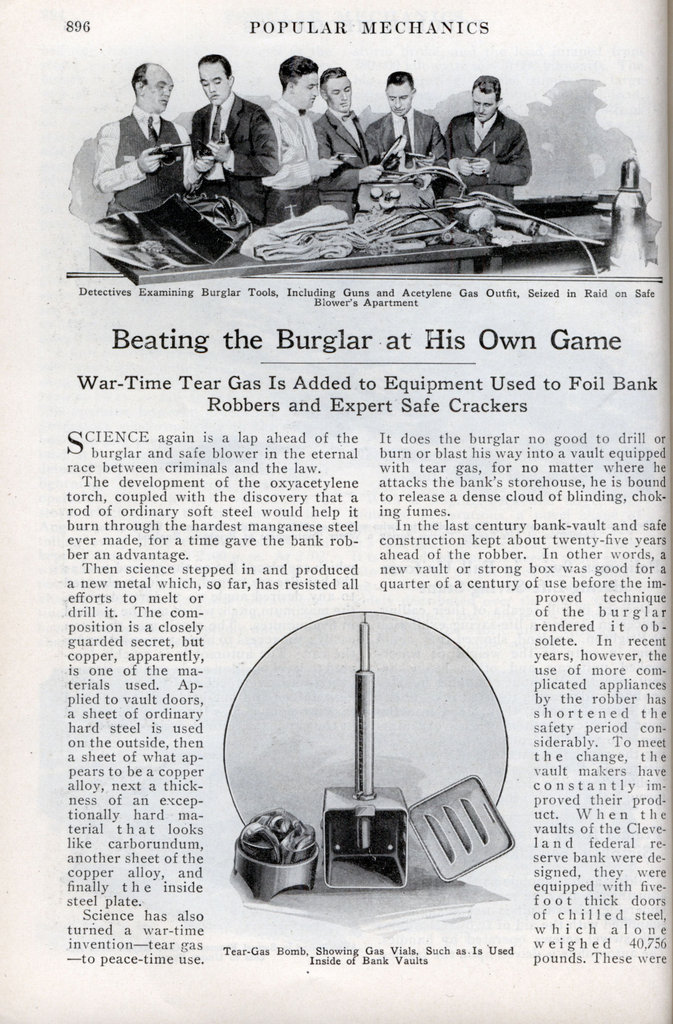 Beating the Burglar at His Own Game

SCIENCE again is a lap ahead of the burglar and safe blower in the eternal race between criminals and the law.

The development of the oxyacetylene torch, coupled with the discovery that a rod of ordinary soft steel would help it burn through the hardest manganese steel ever made, for a time gave the bank robber an advantage.

Then science stepped in and produced a new metal which, so far, has resisted all efforts to melt or drill it. The composition is a closely guarded secret, but copper, apparently, is one of the materials used. Applied to vault doors, a sheet of ordinary hard steel is used on the outside, then a sheet of what appears to be a copper alloy, next a thickness of an exceptionally hard material that looks like carborundum, another sheet of the copper alloy, and finally the inside steel plate.

Science has also turned a war-time inventionâ€”tear gas- to peace-time use.

It does the burglar no good to drill or burn or blast his way into a vault equipped with tear gas, for no matter where he attacks the bank’s storehouse, he is bound to release a dense cloud of blinding, choking fumes. In the last century bank-vault and safe construction kept about twenty-five years ahead of the robber. In other words, a new vault or strong box was good for a quarter of a century of use before the improved technique of the burglar rendered it obsolete. In recent years, however, the use of more complicated appliances by the robber has shortened the safety period considerably. To meet the change, the vault makers have constantly improved their product. When the vaults of the Cleveland federal reserve bank were designed, they were equipped with five-foot thick doors of chilled steel, which alone weighed 40,756 pounds. These were the largest made up to that time, but five years later the New York federal reserve vaults’ doors were made just twice as thickâ€”ten feet of the hardest steel known.

For a long- time it was believed that the ball type of manganese safe was impregnable. It was drill-proof, and its peculiar type of door construction offered no chance to pour in liquid explosive, while the offset combination locks resisted the sledge-hammer cracksman who knocks off the dial and punches out the tumblers with a steel rod.

Then came the development of the portable gas torch and the fluxing rod. The rod is just a bar of soft steel. Held with its point against the hard steel, just where the flame is applied, this rod oxidizes with tremendous rapidity and an irresistible temperature is developed. Even then the makers of the round chest believed it was safe, because, they said, any attempt to burn through it would be useless, as the heat would destroy the contents, and so give the burglar nothing for his pains. But a clever gang of robbers melted a tiny hole through the three-inch wall of a safe, and then inserted a funnel and filled the inside with water. Then they burned out a plug, leaving a hole big enough to insert the arm, and fished up the contents through the water.

Now bankers are wheeling their manganese safes into a vault equipped with tear gas. The inside of the door is a maze of steel wires, running over small brass pulleys and held at tension by strong springs. The wires cross every section of the door, and even crisscross over the combination box, to guard against any attempt to knock off the dial and punch out the tumblers. If the wire is broken at any place, the tension is released, two burglar-proof bolts shoot home, and one of them trips a trigger, which releases a spring-driven plunger in the tear-gas container, breaking the glass vials and releasing dense clouds of the unbearable gases.

The introduction of gas is only one of the many changes made in modern vaults. Doors in the bigger vaults are no longer made with stepped or tongue-and-grooved edges. Instead they are plain cones, which plug the opening like the stopper of a bottle. Tests revealed that explosive’s poured into the cracks of a stepped door would exert tremendous leverage against the sides of the steps, forcing the door out, while with the plain cone type, the blast can only blow out into the room or into the vault, without tearing off the door. While new burglar-proof locks, tear-gas bombs and special construction are being extended to protect from burglars, bankers still put much of their trust in electrical alarm systems, and some of the latest models are so complete as to be virtually proof against any sort of attack. The electrical alarms, like those used on stores and residences, are divided into two classes, local alarms with gongs on the building to attract passers-by and police, and central-office alarms, in which a silent signal is flashed to headquarters of the burglar-protection company, which dispatches armed guards to the scene.