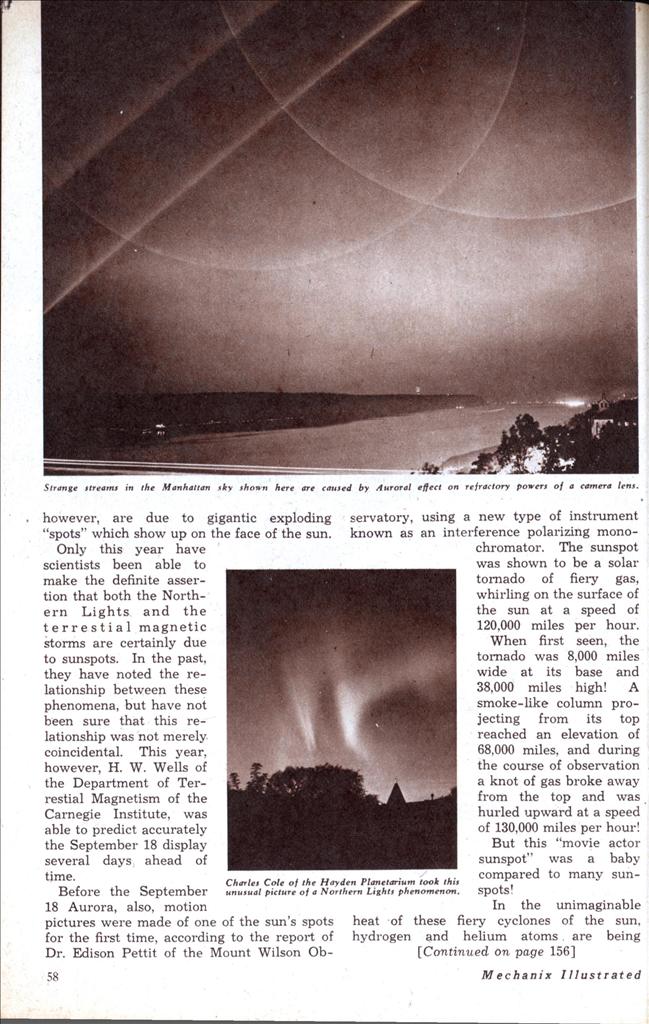 But since the advent of radio and long-range telegraphic and cable circuits, it has been noted that the Northern Lights are always associated with tremendous magnetic storms which play havoc with communications systems. And this discovery has spurred our scientists to a closer study of the stratospheric fireworks, until, now, we are beginning to learn something other than myth about them..

A few years ago, a magnetic storm accompanied by an unusual display of Northern Lights usually meant a complete breakdown of radio and telegraphic communication for several hours. Today, due to new facts which study of the phenomena have yielded and new methods of “dodging” electronic pyrotechnics developed by engineers, an outburst of the Aurora is not nearly so serious a threat to the vital flow of intelligence among humans.

The terrific display of Northern Lights and its accompanying magnetic storm on September 18 of this year—the most intense ever recorded in the United States—found communications engineers prepared. For the first time during such a storm, as a result, they were able to maintain radio communications, even with Europe. The tricks they used in keeping information channels open were almost as interesting as the latest explanations of the phenomenon of Aurora.

In the first place, it should be made plain that the Aurora and the magnetic storms on the earth’s surface are merely related phenomena, and not the same thing. Both, however, are due to gigantic exploding “spots” which show up on the face of the sun.

Only this year have scientists been able to make the definite assertion that both the Northern Lights and the terrestial magnetic storms are certainly due to sunspots. In the past, they have noted the relationship between these phenomena, but have not been sure that this relationship was not merely coincidental. This year, however, H. W. Wells of the Department of Terrestial Magnetism of the Carnegie Institute, was able to predict accurately the September 18 display several days ahead of time.

Before the September 18 Aurora, also, motion pictures were made of one of the sun’s spots for the first time, according to the report of Dr. Edison Pettit of the Mount Wilson Ob- servatory, using a new type of instrument known as an interference polarizing monochromator. The sunspot was shown to be a solar tornado of fiery gas, whirling on the surface of the sun at a speed of 120,000 miles per hour.

When first seen, the tornado was 8,000 miles wide at its base and 38,000 miles high! A smoke-like column projecting from its top reached an elevation of 68,000 miles, and during the course of observation a knot of gas broke away from the top and was hurled upward at a speed of 130,000 miles per hour!

But this “movie actor sunspot” was a baby compared to many sun-spots!

In the unimaginable heat of these fiery cyclones of the sun, hydrogen and helium atoms are being constantly broken up and reformed, and in the process great waves of solar radiation are shot out into space.

It has now been definitely determined that ordinary solar radiation—sunlight, as we know it, from the infra-reds through the ultra-violets— increases measurably during periods of sunspot activity. But also, observations by Dr. Harlan T. Stetson of the Massachusetts Institute of Technology have definitely shown that sunspots produce another radiation, different from sunlight, in the form of relatively slow-moving electrically charged particles, somewhat akin to electrons and protons.

Light, at its terrific speed shoots down upon the earth without being appreciably affected by the earth’s magnetic field.

But the sunspot’s slower electrically charged particles, traveling only about 1,200 miles a second, are seized upon by the earth’s magnetic field as they enter the outer atmosphere, and are drawn toward the magnetic poles.

Now, these slow-moving streams of electrical particles are what cause the Aurora, as we shall explain in a moment. Their attraction to the magnetic poles, due to their slowness, is the reason why the Aurora is seen principally in far northern latitudes. At times of great sunspot activity, more of these electrical particles are produced and they tend to “pile up” and back down into the lower latitudes. The September 18 Aurora was seen as far south as Georgia and Southern California.

Now for the manner in which these mysterious energy-bombardments from the sun cause the Northern Lights to light: The Norwegian geophysicist, Vegard, has recently explained that, in the simplest terms, the Northern Lights are lit in very much the same manner that one of our modern neon advertising signs is made to glow!

A neon sign is a sealed tube containing neon gas at low pressure, with an electric filament introduced. When the electricity is turned on, the filament shoots off electrons and the electrons bombard the gas. Outer electrons are stripped from the gas atoms by this bombardment, trans- forming the gas into an unbalanced energy-state which causes it to glow. Neon produces a red color. But scientists can reproduce all the eerie colors of the Northern Lights in the laboratory by bombarding various types of gases. Nitrogen glows green; mercury vapor, a blue-green; argon, a pink shade, and so on.

Scientists have now proven to their own satisfaction that this is exactly what happens in the upper areas of the atmosphere when the gases of the atmosphere, at low pressure, are bombarded by the electrified particles shot off from sun-spots. The Aurora is a celestial “strip-tease,” in which energy-particles from the sun strip electrons from the gas atoms of the super-stratosphere and cause them to luminesce.

They have even reproduced exactly the mysterious yellowish-green which is characteristic of the Aurora. This color, due to a single wave-length no where else duplicated in nature, puzzled researchers for a generation, until Sir John McLennan of the University of Toronto demonstrated in the laboratory that it is given off by atomic oxygen in a peculiar state of excitation, and then only when mixed with some of the other gases normally found in the atmosphere—argon, neon, helium and nitrogen.

The significance of this green line light is due not alone to its presence in the Aurora. It is also the most conspicuous light-line found in the luminescence of the night sky which is present all over the earth every night. On a clear, moonless night, sky-light is equivalent to that of a 25-candlepower lamp about 300 meters away. It has been found that the stars contribute approximately one-fourth of this light, and the balance is due to luminescence.

Experiments done by Stormer almost complete man’s knowledge of the Aurora. Stormer, in recent tests, determined that the Aurora occurs not at great distances above the earth, as was originally believed, but in that section of the atmosphere ranging from 50 to 80 miles from the earth’s surface. He measured the Aurora by photographing the phenomenon against a background of stars and then calculated by triangulation.

Dr. Stetson, of M. I. T., explained recently that there is a regular sequence of magnetic phenomena. First, sunspots are observed. There is a lag of about a day, and then the Aurora appears in the night sky. At about the same time, short- wave radio transmission is affected—in some cases completely blanketed out. Then, about a day later, standard-broadcast waves are affected.

In some instances, telegraphic communications are blanketed out, and the news teletypes in newspaper offices, and tickers in brokerage offices cease to function or bring in nothing but garbled messages.

During the September 18 storm, radio and telegraphic engineers whipped the sunspots for the first time in history.

By experimentation, they had learned that only east-west messages, or those running counter to the south-north magnetic field, are affected by these magnetic outbursts. They had also learned, as outlined above, that shortwave and standard broadcast frequencies are affected at different times during a magnetic storm.

RCA beat the magnetic waves on their foreign broadcasts by sending their messages “around the elbow.” They fired their radio messages south from New York to Buenos Aires, where it was automatically made to “turn the elbow” and was relayed to London, thereby dodging the storm by a 12,000-mile north-south detour. The messages made no stop in the Argentine and were flashed directly across the South and North Atlantic to out-trick nature’s bombardment.

Success was also achieved for transoceanic messages by alternating between long wave and short wave broadcast senders. The storm lasted for 25 hours, according to RCA engineers, but at no time was service cut off.

From the first observations recorded by literate men, the sublime display of the Northern Lights has stirred practical observers to lyrical ecstasies, and the scientific explanation detracts little from the enthusiasm.

One of the best descriptions is quoted from a Norse manuscript of the year 1250: “It appears like a flame of strong fire seen from afar. Pointed shafts of unequal and very variable size dart upwards into the air, so that now the one and now the other is the higher, and the light is floating in a shining blaze. So long as these rays are highest and brightest, this sparkling fire gives so much light that, out of doors, one can find one’s way about and even hunt. In houses with windows it is light enough for men to see each other’s faces.

“But this light is so variable that it sometimes seems to grow obscure, as if a dark smoke or thick fog is breathed on it, and soon the light seems to be stifled in this smoke. As night ends and dawn approaches the light begins to pale, and disappears when day breaks. Some people maintain that this light is a reflection of the fire which surrounds the seas of the north and south. Others say it is the reflection of the sun when it is below the horizon. For my part I think it is produced by the ice which radiates at night the light which it has absorbed from tlie day’s sunshine.”

Dr. Irving Krick, noted meteorologist, recently announced that he had determined a definite cycle of weather behavior which corresponds to the known 11-year cycle of sun-spot activity, which may make possible long distance weather forecasting hitherto undreamed of. The Harvard School of Business has released a report showing a direct relationship between solar radiation and the ups and downs of the stock markets. Scientists have found a relationship between sunspot radiation and crimes of violence. It has even been pointed out as significant that both World War I and World War II broke out at periods of maximum sunspot activity.