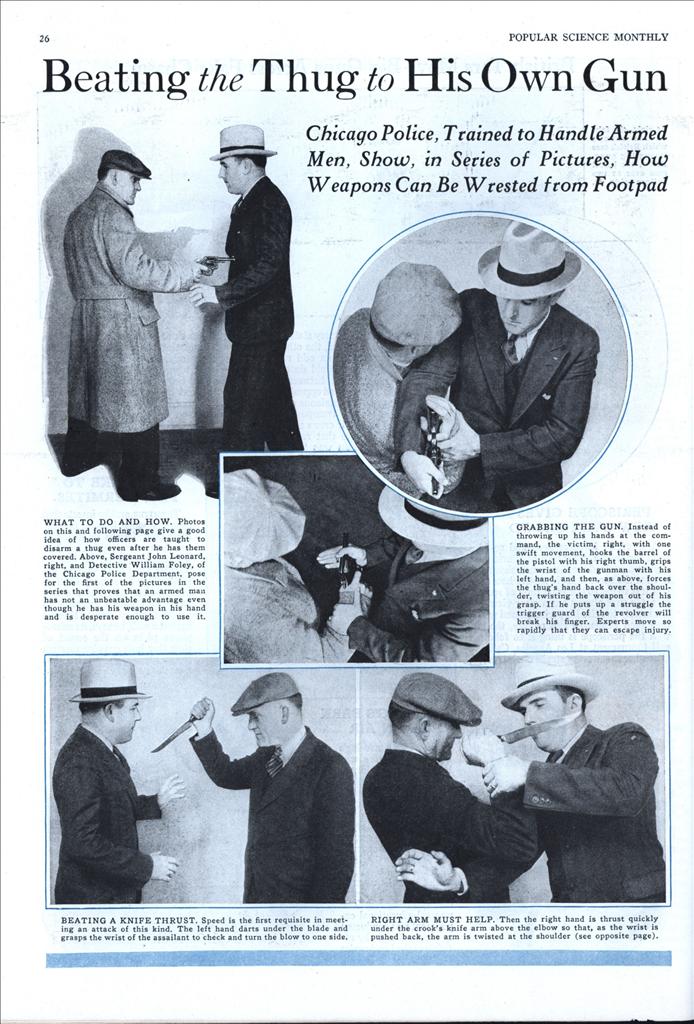 Beating the Thug to His Own Gun

Chicago Police, Trained to Handle Armed Men, Show, in Series of Pictures, How Weapons Can Be Wrested from Footpad

WHAT TO DO AND HOW. Photos on this and following page give a good idea of how officers are taught to disarm a thug even after he has them covered. Above, Sergeant John Leonard, right, and Detective William Foley, of the Chicago Police Department, pose for the first of the pictures in the series that proves that an armed man has not an unbeatable advantage even though he has his weapon in his hand and is desperate enough to use it.

GRABBING THE GUN. Instead of throwing up his hands at the command, the victim, right, with one swift movement, hooks the barrel of the pistol with his right thumb, grips the wrist of the gunman with his left hand, and then, as above, forces the thug’s hand back over the shoulder, twisting the weapon out of his grasp. If he puts up a struggle the trigger guard of the revolver will break his finger. Experts move so rapidly that they can escape injury.

BEATING A KNIFE THRUST. Speed is the first requisite in meeting an attack of this kind. The left hand darts under the blade and grasps the wrist of the assailant to check and turn the blow to one side.

RIGHT ARM MUST HELP. Then the right hand is thrust quickly under the crook’s knife arm above the elbow so that, as the wrist is pushed back, the arm is twisted at the shoulder (see opposite page).

ATTACK FROM REAR. When a gunman thrusts a revolver into his victim’s back, he apparently has an unbeatable advantage.

KNIFE GRIP IS BROKEN. In the position above, the knife hand is forced so far back that the crook has to let go of his weapon.

SPEED AND STRENGTH WIN. At the attack from behind, the victim swings his body suddenly to the right so that his right arm, held stiffly away from his side, strikes the wrist of the thug, throwing it to one side as shown above. Then, at left, is seen the off-balance position into which this maneuver throws the criminal. The victim’s right arm continues around the gun arm and his fingers grip above the elbow. At the same time, with his left hand he seizes the barrel of the revolver. Below, this leverage makes it possible to twist the hand so far back over the robber’s shoulder that he can no longer keep his grip on the butt of the gun and it is easily taken away by his intended victim. Each of these movements, of course, calls for the greatest possible speed and sufficient strength.