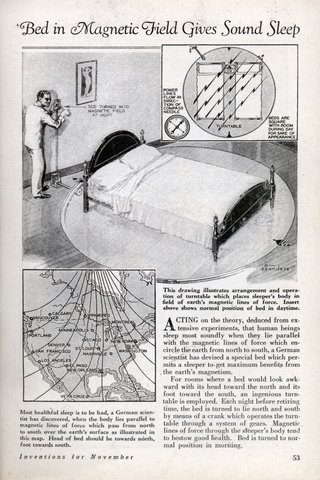 Bed in Magnetic Field Gives Sound Sleep
ACTING on the theory, deduced from extensive experiments, that human beings sleep most soundly when they lie parallel with the magnetic lines of force which encircle the earth from north to south, a German scientist has devised a special bed which permits a sleeper to get maximum benefits from the earth’s magnetism.

For rooms where a bed would look awkward with its head toward the north and its foot toward the south, an ingenious turntable is employed. Each night before retiring time, the bed is turned to lie north and south by means of a crank which operates the turntable through a system of gears. Magnetic. lines of force through the sleeper’s body tend to bestow good health. Bed is turned to normal position in morning.