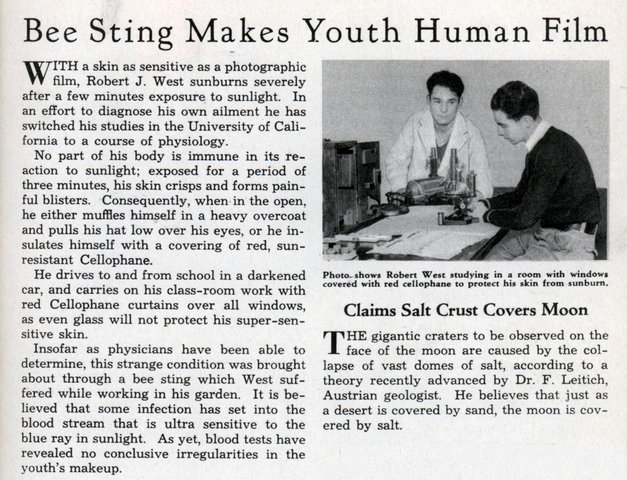 WITH a skin as sensitive as a photographic film, Robert J. West sunburns severely after a few minutes exposure to sunlight. In an effort to diagnose his own ailment he has switched his studies in the University of California to a course of physiology.

No part of his body is immune in its reaction to sunlight; exposed for a period of three minutes, his skin crisps and forms painful blisters. Consequently, when in the open, he either muffles himself in a heavy overcoat and pulls his hat low over his eyes, or he insulates himself with a covering of red, sun-resistant Cellophane.

He drives to and from school in a darkened car, and carries on his class-room work with red Cellophane curtains over all windows, as even glass will not protect his super-sensitive skin.

Insofar as physicians have been able to determine, this strange condition was brought about through a bee sting which West suffered while working in his garden. It is believed that some infection has set into the blood stream that is ultra sensitive to the blue ray in sunlight. As yet, blood tests have revealed no conclusive irregularities in the youth’s makeup.