Play Girl
Issue: Oct, 1965
Posted in: Sexuality, Sign of the Times
5 Comments on Behind college doors… “The TRUTH about CAMPUS IMMORALITY” (Oct, 1965)

Behind college doors… “The TRUTH about CAMPUS IMMORALITY” (Oct, 1965) 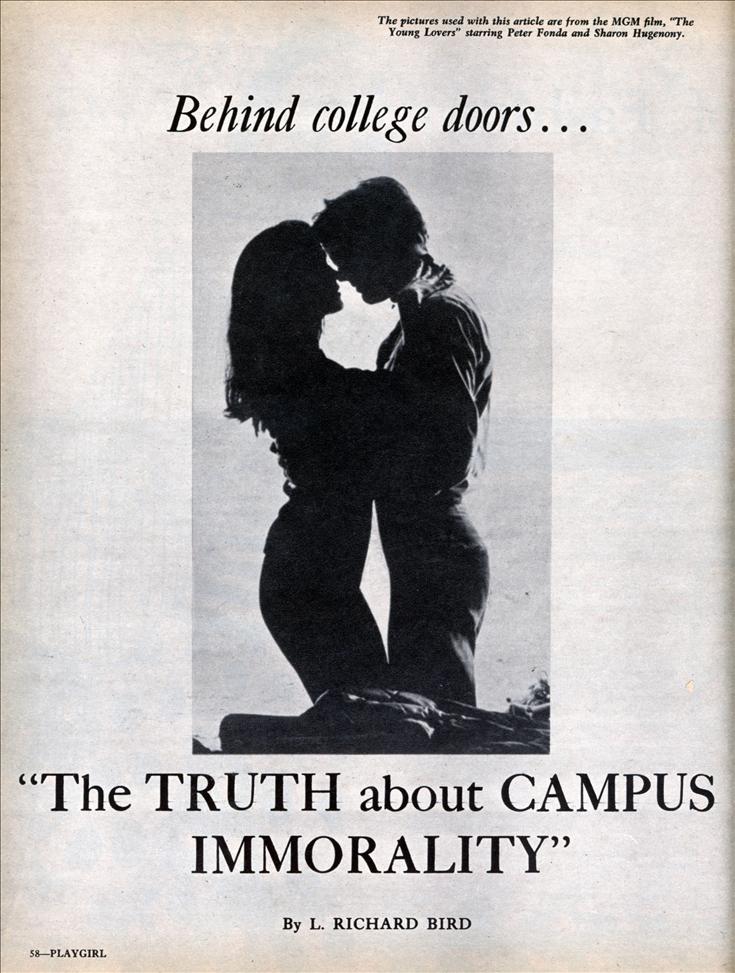 “The TRUTH about CAMPUS IMMORALITY”

Do you believe in sex before marriage?”

– “Not if it delays the ceremony.”

This bit of banter took place on a popular national satire TV show. It served to point up a contemporary situation that exists on many college campuses today. Only since it has been brought to focus by publicity have many colleges or responsible adults attempted to solve the problem. It is a rather interesting situation when you consider that many of the adults who are so upset have had a hand in creating it. We shall discuss this point later.

It is a problem to the point where many collegiate authorities are attempting to focus on the campus problem and reach a solution. Dr. Blaine of Harvard, Sarah Blanding of Vassar, and Prof. Kirkendall of Oregon State University have voiced concern over sex on the campus.

Why is it wrong? It leads to out-of-wedlock pregnancies, or unwanted marriages, venereal diseases, divorce, unhappy homes, the abrupt end of education and possibly careers. These can lead to many more frustrating and traumatic experiences than can the ability to say “no” to an ardent and ego-nurturing “lover.”

The young people of our college campuses are more intelligent, better provided for materially, have more opportunities, and are more sophisticated (a rather nasty word when you really define it) than any previous generation. How, then, can they allow themselves to be “conned” into illicit relationships that in many cases are not even physically gratifying? In some ways it is not too difficult to get to the root of the problem.

First, it is the magic word THEY.” “They say,” “they do,” “THEY”-“THEY”—”THEY.” Our society has become more conscious in many ways of what “they” say than what the individual knows is right. This nebulous, faceless crowd, then, allows us to rationalize our wrongdoing by “passing the buck” over to the crowd. “They said it was O.K.” “Everyone else is doing it, why shouldn’t I?” please turn page On the other hand, we are afraid of what “they” will say if we get caught. Now we are in a moral and intellectual dilemma. Which way Out?

Unfortunately no contemporary group or individual has come upon an answer to the dilemma of these young men and women. But there is an answer. It is a spiritual one, but many clergymen and churches are hesitant to give this answer because they too are spiritually empty and therefore unable to supply the vast empty spiritual chasm that exists within the soul of many of our young people.

Ours, therefore, is partially a crowd psychology where the individual is at most a quasi-nonentity and is therefore laughed at, mocked, ridiculed, or ignored because of a firm moral stand.

Our young people are like this also because there is no firm code of discipline for anyone to follow on many of our campuses. Consequently, a rebellious young adult reacts accordingly. Yet they do want the colleges to take a stand, one way or the other, but take a stand.

In the June 20, 1964 issue of Saturday Review of Literature Donald Eldridge, President of Bennett College stated that 40 young men and women of 8 eastern colleges asked to meet with “college deans and/or presidents … to consider jointly possible developments for . . . student-defined propositions.”

Two of these propositions are very interesting.

1. The college’s position on moral standards should be made clear. It should take a stand on where the responsibility lies. Many institutions remain ambiguous in this respect.

2. The college should represent something identifiable to its students, enabling them to know what they are living by. There is a general lack of direction.

When one sees these statements by college students we wonder where * in the name of good sense have the homes and churches been in the past few decades? Wallowing in permissiveness, ecumenicalism, pious platitudes involving international brinkmanship, right and left-wing menaces? (I have a feeling I’m in for trouble with those last two!) Have parents been so busy with their social cancers that they cannot give their children the sense of direction that they so sorely cry for in college.

I teach. United States History is my field of endeavor. I watch undisciplined young people trying to cope with a course that demands mental and intellectual discipline. Many of them barely succeed. If they barely succeed with the mental disciplines, where, then, will they succeed with the moral, spiritual, or psychological discipline of self-control? Selflessness? Is the young man with a young lady in a motel room thinking of her or their welfare? Hardly. He is just thinking, in most cases, of his own ego-nurturing attitude. Ask him later what type of girl he wants to marry, chances are he will think a second and say “well, she will have to be a nice girl.”

* The adults of our age, then, are in some ways responsible for their own children’s attitudes. Where have these adults been? Why haven’t they established a “position on moral standards”? Why haven’t they taken “a stand on where the responsibilities lie”? Why haven’t they “represented something identifiable” to their offspring? Why haven’t many of the clergymen and teachers of our generation done these things? Aren’t these the people to whom we look for guidance?

A child listening to a parental harangue on the evils of drinking is not going to heed the message too much when he sees his father quaffing cocktails before dinner. No son or daughter will likewise accept parental advice when they know the morals of their parents are in question. The standards must be set by the home and before the young person is 18 years of age.

A good deal of the heartbreak and frustration could be avoided if only the interest and time were taken before these desires began burning as unquenchable and destructive flames. A fire in the home is good when used properly to create the right temperature and feeling, but when not properly cared for the whole house and sometimes the neighbor’s can be destroyed. Knowledge then becomes a prerequisite. How much more important is the human life and soul and love than the combustible material of a house?

A Massachusetts lawyer and judge of 25 years’ experience Judge Lennie Loitman Barron states: “We have a basic task to undertake: home training.” Dr. Stephen Nordlicht, a New York psychiatrist, points out that the earlier age of today’s sex-social activity often leads to adolescent pregnancies and marriages, and that orientation must begin at home, before youngsters enter high school.

Why do I seem to hit hard at the home? Recently in a newspaper article the Drs. Duval were asked: “Where does a girl get her moral standards?”

This was their answer: “At home, by a wide margin. When Dr. George Callup’s staff asked some 2300 representative American women what had been the most help in establishing their personal sense of morality, most of them credited their homes. Education in schools was given credit by 14* of the women. This does not mean [then] that schools should not try to upgrade moral standards—after all, 14* of American women represent millions of homes in the making.” This seems to be an avenue worth pursuing in order to reach a solution.

As a teacher I have seen the results of these mature young people and their exploits into adult unmarried love. One college age girl is now pregnant and forced into marriage with a college man she barely knew who probably wanted her to “prove her love.” If they cannot cope with their emotions at a fraternity party or the processes of reproduction in these days of “safety,” how then will they cope with the emotions of parenthood and marriage? It is amazing that these young girls who break down crying when a young man won’t notice them or who are afraid their looks or personality won’t attract a certain male, will take the chance of bearing a child which requires more patience, maturity, wisdom, and stamina than flirting or being noticed.

¦ I admit to the sexual urge of the teenager and young adult. I used to be one. I went to a military school where the natural tendencies of these young men were evident in the usual ways: bull sessions, bravado, etc. However, many of us were able to control these natural tendencies. None of us were humiliated by our lack of sexual experiences. We didn’t suffer any traumatic experiences. We were healthy and happy. Many of us participated in extra-curricular activities and were therefore able to relieve much of our anxieties.

* Recently at a class reunion, I found many of these young men happily married and not seemingly suffering from any lack of premarital love.

In our situation it was largely due to a discipline that had been instilled in us at home and/or military school—not a harsh Spartan discipline, but a firm discipline with understanding both by parents and instructors. This is one of the major factors, along with discipline, as I see it, the understanding and knowledge of an adult and not unequivocating condemnation.

Sex is not a toy as some men may contend, or a weapon as some women may wield. It is a definite, exciting, beautiful, and exhilarating part of life. It must be shared wisely by two people who can cope with it and share its ramifications for life—a life that can be whole and completely shared.

* Sex is not a quick grab for temporary ego-nurturing in a motel room or the passing moments of so-called social acceptance on the sand of a beach. Sex is too fine to be subjected to the whims of a fad. It is, in a sense, eternal and fulfilling, something that fads cannot achieve. If I sound the idealist, I am, although, I hope, not a naive one.

Where then can we seek solutions? The answers are not all found easily. Many, however, can be found in the home with the setting of a mature and spirital code or tone, something the young people can actually see and sense.

The young mind cannot always grasp the abstracts of moral philosophy, but they can grasp the realities of a guideline—a non-hypocritical guideline of practicing and living what one teaches.

“If only . . .” is the beginning of many a tearful breakdown to the explanation of shame. If only the church, the home and the school would get off their lackadaisical and platitudinous bottoms and get down to the basic idea of setting these guidelines based on knowledge and adult and human understanding, many a frustration could be avoided and a sense of moral discipline instilled.

It is not a simple task. It requires great effort and patience, but I think the young people of this country are intelligent and capable of seeing, understanding and then following those guidelines. After all, they are asking, almost imploring, our help.

John W. Gardner in an article entitled, On Men and Moral Values, states: “The moral order undergoes regeneration as well as decay—a continuous ‘recurrence of birth’, offsetting death. Men are always corrupting the old symbols, drifting away from the old truths. But while some are losing their faith, others are achieving new spiritual insights; while some grow slack and hypocritical, others bring a new meaning and vitality to moral striving.”

Are we, the adults of this generation, going to aid in bringing “a new meaning and vitality to moral striving,” or will we in our own moral slackness allow hyprocrisy and immorality to succeed and introduce chaos? Your answer is in the same hands that hold this magazine.