Modern Mechanix
Issue: Dec, 1933
Posted in: How to, Movies
No Comments on Behind the Scenes With Movie Sound Fakers (Dec, 1933)

Behind the Scenes With Movie Sound Fakers (Dec, 1933) 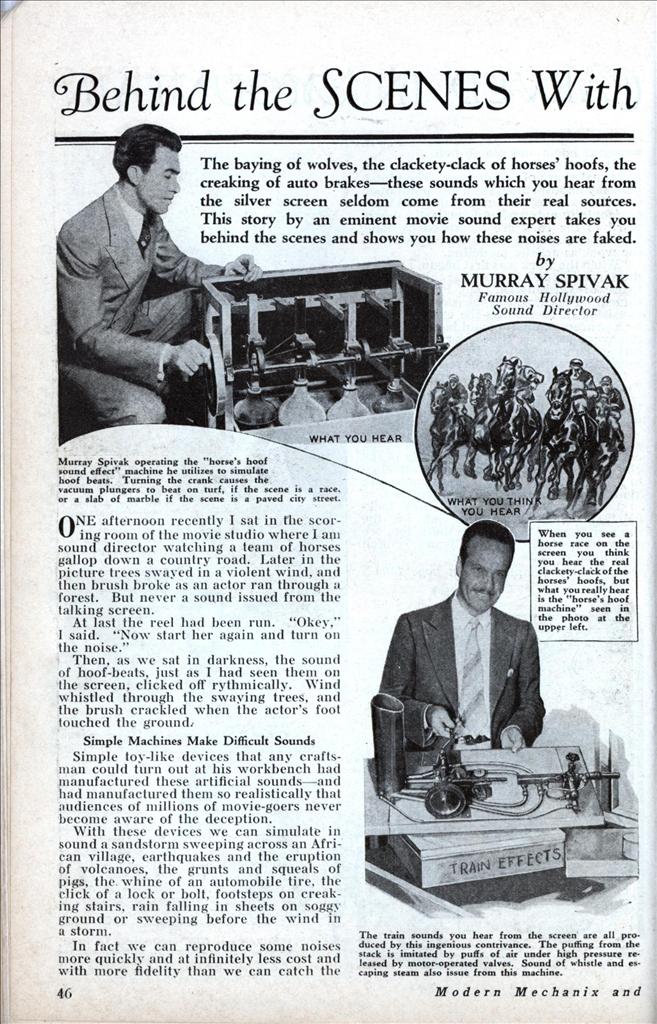 Behind the Scenes With Movie Sound Fakers

The baying of wolves, the clackety-clack of horses’ hoofs, the creaking of auto brakes—these sounds which you hear from the silver screen seldom come from their real sources. This story by an eminent movie sound expert takes you behind the scenes and shows you how these noises are faked.

ONE afternoon recently I sat in the scoring room of the movie studio where I am sound director watching a team of horses gallop down a country road. Later in the picture trees swayed in a violent wind, and then brush broke as an actor ran through a forest. But never a sound issued from the talking screen.

At last the reel had been run. “Okey.” I said. “Now start her again and turn on the noise.”

Then, as we sat in darkness, the sound of hoof-beats, just as I had seen them on the screen, clicked off rythmically. Wind whistled through the swaying trees, and the brush crackled when the actor’s foot touched the ground.- Simple Machines Make Difficult Sounds Simple toy-like devices that any craftsman could turn out at his workbench had manufactured these artificial sounds—and had manufactured them so realistically that audiences of millions of movie-goers never become aware of the deception.

With these devices we can simulate in sound a sandstorm sweeping across an African village, earthquakes and the eruption of volcanoes, the grunts and squeals of pigs, the whine of an automobile tire, the click of a lock or bolt, footsteps on creaking stairs, rain falling in sheets on soggy ground or sweeping before the wind in a storm.

In fact we can reproduce some noises more quickly and at infinitely less cost and with more fidelity than we can catch the original at its source with a delicate microphone. Why wait on a hilltop for thunder to crash across the sky when a sheet of metal, shaken vigorously, serves the purpose better at the studio?

As we work to synchronize the correct sounds with such scenes as the aforementioned, there stands against one wall a machine consisting simply of eight wires radiating from a hub. A handcrank turns the wires, each of which has at the end a four-inch segment bent at right angles to the body of the wire.

Synchronizing Sounds With Picture On the floor rests a small machine containing four vacuum rubber plungers that beat against dirt. A sound effects technician stands near by, two small branches cut from a shrub in his hands. At his side is the shrub.

As the action unfolds the wires begin to speed through the air until the low moan of wind fills the room. The plungers are then worked up and down. A horse is trot- ting. And as the technician crushes dried sprigs in his hand, one visualizes heavy hoots tramping down the thin underbrush of the forest.

As the picture progressed, several types of wind were manufactured in the dim light of the scoring room. For whistling wind we have devised a second machine consisting of a Hat, plate-like screen. This revolves through a single plane and its noises sound like wind cutting around corners or driving through the rigging of the ship—exactly the kind you hear when walking home after dark any gusty spring evening. Its ends cut through the air, whistling as they go, and the onrush of air through the holes in the screen helps provide the sudden gusts.

Sandstorm Terrifies Even Sound Men By “mixing” these two simple devices, or turning them simultaneously, and by revolving two discs covered with sandpaper against each other, we create in a moment a sandstorm that sends shivers down the back of even the most experienced sound men.

This, however, was a simple storm. The sand merely blew away across the desert. Suppose we huddle in the lee of a building, directly in the path of the storm. Listen! The machines begin to turn, but now I bear down harder on one of the sandpapered discs.

Sand commences to blow hard against the imaginary wall. By increasing the friction on the sandpaper, 1 create the sound of the tiny particles being halted in their wild flight by the building that stood in their way.

We merely “build up” the sand part of the storm to make the storm .more violent. How much sound we would create in a sand storm for a given scene depends largely on what the eye would see.

If the scene shows sand blowing unhindered across a desert, it will carry less volume, less “beating,” than it would were it striking buildings or tents.

After the sand storm, we turn to the task of producing a rainstorm as one hears it within a closed room. Again the wind machines whistle while a sound man crushes bits of the shrub between his hands. One hears as many as five distinct noises coming from different parts of the room, but they enter the microphone together. Wind, rain, crushed shrubs and the beat of a horse’s hoofs in the distance. Stormy noise in a steam-heated room!

With the “horse’s hoof sound effects,” the only name by which I know the machine, we reproduce the rhythm of horses running 60 miles an hour, or some 20 miles faster than the world’s fastest can speed down the back stretch. Here’s how and why this works as it does: Three Machines Sound Like Dozen Horses One picture showed the heated finish of a race. The camera truck sped 35 miles an hour ahead of the horses, the lens focussed on the forelegs and feet. But the film was turning only a little more than half its usual rate. This produced on the screen the effect of a speed nearly twice that actually achieved.

Had the sounds of the hoof beats been recorded at the same time, when reproduced they would have lagged far behind the picture.

With the tiny machines, however, I know we could match any speed desired. So, into the scoring room we carried three of these “mechanical horse hoofs” and there, as the scene unfolded, three assistants turned the cranks and 12 rubber cups beat against dirt in the bottoms of the boxes to represent a dozen snorting horses tearing down a straightaway.

The operator does not need a sense of rhythm, as a series of cams is so set that the cups beat down like a galloping horse. While one machine sounds like a lone horse, the beats of three operating together become indistinct; thus, with three, the operators can “cheat” to represent as many horses as may be shown on the screen.

If the horses run on turf, the rubber cups fall on dirt; if a runaway on a city street is to be reproduced, a slab of concrete is inserted.

Better rain than that which falls from the sky can be produced indoors. For some “spots,” we ,use synthetic rain, while for others, we actually “mix” the real and the false. As a sound track of real rain is run, from the side of the scoring room comes the patter of tiny rocks and marbles and other small objects tumbling over low obstacles in a revolving drum.

One has what the other hasn’t. We use real rain for distant water particles striking the earth or trees, and the synthetic to represent a “beating” rain, the kind that smacks down on a roof. Sometimes actual rain sounds like hail and when it falls into a pool of water it gives off a metallic click which sounds too mechanical for our purposes.

The rain and wind and volcano machines look simple—and are—yet from them come some of the talkies’ most ominous sounds. Recently we made and delivered in less than a day an earthquake with a background of a cyclone and the eruption of a volcano.

Faking Terrifying Volcano Noises Bowling balls, rolled over padded wood strips in the revolving barrel, supplied the thunder rumble. The more immediate thunder claps came from thunder drums. The two wire machines supplied whistling wind, while a louder, deeper wind blew out from a blower. Several sticks of dynamite, buried deep in the earth several hundred feet from the microphone, furnished the low booms of the volcano. Recorded separately, these sounds later were “mixed” for the completed effects.

From an earth-shaking volcanic eruption to the squeals of beasts and birds of the barnyard was but a simple step when we turned, after “scoring” the volcano and earthquake, to a series of horns mounted on a music rack.

These once were organ vox humana pipes which had been tuned to a lower note. By blowing a sudden, short “burst” into one, I produced the grunts of a hog. With assistants blowing two more horns, a whole barnyard full of pigs and boars walked into the room!

Even Door Slam Is “Dubbed”

Sounds of people moving about in their homes are among the most difficult to synchronize naturally. The door in a movie set, on account of the high pitched flimsy construction, does not slam with the reverberation and boom that should come from a door slamming in the ordinary home.

So, when an actor stealthily slips a key into the back door, tip-toes up the creaking stairs and, finally, by mistake slams his bedroom door, you do not hear what you see.

These sounds came from a “door cabinet” and a small frame containing five stair steps. The box behind the door, which stands no taller than a child and is about three feet wide and three feet deep, supplies the reverberation of a room when the door is slammed.

And a resin-covered tongue of leather, inserted between the two wooden members of each step, which are held apart by a small spring, furnishes the squeak. If the door squeaks, that noise comes from a tight fitting joint rubbing against resin in a cylinder fixed alongside the cabinet.

With this device, one assistant can provide the click of a key or bolt, turning of the knob, squeak of opening and closing and the slam without moving from his position.

But the door came from the carpenter shop and in its center may be inserted a pane of glass when needed, for an elevator door with glass tingles more than does a door of wood only.

Every week we invent new devices that rival and often surpass nature in the perfection of their tones. We seek constantly new ways of bringing to the screen sounds that are imperfect in themselves or the recording of which in the natural state are too costly.