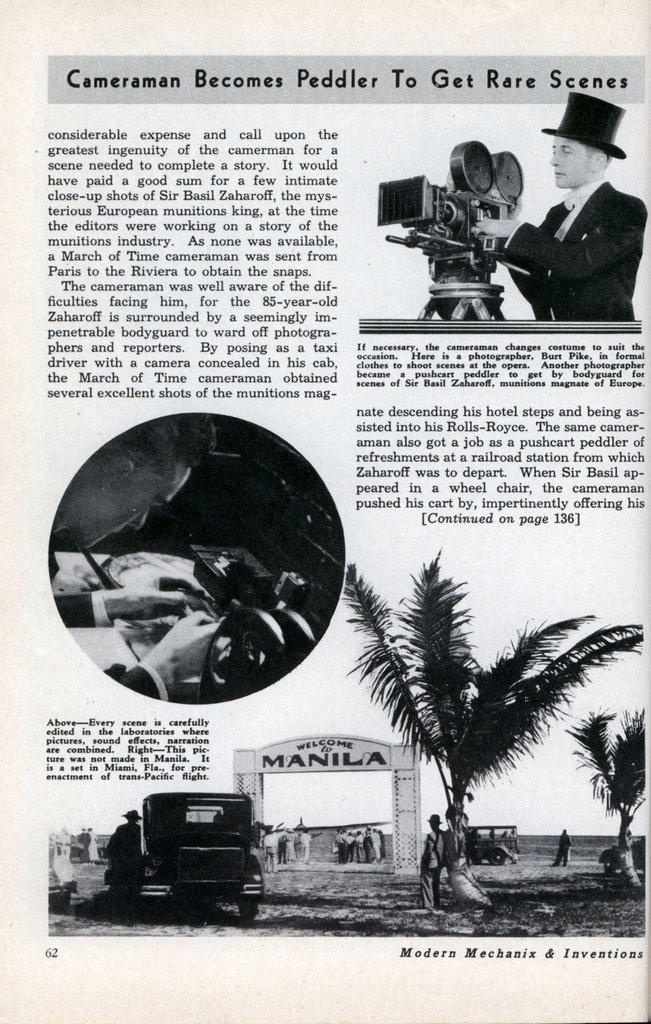 Behind the Scenes with the MARCH of TIME

A FLOURISH of trumpets and the announcement “March of Time”, coming through the loudspeaker at your local movie theater, represents the introduction of a new kind of motion picture journalism—dramatized news pictorially presented to impress you with the importance of current events.

Like the fast moving drama of its daily radio news presentation and the vivid stories of its companion magazine, March of Time on the screen has won public favor because it combines the striking events of the present with the unusual background so often forgotten in the hustle of the average newspaper editorial rooms. A clever harmony of realism and illusion swiftly flashed on the screen indelibly stamps on the minds of the spectators the historic importance or the social or economic significance of the story being unfolded before them.

The making of this new type of newsreel is a captivating story of originality put to work. The ingenuity of the inventor, the trick lighting and angles of the expert photographer, the realistic portrayal of actions and voices of personalities by the prominent persons themselves in the role of amateur actors or by professional character actors, and the audacity of the fearless news reporter all play a part with the psychological importance of sound to convert the ordinary newsreel scene into a story that will not be forgotten.

March of Time’s camera crews, stationed in important centers of the world, are ready to dash to an unfolding news story and catch real life scenes. But when circumstances make this impossible, the technique of re-enactment is employed. The completed film is a judicious blend of old and new pictures, real voices and actors, actual scenes and re-enacted scenes, harmonized with true sound effects, the voices of the narrators, and superimposed sound.

The task of supervising the production of each release, which comes out once a month, is in the hands of three men—Roy E. Larsen, president of the March of Time Corporation; John S. Martin, vice president and editor, and Louise de Rochmont, production chief. These are the men who cull from the news events of the month the happenings that are significantly important to the present and future life of the motion picture public.

It is the task of these men to see that each sequence has some bearing on a news story of national significance and that it is treated intimately. Instead of the short unrelated scenes of the usual newsreel, each sequence must have a definite beginning, a middle, and an end—it must be a complete story in itself.

If necessary the March of Time will go to considerable expense and call upon the » greatest ingenuity of the camerman for a scene needed to complete a story. It would have paid a good sum for a few intimate close-up shots of Sir Basil Zaharoff, the mysterious European munitions king, at the time the editors were working on a story of the munitions industry. As none was available, a March of Time cameraman was sent from Paris to the Riviera to obtain the snaps.

The cameraman was well aware of the difficulties facing him, for the 85-year-old Zaharoff is surrounded by a seemingly impenetrable bodyguard to ward off photographers and reporters. By posing as a taxi driver with a camera concealed in his cab, the March of Time cameraman obtained several excellent shots of the munitions magnate descending his hotel steps and being assisted into his Rolls-Royce. The same cameraman also got a job as a pushcart peddler of refreshments at a railroad station from which Zaharoff was to depart. When Sir Basil appeared in a wheel chair, the cameraman pushed his cart by, impertinently offering his wares to one of the body guards while an automatic camera, concealed among the oranges, took the first close-up motion pictures ever made of the “mystery man of Europe.” The preparation of a story for a March of Time sequence is assigned to one or more script writers. The script may be rewritten from twenty to 150 times before it is approved by the editors. Once it is approved, conferences are held to determine what camera shots will be needed. Some of the scenes needed already are on file in the laboratories or can be obtained from film libraries. Others must be re-enacted because no camera record exists. These may be made with the actual persons, involved in the story, performing as amateur actors. If necessary doubles of these persons are called upon to re-enact the scene and supply the necessary realism.

Prominent Men Enact Scenes These re-enactments are probably the most difficult part of the entire work and call for a great amount of ingenuity.

Sometime ago, in an issue which described the career of the late Huey P. Long, the senator himself posed for bits of the episode in his Washington office. In another issue, which was devoted to the retirement of Giulio Gatti-Casazza, general director of New York’s Metropolitan opera house, the famous Italian allowed a cameraman, dressed in top hat and evening clothes, to shoot scenes of himself backstage at the opera house. Chief Justice Charles Evans Hughes of the Supreme Court is another important personality who has permitted himself to be photographed for a sequence describing life in Washington.

Editors Must Forsee Events The March of Time has on file the names and photographs of hundreds of actors, who can be called upon to appear in the scenes that must be re-enacted. There also is a list of actors who can impersonate the voices and actions of important characters. These sometimes are called upon for only a few feet of film necessary to complete a story.

Because the professional news cameraman can not always be at the scene when a story breaks, the editors of the March of Time are willing to correspond with amateurs who may have been fortunate enough to be present or who have unusual scenes which might prove of importance in the filming of future issues.

Sometimes the editors must look forward to events that are expected to occur. The scenes must then be pre-enacted. This was the case in a sequence that depicted the inauguration of the trans-Pacific Clipper air service by Pan American Airways. The filming of this story actually took place several months in advance of the actual date of the flight.

The filming took place in the Caribbean Sea, thousands of miles away from the scene of the takeoff on the Pacific coast, at the time Pan American was testing the Clipper ships that were to be used on the airline. Mr. de Rochemont, his assistant, Tom Orchard, and a crew of cameramen spent three weeks preenacting the flight. The company’s air base at Miami was transformed into a movie studio.

From blueprints of the landing stations in far-off Pacific islands sets were built on Florida shores. Through the help of the U. S. Hydrographic office an abandoned lighthouse, the exact duplicate of the Spanish type lighthouse in the Philippines, was located. The actors, that were needed to take the place of passengers on the airliners, were recruited from vacationists at the resort.

The illusion of reality in the March of Time, when re-enacted scenes must be combined with real shots, is made possible by the expert supervision of the editors in cutting the negatives. The sound effects, narrator’s voice, and music—each on different reels of celluloid—are assembled in the cutting room.