Popular Science
Issue: Jan, 1947
Posted in: Advertisements, How to
Tags: how its made
2 Comments on Behind the SIGNS (Jan, 1947) 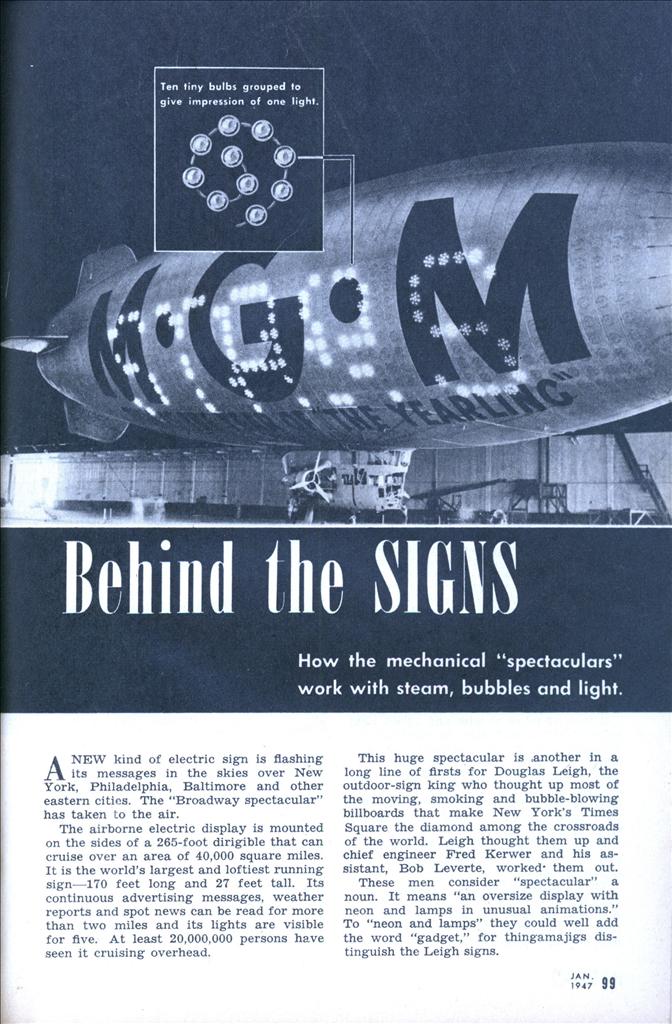 How the mechanical “spectaculars” work with steam, bubbles and light.

The new sky sign is an excellent example. Nearly every large city has at least one running electric signâ€”where words chase one another across the side of a building. But the dirigible “runner” is definitely new.

It took 26 miles of wire and 10,000 light bulbs, 5,000 on each side, to construct the dirigible sign. Enough ordinary lamps to light the display would have added too much weight, so Leigh’s thinker-uppers grouped small bulbs, about the size of Christmas-tree lamps, in such a way that their light appears to come from single large bulbs. “What from the ground looks like a single pinpoint of light is actually 10 small bulbs arranged in a spiral cluster 18 inches across.

The running sign is operated by a master control box in the gondola of the dirigible. A perforated tape, like a player-piano roll, threaded through a motor-driven switching mechanism, closes electrical contacts and lights the clusters in the proper combinations and sequence to form letters into words and move them across the sign. The running message can be changed simply by cutting a new tape on a typewriterlike machine.

One of Leigh’s more celebrated signs was the result of the wartime blackout of Broadway. Unable to use bright lights to attract attention, he resorted to motion. The result was the painted head of a soldier with a puckered mouth that blew king-size smoke rings over Times Square. Now 18 cities have smoke-ring signs. Fifteen more will soon have them.

In New York and some other cities, steam for the smoke rings is piped to the sign from the city’s central steam system. In communities where there is no commercial steam system, small automatic gas-fired boilers on the site supply the necessary vapor.

Steam helps also to advertise a brand of instant coffee in a Leigh billboard that shows a steaming 20-foot water bottle pouring water into a steaming six-foot cup. Steam pipes running to the rim of the cup and the opening of the bottle provide the realistic touch.

Even more ingenious than either the smoke rings or the steaming bottle and cup is the combination that uses chemicals, wheels and blowers to develop endless streams of glistening 10-inch bubbles for a new spectacular hawking a brand of soap powder. Leigh got the idea for the sign when he saw the popular soap-bubble toys in a five-and-ten-cent store. A few months later Kerwer and Leverte had a working model that automatically blew 1,000 bubbles a minute. The model was soon incorporated in a sign on Broadway.

Bubbles are also featured in a new Broadway diorama, or three-dimensional sign. To advertise ginger ale and club soda, two eight-foot-tall plastic highball glasses effervesce in front of a continually rising backdrop of large bubbles. Compressed air piped into the bottoms of the glasses provides the bubbling effect, while hundreds of 20-inch hollow glass globes mounted on endless motor-driven belts of invisible steel wire create the rising background of bubbles. One of Leigh’sâ€”and the public’sâ€”pets is a sign that features animated cartoons. This type of display has amused crowds and stopped traffic in New York, Boston and a number of other cities for eight years. In developing a new sign, Leigh has a standard routine. Once he is satisfied as to the general idea, he turns the project over to his engineers. They then evolve a working model of the display. After this follows a period of tinkering by the team of Leigh, Kerwer and Leverte. The working models are like what might come out of any basement workshopâ€”they are built of ingenuity and odds and ends. For instance, a tin can of the type used to store amateur motion-picture film is cut in half and soldered to form the. trough in the prototype of the bubble-making machine. Kerwer and Leverte are as handy with soldering iron and a screwdriver as they are in designing the world’s biggest and brightest spectaculars. For example, before the dirigible display was sent into the air, their office in New York’s Radio City was the scene of working tests of the 10-bulb clusters of miniature lights that were used to illuminate the flying billboardâ€”the first of three, incidentally, that are scheduled to take to the air.

If the sign is to be principally a lighted display, the design is carefully drawn and painted in colored fluorescent paints on black drawing board so that when it is viewed in a darkened room under the light of an ultraviolet lamp it gives the effects of tubes of glowing neon and brilliantly colored lights. Frequently the actual working models are dressed up and decorated with fluorescent colors to give a prospective client a moving three-dimensional idea of what the completed sign will look like. Leigh’s future list of spectaculars includes many novelties. The most ambitious is an advertisement for oranges in which a giant helium-filled balloon, the color and shape of an orange, will float in the air and drip juice into a 12-story-tall plastic glass. In another, basketball-size kernels of breakfast food will crackle and pop up from a 20-foot bowl. Right now, Leigh has his eye on the Rock of Gibraltar as a possible site for an advertisement for an insurance company that uses Gibraltar as part of its slogan. He hasn’t yet revealed what kind of mechanical gimmick he’ll use to animate the Rock. end