Popular Mechanics
Issue: Jul, 1954
Posted in: How to, Television
3 Comments on Behind the Split Screens of TV (Jul, 1954) 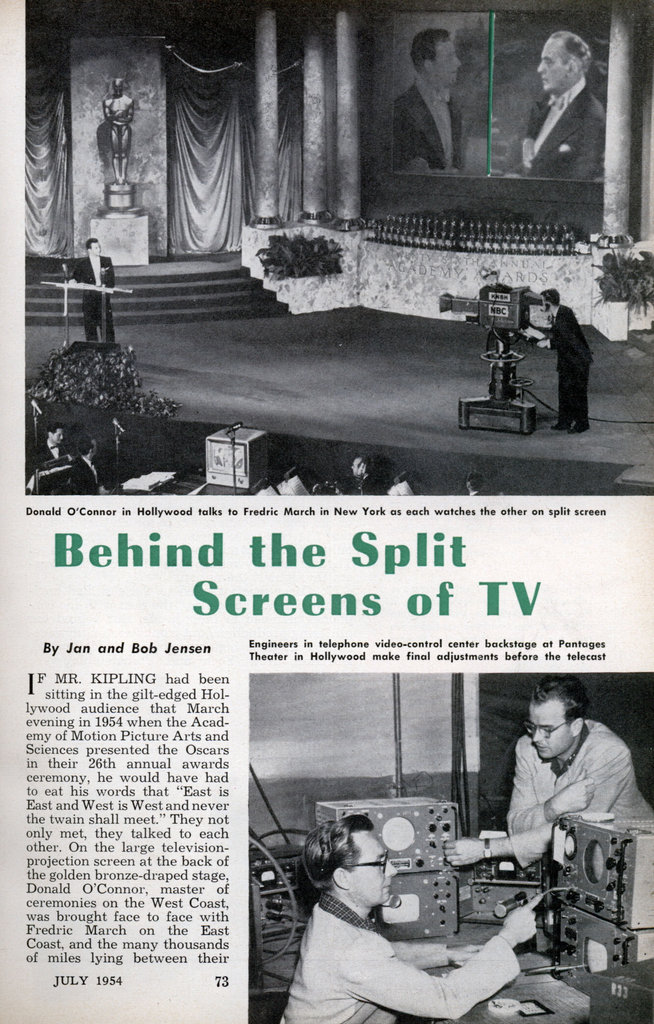 Behind the Split Screens of TV

By Jan and Bob Jensen

IF MR. KIPLING had been sitting in the gilt-edged Hollywood audience that March evening in 1954 when the Academy of Motion Picture Arts and Sciences presented the Oscars in their 26th annual awards ceremony, he would have had to eat his words that “East is East and West is West and never the twain shall meet.” They not only met, they talked to each other. On the large television-projection screen at the back of the golden bronze-draped stage, Donald O’Connor, master of ceremonies on the West Coast, was brought face to face with Fredric March on the East Coast, and the many thousands of miles lying between their respective noses had been eradicated by the magic of the communications era in which they live, so that the two were presented in one picture not only to the select audience of 2800 in the Pantages Theater in Hollywood, but to millions of TV viewers throughout the nation.

No Oscar was awarded to those skilled engineers “behind the scenes,” the men with the earphones clamped to their heads. But behind the glittering production “out front” was an unprecedented engineering extravaganza. Hollywood, Burbank, New York and Philadelphia were linked as though under one roof for the two-hour program.

When the last golden statuette had been presented and the white ties and ermine departed from the klieg-light gleam, a tired sleepy-eyed crew of engineers, in rumpled, rented tuxedos, was left to pack up the equipment and sigh, “Well, we did it. There were no boo-boos.”

It was a satisfactory feeling, after the agitated past 24 hours at the Pantages Theater, a few steps from the corner of Hollywood and Vine. No tuxedos then, but old work clothes, flannel shirts and jeans, in a bustling beehive of preparation. The only calm note was the huge replica of an Oscar standing quietly off stage center.

Workmen with coils of cables hustled back and forth. The orchestra was rehearsing repeatedly one musical phrase, “When you wish upon a star” culminating in a brilliant fanfare, over and over again, dominating the other sounds in the huge theaterâ€”the soft mutter of voices, a hammer at work, and the steady hum of the air conditioning outside the improvised television-control room backstage.

Specially built soundproof rooms were temporary headquarters for TV and radio, with an announcer’s booth, swathed in monk’s-cloth draperies, tucked away in a corner with only a television monitor from which to describe the evening’s events. The door to the NBC-TV booth was propped open for ventilation and, inside, busy engineers checked equipment and studied the wavering green

‘scopes on the banks of field-camera control units. Paper coffee cups were strewn about their control desks. Most of these tired-looking men had averaged two hours’ sleep, for only the day before had they been able to land full force in the theater. Camera and power cables had been installed a week before, but work had been limited to a few hours.

At least 30 NBC engineers were in the theater itself, with another group at the Burbank studios where commercials originated and, of course, the master-control technicians in Hollywood. In addition, there were at least a dozen audio and video telephone men working with them.

Most interesting of all in the intricate setup was a portable wipe unit, designed and built by a field engineer in four weeks’ time. Inserted in the control panels, it was responsible for the difficult split-screen effect, with Hollywood on one half and New York or Philadelphia on the other, both appearing in one picture. To get the special effect, the output of the New York video circuit was fed into a high-quality 17-inch picture monitor in a booth backstage at the Pantages. the picture retele-vised and fed into the mixing system and portable wipe unit, producing the split-screen result.

Excitement was as contagious as measles that busy morning in the dim half-light of the Pantages backstage. Somewhere a saw was whining. Telephones were ringing. The audio engineer twisted a few knobs and listened intently in his earphones. “There’s still buzz on those mike lines,” he said. “It’s got to be ground loops. Let’s put in a booster amplifier and feed high level instead of low.”

They were using 16 mikes altogether, and 24 monitors had been installed in the pressrooms, announcer’s booths and backstage which would be fed video and audio. The big-screen projector was installed by RCA, with special equipment to drive it in order to project a reverse picture from behind the screen, instead of from its normal position out in front. To produce such a picture, it is necessary to reverse the horizontal scanning of the projection tube. Since light energy was transmitted through the screen, it was impossible from the rear to tell if the projector was in focus, or had the proper amount of brightness and contrast. So there was a monitor in the audience manned by an engineer with a private line who literally “talked him in,” telling him which knobs to turn and adjust.

Eight cameras were ready, two outside the theater and six inside. One was in the theater lobby and the other mounted on a crane across Hollywood Boulevard to televise the celebrities as they arrived. Inside, two cameras were on the tower in the center of the house. One camera on this platform had two turrets, making a total of eight lenses available instead of the usual four. They were using four Electro-Zoomsâ€”the lens which can change from a wide shot to a close-up with a flick of a switchâ€”and one English-designed Zoomar. Three cameras were on stageâ€”two on pedestals and one mounted on a crane dolly.

Simultaneously, a radio broadcast of the event was being carried, using much of the same equipment and program material. In the improvised radio booth, constructed off stage left, one engineer monitored the orchestra. A feed from his equipment went to the radio engineer in the same booth, while another leg of this same feed went to the television-audio engineer who mixed it with the TV portion of the program. Similarly, a feed from the TV-audio system, with dialogue from the Pantages stage and the audio portions from New York and Philadelphia, was made back to the radiobroadcasting equipment. Another set of amplifiers, bridged from the TV equipment, fed the PA system inside and outside.

Installing the equipment was something else again. A doorway adjacent to the stage had to be removed just to bring in a camera crane and its equipment.

At least a dozen holes were drilled in the stage floor in order to get cables through to the basement before the realization came that it was a double-concrete structure. The camera cables ended up being run through the plenum chambers of the heating system. To get to the camera on the crane across Hollywood Boulevard, they had to go through the gridiron (the framework above the theater stage supporting the pulleys that raise and lower scenery), through the ventilator, across the building roof, which is in three levels, to the marquee and then across the street.

“But the trolley-car maintenance crew,” said an engineer, “took the camera cables over their high-voltage lines across the boulevard for us.”

Close to the television booth backstage was an improvised telephone control center roped off in a corner. Here all of the incoming and outgoing video feeds were regulated and monitored.

“Really, there were no problems to speak of,” a telephone supervisor said, “for NBC gave us the order in plenty of time, with at least four full days to install equipment.”

While NBC had one microwave, the telephone company had eight. They actually used six, with two in reverse. Six circuits and two spares all were going to their Gower Street control center in Hollywood. In addition, there were eight audio lines for radio and TV, one circuit each for production and engineering, and a private phone to connect Donald O’Connor to the studio in Philadelphia, not to mention many business telephones.

Equally as interesting as the split-screen effect was the method of delaying the arrival time of the video signals from the Hollywood film studio and the Burbank commercial studio in order to tie them all together at the Pantages, thus allowing fades from one to the other.

Precaution is an engineer’s middle name. He is always ready with an answer if a crisis rears its head. Therefore, that afternoon the crew used the emergency gasoline-engine power supply for the rehearsal, just to be sure it would carry the load if needed. As stand-bys, there were a special 1000-ampere d.c. generator for lighting and the telephone company’s separate gasoline generator.

Throughout the day, as problems cropped up, they were speedily solved. There was no complete rehearsal, only segments. A microwave cable had moisture in it, but it was replaced. There was a round-robin feedback but it was remedied by reducing the speaker level in Philadelphia.

It was certainly no accident that the final star-studded production glided by as smoothly as an Olympic skier. So closely knit was the show, few people realized the dancers in the commercials were in the Burbank studios, yet using the orchestra music from the Pantages Theater, several miles Â«away, that Philadelphia and New York were not sitting in the front-row seats and that the insert from Mexico was a film from another: studio.